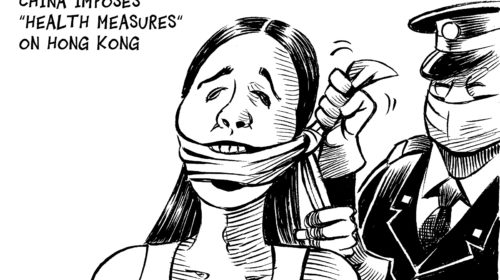 UPDATED 21 September, 2020. As part of Global Geneva’s regular profiling of cartoonists collaborating with the Geneva-based Cartooning for Peace Foundation, we examine the position of Patrick Chappatte, a Lebanese-Swiss, who, amongst other papers and magazines, has been working with the International Herald Tribune (now International New York Times) for the past 21 years.

In early June 2019, the New York Times announced its decision to halt the use of political cartoons. This was primarily because of the social media fallout that erupted from the paper’s publishing of a cartoon by Portuguese cartoonist Antonio Moreira Antunes. It portrayed a blind US President Donald Trump with a Dachshund-like Benjamin Netanyahu, Prime Minister of Israel, on a leash. According to critics, the cartoon was anti-Semitic. Others, however, including numerous cartoonists worldwide, argued that this is precisely what cartoonists should be doing, notably embracing political satire. Good cartooning, they say, cannot be politically correct. A similar furore arose when the Danish newspaper, Jyllands-Posten, published a series of cartoons considered to be anti-Muslim in 2005, sparking world-wide protests, including threats against both the cartoonist and paper.

According to the NYT editors, Chappatte will no longer be producing his twice-weekly cartoons, but will still collaborate on projects. The question for many, however, is whether the much-respected US daily has now embarked on the slippery road of self-censorship and political correctness, ultimately threatening freedom of the press and even heralding the end of political cartooning.

A reminder: our content is available free worldwide in the public interest. If you like what we do, please become a Support Member of Global Geneva Group, our Swiss non-profit association, or DONATE.

The caricature by Antunes was initially published by Espresso, a major Portuguese weekly, and offered to the New York Times as part of a syndication service. It was then used in the NYT’s international edition provoking a broadside of criticism, particularly in social media, claiming that its portrayal of the two political leaders with Trump wearing a kippa (skull-cap) and Netanyahu a Star of David medallion was blatantly anti-Semitic. Two days later, the NYT announced that its publication had been an ‘error of judgement’.

The editors of the NYT  then offered a somewhat grovelling apology noting that “such imagery is always dangerous” and particularly at a time with anti-Semitism on the rise “it’s all the more unacceptable.” The paper went on to maintain that such an incident would not be allowed to happen again and that the paper would revise its editorial process. It also announced that it would terminate all its syndication contracts as well as end the publication of daily political cartoons, including those by regular graphic editorialist Patrick Chappatte. According to opinion editor James Bennett, the paper had already stopped running political cartoons in its North American edition, so there was really nothing new about its decision.

For many, however, the NYT’s catering to political correctness sparked even more outrage, particularly amongst journalists and cartoonists. They condemned the paper for its ‘cowardice’, ‘feebleness’ and ‘lack of commitment’ to a free and outspoken press. According to Plantu, chief cartoonist for Le Monde and a founder of Cartooning for Peace (a Global Geneva media partner), the move was ‘stupid’ as it endangered democracy and freedom of opinion. He could not imagine, he said, “a newspaper without political caricatures”. For Marianne, a French weekly, the decision was like “killing a mosquito with a bazooka”.

Some went even as far to say that the NYT editors were no better than the autocratic political leaders around the world who seek to stifle the right of cartoonists to express themselves. Among the latest victims: Turkish artist Musa Kart, currently in jail, and Zunar, a Malaysian cartoonist and 2016 Cartooning for Peace laureate, who has faced 43 years imprisonment for sedition under the previous regime before it was voted out in 2018. According to British cartoonist Martin Rowson, who described the NYT move as pompous and hypocritical, this is also why five cartoonists were murdered in the offices of Charlie Hebdo in January 2015. Or why dozens of British cartoonists were on the Gestapo death list during World War II.

So where does this leave Patrick Chappatte, who works between Geneva and Los Angeles,  and is known professionally as Chappatte? How does he see his role as a cartoonist, or graphic editorialist as he describes himself, in the early 21st century, when so much of the press is under attack?

Chappatte, who also draws for the Swiss dailies Neue Zürcher Zeitung and Le Temps as well as the German weekly, Der Spiegel, says the Portuguese cartoon should never have been published by what he describes as the “world’s best newspaper.” For him, it has also brought enormous disappointment. “All I can do is sigh when I put down my pencil. So many years of work, destroyed by a single drawing, not even by me.”

For Chappatte, who was born in 1967 in Karachi, Pakistan, of Lebanese mother and Swiss father, his own “unique freedom to draw has always been guided by an enormous sense of responsibility.” It is this professional commitment, he maintains, that enabled him to produce two cartoons a week for the International Herald Tribune (later International New York Times), a collaboration that began in 2001. It also led him to win – as the first non-American – three unprecedented Overseas Press Club Awards (formerly known as the Thomas Nast Awards) for his drawings on international affairs in 2011, 2015 and 2018.

Chappatte, who first drew attention to the NYT decision to cancel cartoons in his personal blog, noted that he thought Americans understood the concept of political caricatures. However, as he also pointed out, “that was before…” A number of America’s best cartoonists, he maintains, “have lost their jobs because their editors considered them too critical of Trump.”

As a cartoonist, Chappatte has spent considerable time focusing on editorial collaboration with other cartoonists, particularly in conflict zones such as Syria, Gaza and Lebanon, with the goal of promoting dialogue through cartoons. Since 1995, he has worked in what is known as comics journalism, which seeks to use cartooning and reporting tools as part of graphic novels. Also published by the NYT, these include Plumes Croisée (Crossed Pens), an initiative that has taken him to the slums in Nairobi or to report on gang violence in Central America. In a similar vein, he has undertaken educational workshops supported by the Swiss Foreign Ministry aimed at street kids. 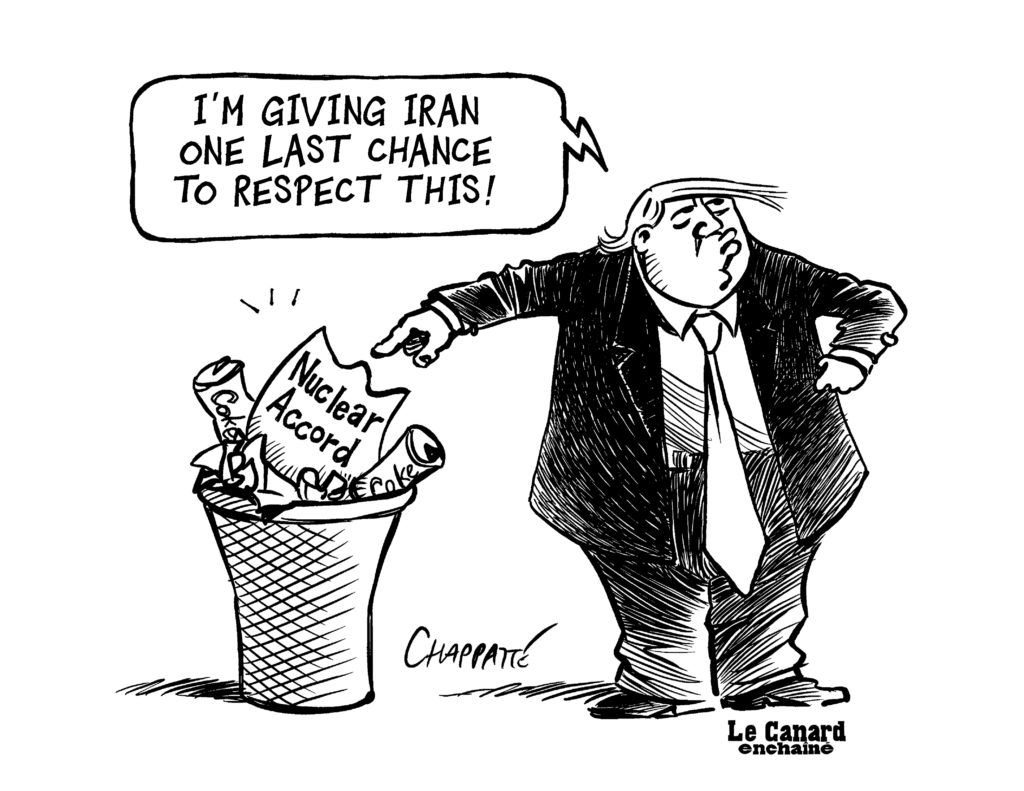 Social media do not serve debate, but promote polemics

It is for this reason that Chappatte’s reflection on the role of cartooning is more subtle if not profound. Freedom of expression and satire need to be properly managed, he maintains. This is one reason why he helped found Cartooning for Peace in October 2006 in Geneva, together with Plantu and former UN Secretary General Kofi Annan. He is currently its Vice-President. The suppression of cartoons by a newspaper as influential as the NYT also points to the insidious role of social media which, he says, “do not serve debate, but rather promote polemics.”

“Perhaps we should start getting worried. And to be disgusted,” Chappatte declares. “Press cartoonists were born with democracy and when our liberties are threatened, they themselves are menaced. But I fear that it is not just the drawing of caricatures which is under threat, but journalism and freedom of opinion in general.”

“We are living in a world now where moralistic crowds inundate social media and rise up like a storm…These demand immediate public actions by editors leaving no room to ponder or to engage in dialogue,” he continues.

So how to resolve this? For Chappatte, one solution is to encourage journalistic colleagues to “stop being intimidated by angry throngs. In this mad world, we need visual commentary more than ever…as well as humour.”

Despite having sacrificed its star cartoonist on the altar of social media brouhaha, the New York Times has proposed continuing its collaboration with Chappatte, but through other projects that do not entail political cartooning in its Opinion pages. These include developing new graphic novels or visual reportages along the lines already produced by their star artist.

As one of the world’s leading and innovative cartoonists, Chappatte has little need to distinguish himself. Among his books is a ‘BD’ (comic strip) of his visit to the Elysée Palace in Paris. Together with Plantu, Chappatte also helped raise funds for the Cartooning for Peace Foundation by doing ‘live’ drawings during a direct broadcast of the Suisse Romande Orchestra.

One particularly powerful project was Inside Death Row, a five-part graphic journalism series for The New York Times, the first time the paper had ever published this form of graphic journalism. Created in 2016 together with his wife, journalist Anne-Frédérique Widmann, the project emerged from a larger initiative, Windows on Death Row, aimed at fostering a conversation on capital punishment. It was also part of a broader art exhibition bringing together works from U.S. editorial cartoonists and contributions by death row inmates, who were invited to illustrate the reality of isolation.

The Swiss cartoonist’s ability to express himself also lies within the perfect symbiosis that exists between his subtle pencil strokes and an open, universalist mind. Together with his family, he lived in different parts of the world, notably Lebanon, Singapore and the United States, before coming to Geneva to work as an intern with a local newspaper. He also used this time to develop his graphic talents.

Chappatte’s persistence finally paid off. Not only did he emerge as a perceptive and incredibly creative cartoonist for different quality newspapers, but he made it to the ranks of the New York Times. He did this by patiently convincing its editors that they needed a more international perspective that only he as an artist-cartoonist-journalist could bring. Chappatte cartoons began assuming a prominent place on the opinion pages of America’s best known newspaper.

Is political satire no longer welcome?

“This is the amazing thing about American pragmatism. There is a certain spirit that I appreciate and from which one can always learn. They know how to listen and give you a chance. If an American editor says, sure, let’s do it, it’s convincing. In Switzerland or France, on the other hand, they would tell you: you haven’t understood. I told you no! They would have looked at my proposal as a form of jostling for power. I was only able to publish my drawings in the United States because I lived in New York and understood how it all works.”

For those concerned by the need to encourage a more vibrant and independent press, particularly at a time when independent journalism is under attack, it is hard to grasp why such a reputable newspaper as the New York Times almost immediately kowtowed to the clamours of social media. And in the process not only opted to curb one of the world’s leading cartoonists, but also send a message that critical satire is no longer welcome. The question now is whether Chappatte – and other cartoonists – can convince not only the NYT but other papers that have also dropped graphic satire that such critical voices are desperately needed.

Luisa Ballin is a Swiss journalist and contributing editor to Global Geneva.

Patrick Chappatte. You can visit his website at: https://www.chappatte.com/en/

You can also read his essay: The end of political cartoons at the New York Times.