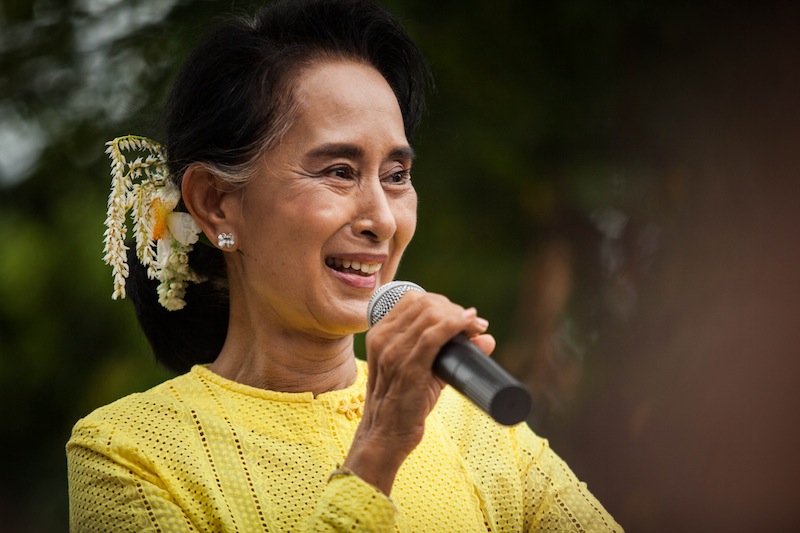 Reverently, she is known simply as “The Lady.”

For the last 20 years Aung San Suu Kyi was a captive in a lake shore home that advertised the power of her military minders. Yet for more than two decades she was the most formidable enemy a military regime could face: the intelligent daughter of a national hero, willing to sacrifice all, children and husband, to prepare her country for a new century. Quietly she defied them.

Her plight stirred the world.

And in an effort designed to keep both her and her country’s hopes alive,  the world rallied around. Each year, it seemed, there was a coveted prize awarded to the captive Lady (the most notable being the Nobel Peace Prize in 1991). It all served to remind her captors that, although she was silenced and isolated, she was not alone. Her saviours created an idol, and icon, who the humanitarians felt sure, due to their exhaustive efforts, had to be dedicated to democracy and human rights. It was that image that kept her alive.

Today she is the unelected leader of Myanmar, or Burma. In the eyes of the vast majority, she is the destined saviour of the country. Her international supporters clearly hoped that she would become the Mandela of Asia. But the first 100 days of her rule have left many of her supporters staggered and depressed. Her priorities, the world thought, and she avowed, were clear: She would heal the country, stop the genocide of the Rohingya, negotiate the integration of the ethnic armies into Burmese society, re-make the country as the agricultural breadbasket of Asia, as it once was, and restore the pivotal position Myanmar once held in the region.

Instead she is rapidly losing support and at the same time raising doubts about whether she is still  capable of leading a democratic society.

Internally, the most pressing political problem is continued conflict with the well-armed ethnic armies that rule large swaths of the country. Observers say they have little to be hopeful for a resolution.

Henry Bragg, a Kachin Independent Army spokesman sums up the misgivings: “We trust her personally,” he says, “but we do not trust her politically.”  Other ethnic army leaders complain that she has not reached out in a meaningful way and that their efforts to reach her have been met with silence. “She is not building a government that will last longer than her tenure,” another critic despaired.  “All the decisions come through her. She is 71. We can negotiate with her now, but where will be when she is gone if there are no institutions to ensure the agreements last?”

In the agricultural sector, the foundation of the economy, farmers voice the same refrain. Once the breadbasket of Asia, the nation was reduced under military rule to largely subsistence farming. When Aung San Suu Kyi assumed power, hope blossomed that agriculture would be restored and modern farming techniques would swiftly transform the countryside. Instead, 100 days into her rule, “Nothing has changed,” says a New Zealand agricultural expert. The expert has spent the 100 days waiting for a meeting with government officials.  He now suspects that that is not likely to happen.

“The country has gone from one party rule–the military–to one person rule,” he explains. “That is dictatorship. And people are just starting to use that word. Nothing happens with out her and she cannot rule that way. They system has to open up,” he argues.

Even more perplexing is the recently announced decision not to close down state media enterprises that acted as the military’s main propaganda weapons. At a conference in May Myanmar’s main foreign supporters, and dozens of companies and journalists that wanted to start independent media organizations, expected to see the dismemberment of the general’s vast media machine. Instead, Information Minister U Pe Myint announced that the military state’s news organs would not be closed. Representatives from several nations, who had hoped to create a new and free media as the basis for democracy, were dumbfounded.

“You have to understand, as long as there is a state media there can be no free press,” explained one angry diplomat, who asked not to be named. “Businesses think that if they do not advertise in state newspapers or on state television and state radio channels they will be targeted for reprisal or viewed with suspicion. That is the way it has been. As long as state media exists there will be no economic support for any another newspaper, radio station or television outlet. If the state media exists, no free press can survive economically. There simply will be no money to run them without  advertising,”

And then there are the Rohingya.

To all those who supported her in captivity there was one thing that seemed certain: When Aung San Suu Kyi took the reins of power she would move quickly to stop the genocide against the 1.3 million Muslim ethnic group.  Increasingly, it looks as though this is the one issue on which her international reputation will rest. Again, all hopes of a swift and humane settlement have vanished. Human rights groups now face a dilemma: how can they resolved the paradox that the women they made a symbol of human right now appears to be a major violator of those very rights she embodied.

Of the 136 ethnic groups in Myanmar the Rohingya are the only one that has been denied citizenship and what that entails—namely health care, the vote, the right to work and some would say survival. The Rohingya have been described as “the world’s least-wanted people”. In the past few years they have been herded into IDP (Internally Displaced Persons) camps run by the military and armed police, and they have become the targets of ethnic cleansing by an increasingly militant radical Buddhist movement.  To escape targeted violence,  they have been forced into fleeing by sea in a refugee boat lift that increasingly resembles the one challenging Europe.

In fact, Aung Sang Suu Kyi dressed down the American ambassador for openly using the name Rohingya. She wants the group referred to as Bengalis. The implication is that they do not belong in Myanmar.  She has shown no visible inclination to take action that would stop the violence. Instead of finding common cause, She makes it clear that the Rohingya can expect little help from her.

Tensions over the issue have become so inflamed that US Secretary of State John Kerry made a brief stopover to discuss the issue  on his way to meet President Barak Obama in his historic visit to Vietnam.  Myanmar needs to “promote respect for human rights, and to benefit all of those who live in Rakhine and throughout Myanmar, and that’s what we’ve come here to say to the minister,” Kerry said, emerging from the meeting for a quick, three-question press conference.  Kerry made it clear that little common ground had been found. Aung San Suu Kyi asked that she be given time and for outsiders not to interfere.

“We see no hope from the new government,” Kyaw Hla Aung, a Rohingya leader living in the IDP camp in Sittwe said.

The Associated Press even asked if she was a “fallen star”. Yet while the assessment of her first 100 days is bleak, it is still the early days of her rule.  Her supporters argue that there is time for things to change. While hard pressed to name significant accomplishments, they argue she still has widespread popularity and that it is probably unfair to use the traditional 100-day mark make as a measurement of progeress since the problems are so immense.  She also has to deal with sharing control of the government with the military.

Requests to get an interview that might have helped qualify her version of events went unanswered by her office and the Ministry of Information.

“She has been in isolation for 20 years,” explained one supporter.” she just needs more time to  learn and to grow,”

Time may make a difference. Her former supporters are just not so sure anymore.

Ed Barnes is an experienced foreign correspondent, who has covered most of the world’s trouble zones including years as an investigative reporter for LIFE and TIME Magazine.