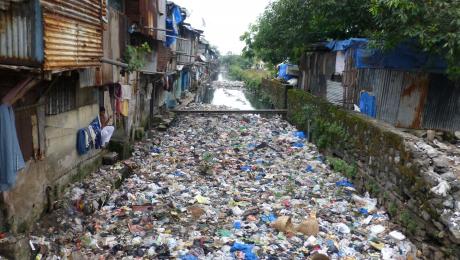 Earlier this year, a 27-year-old Belgian researcher, Lieven Devreese, did just that. And not only did he rediscover the lost colobus, he also took the first photos ever of this long-elusive species. “Our photos are the world’s first and confirm that the species is not extinct,” Devreese said. Although described by scientists in 1887, until now Bouvier’s red colobus was only known from a few museum specimens over a hundred years old.

To get to the monkey’s swamp forest habitat, Devreese and his local assistant, Gaël Elie Gnondo Gobolo, traversed deep rivers through some of the remotest forests on the planet. “All transport occurs on the river, which is expensive, and the forest is often not easily accessible because of the water level,” said Devreese. “Wading through waist-deep mud doesn’t make it easy to look for monkeys. The people are not used to see biologists with binoculars and GPS’s deep in these forests and that sometimes created suspicion, at least initially.”

When they arrived in the area where locals said the monkeys persisted, high water levels made it difficult to locate any primates.

“We searched for several days and changed location twice,” Devreese said “I was getting desperate and starting to feel frustrated, because the local people will always tell you [the monkeys] are numerous and we are guaranteed to find them. So when we finally found them the last day in the national park I felt a lot of satisfaction.”

Devreese and Gnondo Gobolo made their first sighting on the Bokiba River in the Republic of Congo’s Ntokou-Pikounda National Park, one of the richest parks in the area home to around 15,000 lowland western gorillas, 950 chimpanzees, and 800 forest elephants.

The pair were aided by support from the Wildlife Conservation Society (WCS), which helped set up the park and continues to work in the region. WCS provided survey information, research permits, and connected Devreese to Gnondo Gobolo.

“We’re very pleased indeed that Lieven and Gaël were able to achieve their objective of not only confirming that Bouvier’s red colobus still exists, but also managing to get a very clear close-up picture of a a mother and infant,” saidFiona Maisels, a conservation scientist with WCS.

Still, for information on the monkey’s possible whereabouts, local people proved the most important source. 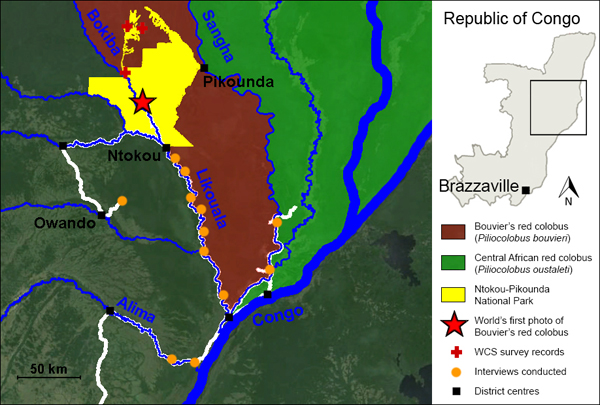 Map of the expedition area showing the route the team followed, the Ntokou-Pikounda National Park where Bouvier’s red colobus was observed, and the different sites where information was obtained from local hunters. Map by: Lieven Devreese.

“We relied mostly on information provided by local hunters. We asked them to name and describe all monkeys they know and checked their reliability by testing their knowledge of vocalizations of different monkey species in the Congo Basin,” said Gnondo Gobolo. The pair believes the species may also be found along one side of Likouala and Sangha Rivers, though were not able to confirm this.

While the rediscovery of Bouvier’s red colobus is great news, it also opens up a number of questions. The most pressing being how endangered is the species? Currently the IUCN Red List considers the species Critically Endangered given a small range and likely massive pressure by the booming commercial bushmeat trade.

“When talking to the local people, we learned there is an active trade of bush meat using the rivers as highways. When the forests are not inundated, only a couple of months a year, commercial hunters shoot whatever they can and empty the forest,” said Devreese, who added that the meat is not meant for local, rural consumption but instead smoked and sent to urban cities like the capital, Brazzaville. 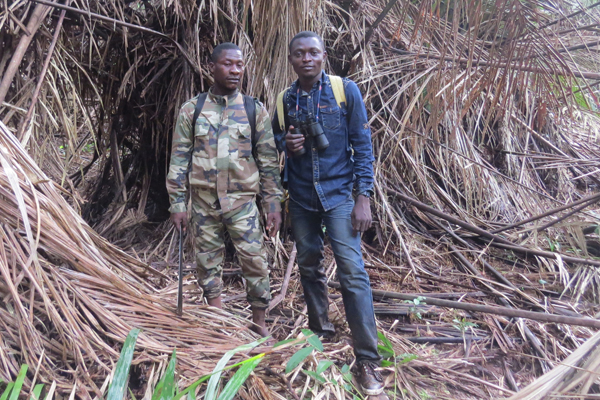 Gaël Elie Gnondo Gobolo on the right and a park ranger on the left. Photo by: Lieven Devreese.

“Huge dug-out canoes loaded with deep freezers and generators go up the river to collect meat from the most remote villages and hunting camps,” noted Devreese, a system that WCS said is also used in Gabon.

Devreese said that red colobus behavior makes them particularly vulnerable to this industrial-scale hunting. Unlike many primate species, red colobus don’t generally hide from people. Instead, when confronted by hunters they either act curious or aggressive, allowing hunters to kill them en masse. Worse still, since red colobus travel in large groups, hunters can slaughter dozens in one site.

Devreese said his ability to get a clear photo of a mother and baby proved “how vulnerable they are to hunting.”

“This adult female with her offspring was in perfect sight for more than twenty minutes,” he said. “At one point she was even closing the eyes…Often they just don’t realize people represent a real danger.”

The fact that the species was rediscovered in a protected area may offer some protection, yet Ntokou-Pikounda National Park is only two years old and like most parks in the region needs much more support. 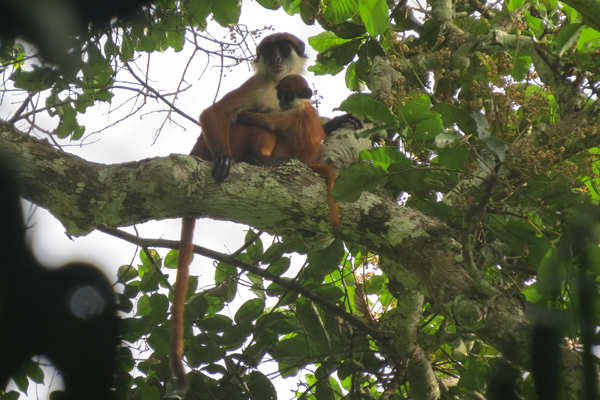 “Probably the park exists mainly on paper, but I had the impression that commercial hunting has been banned already,” Devreese said, adding that “there is a motivated team of park rangers and other staff.”

Maisels, however, pointed out that the park means the monkeys are “protected from threats such as logging, agriculture, and roads, all of which can lead to increased hunting.”

At just 27, Devreese may appear an unlikely candidate to rediscover a lost species, but he’s had years of experience studying primate in the Congo. He is currently hoping to start a PhD on the subject soon. His local assistant, Gnondo Gobolo, just 25, grew up near Nouabale-Ndoki National Park and is currently studying at the Marien-Ngouabi University in Brazzaville.

In order to conduct the wild expedition, Devreese depended partially on raising funds from the crowd-sourcing website, Indiegogo.

“In Dutch we say you have to ‘bet on more than one horse’….In reality the crowdfunding was about 20% of the total budget, but because I found it very difficult to estimate the real costs for such an adventurous expedition, every extra bit of funding was useful,” he said. 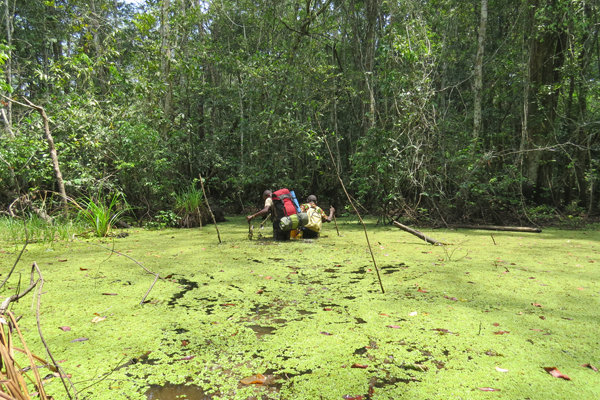 Two expedition members struggling to get through a mud pool in the swamp forest along the Sangha River. Photo by: Lieven Devreese.

Devreese noted that crowd-sourcing funding was a good tool for independent expeditions like his, since one could raise money by targeting lots of small donations instead of seeking a lot of money from just a few donors.

“I believe there’s really an ‘art’ of crowdfunding,” he said. “I mean, to do it well (efficiently), you need to think and plan the different steps of getting attention for your project properly. The media is of course a good way to get attention for conservation and your project.”

There still remains debate about whether Bouvier’s red colobus is indeed a distinct species or a subspecies, known as Procolobus pennantii bouvieri. Currently the IUCN Red List dubs it a subspecies under another Critically Endangered colobus, Pennant’s colobus (Procolobus pennantii). However other authorities have upgraded it to species-level. Devreese and his assistant collected fecal samples from Bouvier’s red colobus and hope to conduct the first genetic tests on the monkeys, which should help put the mystery to rest.

Since no one has ever studied the species, Devreese’s work will be vital if Bouvier’s red colobus is to survive the century. 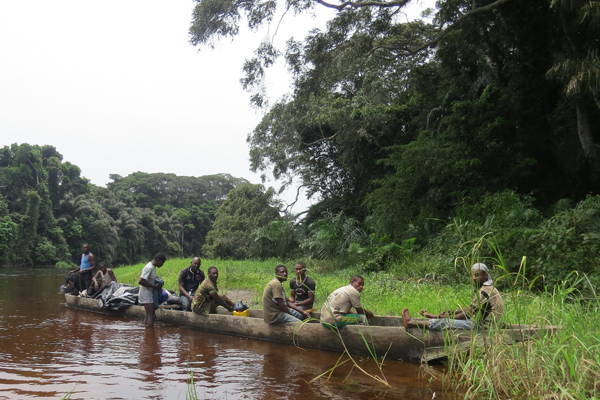 The expedition team in a dug-out canoe during a break on the Bokiba River in the Ntokou-Pikounda National Park. Photo by: Lieven Devreese.

This article was first published by Mongabay.com

“Mindf*ck”: Adventures with the Cambridge terminator

Kurdistan: After such knowledge, what forgiveness?