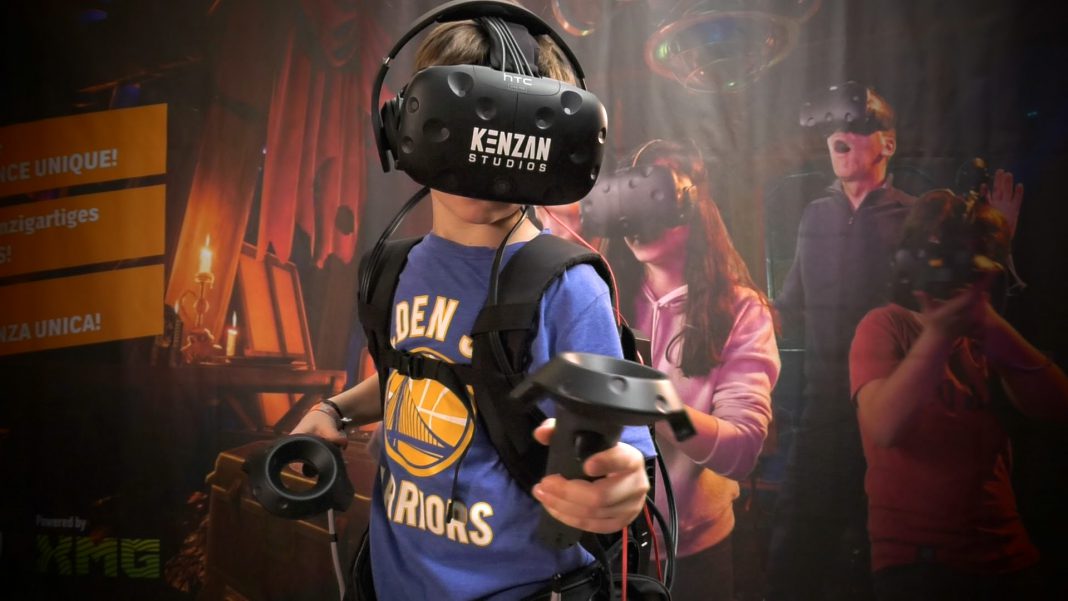 Extended Play is a conversation with Swiss innovators and entrepreneurs at all stages of the development cycle. Today Pascal Conicella, Founder and Creative Director of Kenzan Studios, walks us into the future of VR entertainment and upgrades the way we see storybooks.

GG: Kenzan Studios SA  is a games developer in the highly coveted space of VR gaming. Your company recently secured CHF 5 million in Series A financing, and is presently gaining notoriety in Silicon Valley. It seems your work is having a visible impact on the entertainment sector worldwide.

PC: It is incredible really. Just yesterday, we presented Kenzan Arena games at the Silicon Valley Virtual Reality (SVVR) conference in San Jose, with approaches from American, Swedish, and Czech businesses who want us to build similar VR sports arenas like the one we’re building in Zurich.

GG: That is funny though, being a Swiss company, you have to voyage to the United States in order to catch some European clients.

PC: This is just the reality of the bigger VR trade shows. VR is making quite a buzz now, and we’re seeing more and more demand for VR within amusement parks and theme parks, so Kenzan is selling this as a franchise.

GG: By the looks of it you won’t be doing outbound sales much longer. All the clients are coming to you.

PC: The feedback has been very strong, we had really good results from the Silicon Valley expo. It’s great to see that our work has an impact and makes people happy. HTC, a leading supplier of VR headsets and peripherals said to us, “Who are you, where did you come from? How is it possible your first game is surpassing the competition?” So now HTC will help us on promotion and marketing for our flagship series, The Fantastic Voyages of Téo & Léonie.

“It’s great to see that our work has an impact and makes people happy.” – Pascal Conicella

GG: It means HTC is taking on the role of publisher, focusing exclusively on VR gaming. That may surprise a lot of people who think VR is too niche to go mainstream. VR is also gaining traction in Switzerland as well.

PC: Via the Festival Tous Ecrans we’ll be going to Cannes this year in May, as part of an initiative supported by Pro Helvetia to promote Swiss innovation in the audiovisual sector.

GG: What is this all leading up to, satellite offices in Silicon Valley or elsewhere?

PC: Several regions are very interesting for us. One is Tel Aviv, where there is tremendous artistic and technical capability. Also in the United States, Santa Monica and San Jose are attractive for the same reasons. We also see great potential in Moscow, where Russian cinema is flourishing, making films which are on par with the quality of American films. The only reason we don’t see them is due to poor distribution.

GG: And we’ll see the first Kenzan Arena opening-up in Zurich this summer, given your new partnership with Coop stores. This is a glimpse into the future of VR entertainment, if you can tell us what we might see?

PC: Kenzan Arena offers different types of play. We have the ‘Lost Pit’ which is squad-based play aimed more at teenagers and young adults. This is a gladiator type game where you have two teams of six, like an elimination game, with machines flying overhead. The second property is called EnigmAttic, which is more for families, where you wield a virtual sceptre to solve puzzles and enigmas, based on the Téo & Léonie series.

GG: The Fantastic Voyages of Téo & Léonie is in fact a collection of books destined for children 5 and up, which mixes fantasy with historical tales.

PC: Each book covers historical events, covering different populations and geographies. Children today in schools struggle somewhat with the subject of history. Teachers as well. Children aren’t listening, not learning, show no interest. So I wanted to write a book with a fantastic history, but which was grounded in fact.

GG: And your central character, who join forces with the sister and her little brother, is none other than Leonardo Da Vinci.

PC: Yes, the story is about two children growing up during WWI – who happen upon a magical necklace in the attic. Suddenly they find themselves 500 years in the past, in Leonardo Da Vinci’s home, with the man himself. So now Da Vinci befriends Téo & Léonie and tries to return them back to the future. But as Leonardo Da Vinci is always making mistakes, they end up visiting the dinosaurs, then off to see pirates, then to ancient Egypt. They end up travelling the world, at each instance witnessing historical events.

GG: Which is interesting, as this storyworld came to life during your visit to the Château d’Amboise.

PC: Myself and Mélanie Corbat, who is the co-author of the Téo & Léonie series, do a lot of travelling together, and it was through these trips we started having ideas. Château d’Amboise is where Da Vinci spent the last three years of his life, as a guest of King Francis I, at his maker-lab in Clos Lucé which was connected to the château via underground tunnels. Visiting this place I knew we had a story.

GG: For each book there’s a travel diary of sorts, which you’ve documented personally. We rediscover the actual home of Da Vinci, examining his life, explaining to children that in fact the history they’ve been reading is real.

PC: What’s great is children believe that Da Vinci is travelling through time. With this we can tell amazing stories. Children take part in these fantastic tales at the same time they’re learning. Teachers are always coming back to us saying how much the kids love the story, listening from start to finish. Then by the end of the story, they actually know who Leonardo Da Vinci is.

“Kenzan is lucky to have investors who give us creative freedom, to do our work and we do it.”
– Pascal Conicella

GG: I can honestly say my daughter, having read the books, can tell you everything about Leonardo Da Vinci. She also wants to build robot dragons, just like Da Vinci. This type of imagination-building is extremely important, which as a parent I hope we’ll be seeing more of.

PC: Yes we’re currently in pre-production for the TV series. What we’d really like is for Téo & Léonie to be the first audiovisual series which has as much success on television as it does within VR. Children will literally have the chance to travel with Téo & Léonie on a pirate ship. This is something you can do with a mobile phone and VR headset, giving children the power to dream, to inhabit the storyworld.

GG: I’m still not used to the idea that children of 6-7 yo are digital natives and perfectly at ease waking up in the morning, reading stories on smartphones and tablets. That is, instead of books

PC: With VR and AR we are certainly breaking a few traditions. We’re running VR expos with Co-Op in Zurich for virtual Easter egg hunts, where children wear the VR headset having virtual water guns, and when you hit the little chickens an egg pops out.

GG: That could really solve the dearth of children’s entertainment we have here in Geneva. For parents of small children, certainly under 10 years, the quality of animation here is rather poor.

PC: If things go well with Co-Op in Zurich we’ll have the opportunity to bring these type of VR games to other Swiss cantons, hopefully Geneva.

GG: Many in your same position might not resist the urge to leave Switzerland, for say, greener shores. Imagining the level of success you can have abroad, you decide to stay here. What is it that keeps you in Geneva?

PC: Well, I just like it. I grew up here, it’s a beautiful city, and what is nice about Suisse-Romande is there is a lot of hidden talent. If we uncover this talent we can do wonderful things.

GG: As independent creators what you’ve accomplished is exceptional. You escaped the regime of cultural subsidies for the arts which is quite prevalent in the Rhônes-Alpes region. Was this an active decision?

PC: Absolutely. This dependence on subsidies in the European audiovisual sector is extremely limiting. It constrains our imagination and our ability to work. Because the pool of cultural funding is so limited, broadcasters are able to come in with various stipulations regarding your work. For instance, a buyer determines they won’t acquire Téo & Léonie unless we give the characters pointy ears or something.

GG: This often happens at the finishing stage of production, after months if not years of work, your product is ready for pre-sale, but now the broadcaster orders revisions for the entire series.

PC: This doesn’t happen in the United States because there is no subvention economy. Producers get behind the artists to realise their vision, and this is very gratifying. Kenzan is lucky to have investors who give us creative freedom, to do our work and we do it. There’s no limits. This is how we brought Téo & Léonie to life.

GG: You really are pushing boundaries with this creative freedom, as the development pipeline for Téo & Léonie is extremely ambitious.

PC: We’ve already produced the first six books, we’re now working on four more editions. I’m presently working on the television series and an adaptation for cinema. All of this is possible because I have the liberty to create.

GG: And the four books are available in stores now?

PC: Yes the first four books are available in Switzerland and France, sold in FNAC and Payot stores, and the fifth will be available in April during the Geneva Book Fair. We welcome everyone who can get there to come and see what’s in store for VR entertainment. We have something really exciting for children and the big kid in all of us.

Join Kenzan Studios at the Geneva Book and Press Fair at Palexpo from 26 – 30 April, featuring the newest edition of Téo & Léonie and VR gaming for children ages 6 and up.