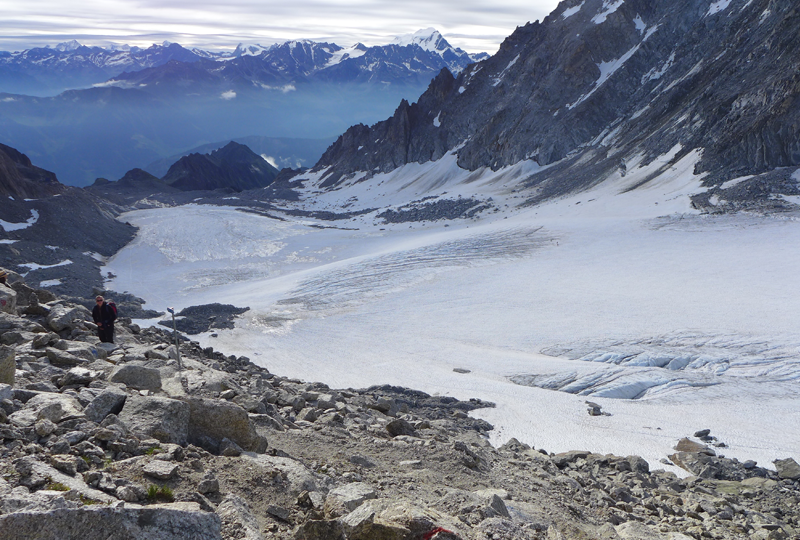 As a child visiting Switzerland with my family during the summer holidays in the 1960s, I used to spend a month in Riederalp, a 2000-meter high resort in the Upper Valais overlooking the Rhone Valley. We stayed in Riederfurka at the Villa Cassel, a Victorian-style hotel – now a Pro Natura information center – with its spectacular panorama of nearby mountains, such as the Matterhorn, Jungfrau and Dom. Just below, you could see the Great Aletsch Glacier, Europe’s largest and now protected as a UNESCO World Heritage site.

In those days, you could take the cable car up to Riederalp and then climb by foot the final kilometre to the Villa. Today, you can still walk but also ‘cheat’ by taking the chairlift. The Villa was originally built by British businessman, Sir Ernest Cassel of Cassel’s Dictionaries as a private summer home for health purposes. Celebrities such as Winston Churchill used to come here until it was turned into a hotel during the 1920s, when it continued to attract renowned scientists, writers and other notables.

When I stayed there, the hotel porter was still bringing up daily supplies by mule from the téléphérique station. I remember accompanying him down to the base of the glacier to cut ice dating back thousands of years for home-made ice cream. Since then, the glacier has retreated almost one kilometre (2.8 km since 1880 according to Swiss scientists), with the last 30 years alone witnessing a pullback of more than 800 meters. The Aletsch is now 23 kilometres long with some 27 billion tons of ice, but fast disappearing. All of Europe’s Alpine glaciers have receded over the past century.

This is primarily because temperatures among the eight countries that constitute the European Alpine region (Switzerland, France, Austria, Lichtenstein, Italy, Germany, Monaco and Slovenia) have risen by just under 2°C — almost twice the global average — over the past 120 years. As organizations such as the Lichtenstein-based International Commission for the Protection of the Alps (CIPRA) point out, temperatures are expected to increase over the next half century by another 2°C. While high altitude ski areas (over 1,600 meters) will still be able to offer reliable snow conditions, this is bad news for lower resorts.

“The opportunities for families and young people to learn skiing and snow-boarding at lower (cheaper) resorts will be reduced, meaning fewer new recruits for winter sports,” said Professor Rafael Matos-Wasem of the School of Management and Tourism at the University of Applied Sciences and Arts Western Switzerland (HES-SO Valais-Wallis).  Rising levels of snow cover, the shortening of winter periods (by 47 days since the 1970s), the reduction of water availability, and the melting of glaciers and permafrost, all jeopardize the security of local inhabitants, tourists, day trippers as well as infrastructure, notably cable cars, chair lifts, restaurants, and hotels, he maintained.

Overall, global warming is causing significant changes in rain and snowfall patterns, notably increasing the risk of avalanches, mudslides and floods, such as the heavy storms that battered Switzerland, France and Italy earlier this year. Higher temperatures are beginning to degrade the permafrost suggesting that the foundations of high-altitude dams and bridges may have to be restructured. As one Swiss geothermal engineer from Sion said: “We human beings tend to forget that despite all our technology, we cannot control nature. All we can do is cope and adapt.”

According to the WWF or World Wide Fund for Nature (also known as the World Wildlife Fund in some countries) based in Gland, Switzerland, these effects are leading to an upward migration of Alpine plants at the rate of 0.5 to 4 meters per decade, with lowland species “displacing them to ever-higher altitudes until they have nowhere to go, forcing them into extinction.” Glacial recession is also affecting other forms of wildlife with still unknown consequences for food chains, but possibly leading to invasions of southern pathogens, bringing new diseases against which Alpine species have no defence.

For Prof. Christophe Clivaz of the Institute for Geography and Sustainability at the University of Lausanne, it is not too late to act, but this means embracing a far more elaborate mitigation strategy. “Switzerland has finally grasped that it needs to adapt to climate change, particularly given that global warming is happening twice as fast here as in the rest of the world,” he said in an interview with the Swiss daily 24heures.

Riederalp is fortunate in that it is a well-known summer and winter resort at a relatively high altitude. Nevertheless, as with other mountain communities, Riederalp is having to think out-of-the-box in order to remain sustainable. Initially, many resorts responded by bringing in snow-blowers, but these can inflict negative side-effects such as a rise in water use. Another was to lay out slopes and build lifts at higher levels. “But this can prove difficult, costly and even dangerous,” said Matos-Wasem.

Tourism planners are now pushing for more visitors from countries such as China, Brazil and India. Yet while this will bring in more cash, the downside is more CO2 emitting air travel. “People are going to have to make choices,” Clivaz said. This will depend on whether resorts will opt for more immediate economic solutions, or longer-term sustainability. “If we manage to stabilize winter tourism, it will be a miracle. So we should stop talking about growth.” The real potential, he added, lies with summer.

“Winter sports will have to change,” agreed Matos-Wasem. He and others believe resorts may have to stop marketing themselves primarily as places for skiing, but as “purveyors of mountains” with ‘four season’ tourism. Ironically, summer or weekend tourism could benefit from rising temperatures in the cities as urban dwellers seek to escape “heat islands” aggravated by automobile traffic and other forms of pollution. Agriculturally, too, it may open up new wine-growing areas. Melting glaciers are also expected to create 500-600 new Alpine lakes.

The emphasis now needs to be on developing activities which would have less impact on the environment, but also ensure longer-term sustainability. Key resorts, such as Crans in Switzerland, Chamonix in France, the Gressoney Valley in Italy and Germany’s Garmisch Partenkirchen are all pushing to broaden their year-round activities.

For Tourist Office representative Miriam Nussbaumer in Leukerbad, a 1400 meter high resort in the Valais, climate change is definitely a problem. “December 2015 was very warm with almost no snow, so it was difficult to prepare the slopes in time for Christmas and New Year’s,” she explained. As a renowned spa town, however, Leukerbad’s thermal baths are open 365 days a year. It is also an official CO2 Neutral Partner whereby warm water is reused for showers or heating local school and community buildings, thus helping reduce CO2 emissions by 90 percent. The resort is constantly developing new activities, such as its summer International Literature and Music Festivals, or guided wildlife and plant tours to the nearby Pfyn-Finges Nature Park.

Mountain tourism is also becoming far more tailored or niche-oriented. Clients in their 50s and 60s or older no longer obsessed by downhill skiing are willing to try snow-shoeing, biking (winter and summer), cross-country skiing, paragliding, trekking, rock-climbing or simply walking to enjoy the clean mountain air. People are increasingly interested in activities such as public lectures, wine-tastings, good food, astronomy, museums or cultural activities, not just in the resorts themselves but nearby towns and villages. Furthermore, even if high-altitude skiing will become steadily more elitist, resorts are seeking to cater to travellers, who normally might holiday in the Maldives or Tunisia, but are now concerned about CO2 emissions and terrorism. Stay-home tourism is steadily becoming the new norm.

Gstaad-Saanenland in the Bernese Alps, for example, now considers “Alpine authenticity” crucial not just for wealthy clientele but ordinary families on weekend or vacation breaks. This includes relaxing, networking and enjoying local cultural heritage to ‘re-charge’ from the stresses of everyday life. “We are far more ecologically aware,” said Kerstin Sonnekalb, head of Public Relations for Gstaad. “People come here because of our preserved natural environment.”

The challenge, too, is how to develop more sustainable tourism that is not only integrated into local economies, but combats CO2 emissions. Clivaz advises German and Dutch tourists to travel by train and to rent equipment on arrival. “Cars pollute the environment 20 times more than anything else,” he said. “Not only would this alleviate the impact of climate change, but would make for a far more relaxing vacation.”

Places such as Chamonix, only one hour from Geneva, are attracting visitors throughout the year for events ranging from extreme sports to bird-watching during migration periods. There is also a rise in part-time or full-time residents, who travel regularly on business, but can work out of their mountain homes using Internet. One South African businessman says that most of his clients believe that he is based in London but is in fact living with his family in the Swiss Alps. “I am up early for the Hong Kong and Singapore markets, but can also go skiing or biking during the day.” This may be part of the future, commented one Swiss Tourism analyst in Zurich. “People who no longer have to live in cities can use non-polluting public transport to attend conferences or meetings, and have their kids go to good local schools. Such people are an incredible asset not just because they support the local economy, but because they have ideas to contribute.”

But does the European Alpine experience have any lessons for mountain regions elsewhere, such as the Himalayas? “The phenomena are basically the same,” explained Matos-Wasem. “But the impact may differ radically because of divergent stages of tourism development. We can foresee rising numbers of Western tourists attracted by exoticism but also even higher existing or potentially feasible winter resorts.” At the same time, different or more specific forms of tourism will need to be developed, such as eco-trekking in Afghanistan, Pakistan, northern India or Nepal, with locals trained to provide B&Bs with basic facilities such as a bed, good meal and shower. Most critical of all, both host populations and visitors need to be better informed about the impacts of climate change – and what they can do about them.

Coping with the lockdown blues and blahs