This article is part of our Global Genevans section to be published in the Autumn, 2018 print and e-edition.

Not long after the Soviets left Afghanistan in early 1989, Jeff Danziger, then working for The Christian Science Monitor newspaper but with his cartoons syndicated in over 100 countries, came out with a pertinent depiction of the Afghan war. It also aptly reflected the tribal and ethnic divisions that existed – and still exist – inside Afghanistan. It was a cartoon of two Afghans, one wearing a woollen pakoul (cap) adopted by northern guerrilla fighters, the other a turban usually worn by Pushtuns from the south. One of them snarls at the other, saying: “Mohammed, now that the Russians have left, I’ve always wanted to tell you: I hate your hat.”

As Danziger, who is a member of the Geneva-based Cartooning for Peace Foundation and a contributing cartoonist to Global Geneva, maintains, this is precisely the role of the cartoonist. To capture a situation with a simple drawing and the fewest words possible.

It needs to be a visual metaphor, a recognizable scene from daily life, a caricature that reflects a subject’s character, whether an egotistical politician, a confused citizen, a brutal dictator obsessed with his own wonderfulness, or a hapless grunt commenting on the stupidity of war in a foxhole. Humanity at its best and worst. “I have always loved to draw and I have had an endless interest in politics. Cartoonists have a particular role in society that is not only healthy, but needed.”

Now in his mid-70s, Danziger is still exceptionally active. And for a journalist and artist with such a strident sense of pen and ink humour, his burly body language hasn’t changed over the years. He initially comes across as dour and gruff, a man with a lot of burden on his back, so one wonders where the incredible sense of humour comes from. But then cartoonists are not supposed to be stand-up comics, but serious commentators of life and politics using humour if not ridicule as a tool.

The experience of war is pivotal

Born in New York City, Danziger attended the University of Denver before moving to Vermont where he first worked in industrial films. (He still lives between New York and Vermont). But this was at the height of the Vietnam War. He found himself drafted into the military and sent to Indochina in 1969 as a linguist and intelligence officer. He later received a Bronze Star and the Air Medal.

On leaving the army, Danziger returned to Vermont where he began writing and drawing for the Rutland Herald (he still contributes to the paper) before being taken on as a cartoonist first by the New York Daily News, then The Christian Science Monitor in Boston. He remained as staff cartoonist for the Monitor until 1996  before returning to New York where he is now distributed by the New York Times Syndicate. Twice, he has been short-listed for the Pulitzer and was awarded – amongst other distinctions – the Thomas Nast Award in Landau, Germany, Nast’s birthplace.

For Danziger, his stint in Vietnam proved pivotal. He saw up close the results of top-down programmes that led to disaster. “This sort of thing makes a lot of people angry, including myself,” he maintains. Yet he has also travelled widely to Europe, Asia, and Russia… Such exposure emerges in much of his work with subject matter ranging from refugees and migrants to human rights abuses, military crackdowns, corruption and financial revelry. At one point, he was even contracted by the International Committee of the Red Cross in Geneva to travel – and draw – about humanitarian crises and conflicts.

Cartoons: the dessert after a meal of news

Having studied drawing both in Boston and New York, Danziger believes that his experience living in Vermont, where politics are very local and people take democracy seriously, has also flavoured his cartooning. Local newspapers – and local perception – have played a particularly key role. For one, the rise of off-set printing meant that there was a strong demand for more graphic images, such as cartoons with their combination of humour and opinion. “I like both very much. And besides, I like to see my name in print,” he asserts wryly.

For Danziger, the cartoon is initially meant to make people stop and think. “People enjoy a humorous take. They like being provoked to think,” he maintains. Furthermore, cartoons can spur discussions amongst opposing opinions. Equally important, “they’re a way to get parents to discuss politics with their kids.”

While cartoons have the means to make one laugh or be amused, they can also make one cry or be shocked, explains Danziger. “In a way, the cartoon is a confection. The dessert after a meal of news. It’s a reward for paying attention.” But it’s also part of an intrigue for trying to figure out what the main point is, or the cartoonist’s thoughts, if he has any, Danziger adds. As concepts, cartoons do not necessarily have to be funny, but it’s a good idea if four out of five are humorous, if only a little.

Danziger considers humour a crucial component of cartooning, but it also goes hand in hand with fantasy and fiction. It’s a “bit of theatre with a scene, actors and dialogue, and, if possible, some comic relief.” For example, a cartoon depicting former US president Richard Nixon in hell, chatting with the devil. “Pure fantasy, but a political point can be made in a humorous vein about how things have gotten worse, more hellish, with Nixon seeing himself as a victim, feeling abused. This sort of thing can be very funny, and gratifying to readers who like the idea of Nixon grumpily suffering,” Danziger explains.

As a means for finding material, Danziger reads four or five newspapers a day, but also online articles from publications like Der Spiegel or Le Monde. These provide him with facts and quotes, plus overall trends in politics and the economy. The latter he finds useful as everyone experiences the economy, and they react to it. He is also one of the few cartoonists today with actual military experience. “So I like to do scenes from my disastrous time in Vietnam,” he says, regardless whether depicting Afghanistan, Iraq, Libya, UN peacekeeping or any other military intervention. “From that idiocy, I think I know – and can point out – the limits of what can be done with military force.”

One area that profoundly concerns Danziger is that of the apparent spread of dictatorial trends, ‘alternative facts,’ and the deliberate manipulation of information, all of which severely threaten the basic tenets of democracy, freedom of speech, and the way people, above all, young people, perceive realities. It is not just US President Trump, he maintains, but also Russia, Turkey, Asia…

As depicted in his cartoons, it’s all about political thugs trying to stifle what they don’t like, or undermining through lies, untruths, and propaganda those who dare to speak out.

Yet this is where Danziger sees cartoons as coming into their own. They have an obligation to ridicule or highlight elements that subvert society, regardless of what governments or the powers that be may think. “Dictators have always hated cartoonists, especially in areas such as Africa where language is disparate. A simple visual will communicate far more effectively than something written.” From Tanzania and Turkey to Russia, Malaysia, and China, however, cartoonists risk their jobs, are beaten up, or menaced with years in jail.

Referring to concerns among the thinking public that Trump is seeking to undermine the press by tarring it as the “enemy of the people” (The Boston Globe and several hundred other American papers recently condemned this in a mass ‘write in’ of editorials) Danziger notes: “I doubt Trump will be able to make any lasting dictatorial changes but he will illustrate what might happen if a dictatorial urge were in the hands of a more intelligent, capable person.”

Why would anyone wish to be a dictator?

The root of these urges, Danziger suggests, is a desire for stability. Many ordinary people are willing to accept decisive dictatorial control because they believe it demonstrates firmness even if focused on blaming others for it, such as migrants. “They believe that it will resolve their problems, such as unemployment or massive personal debt. People often want this more than individual freedoms.” Such urges come from the experience of destabilization following wars or economic collapse. Dictators will invent this destabilization to solidify their rule. “But I must admit,” muses Danziger,  “I wonder why anyone would want to become a dictator. It’s a mystery to me. Seems like a hellish existence.”

And yet, the Trump administration clearly obsesses Danziger. Perhaps more so than before, his cartoons seem to dwell on different aspects of the presidency but also much of the fallout brought up with the judiciary, military, Congress, and life in general, notably the supposed need to make  “America great again.”

During the editorial discussion with Global Geneva, when it wanted to feature a cartoon of Trump on its front cover, Danziger pushed for a slovenly SS-style depiction of the new US president. While liked by the editors, it was felt that such portrayal was too early for a new magazine seeking to reach out to a genteel International Geneva community. Instead, it opted for a Humpty-Dumpty version with Trump falling off the wall. Disappointed, Danziger argued: “You need to understand what’s happening here in the United States. We’re in Weimar, 1932. We need to speak out.”

As a political commentator, Danziger does not restrict himself to cartoons. He also writes, as he puts it, “stories, opinions, funny stuff, or combinations of all three.” This includes occasional columns for newspapers or magazines, but his proudest accomplishment is a Vietnam novel, Rising like the Tucson, written in the early 1990s. He has also published 10 books of cartoons.

Writing, however, does not allow for time to do other things, such as daily cartooning. A good book – as with a good drawing, funny or serious – also commands a staying power that political cartooning cannot necessarily equal. “Cartoons are for the immediate instance, which is fine, but I enjoy both forms. And I have great admiration for writers, particularly those who manage to mix the serious with the comic.” In the meantime, Danziger continues to produce. The challenge now, he maintains, is that “I have no idea what I will do when I grow up.”

For a further selection of cartoons, see below. You can access Jeff Danziger’s cartoons and other information links here. 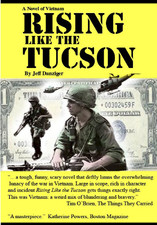 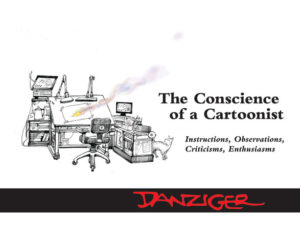 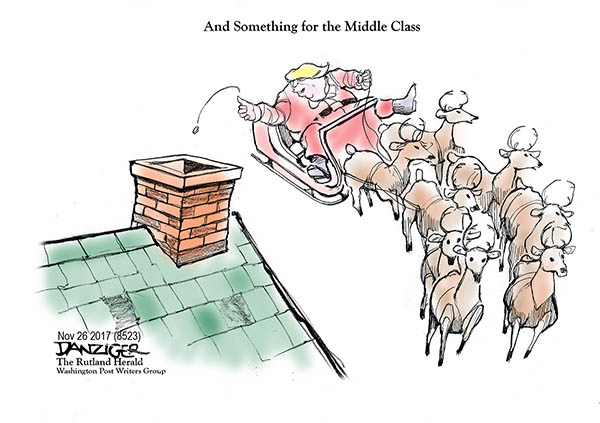