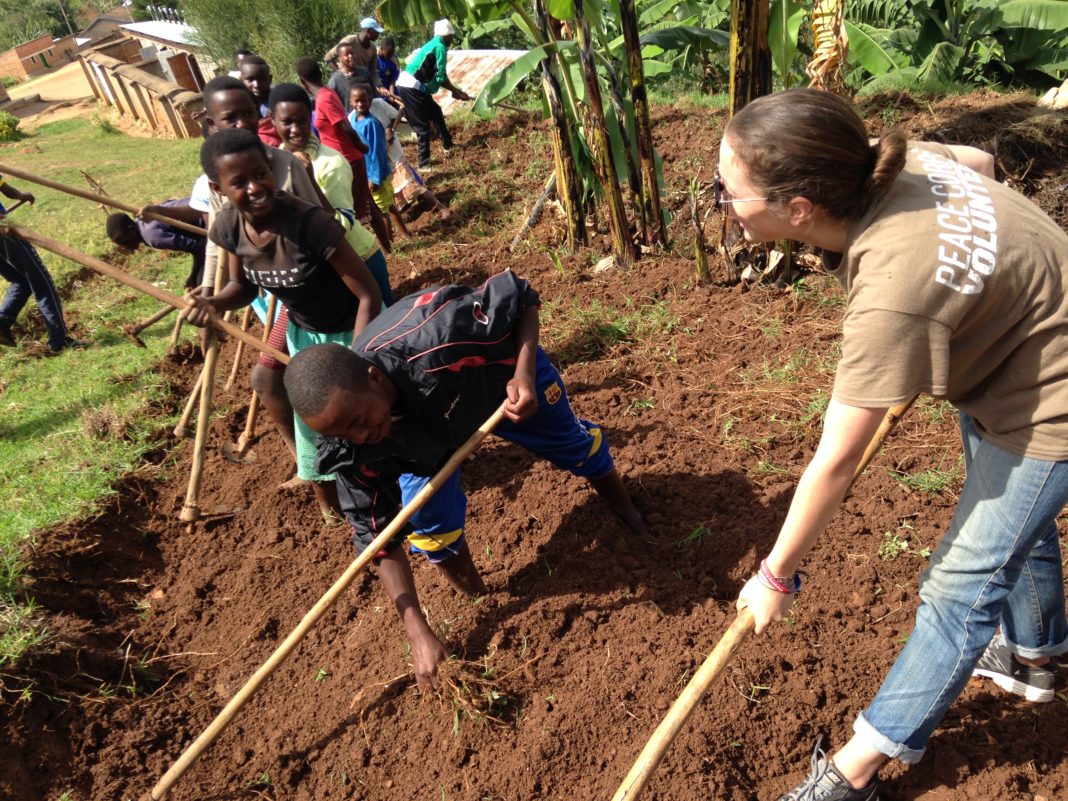 The following article is scheduled to be published in the November, 2018-January 2019 print/e-edition of Global Geneva magazine.

“Good morning, teacher,” faintly echoes. I squint my eyes against the piercing sunlight, searching for the source of the greeting. Clambering up the slope of another hill is the barely discernible figure of a young boy. A khaki uniform marks him as a primary student. His eagerness to practice his English, despite the distance between us, is endearing. I wave and continue the hour and a half trek from my village to the market town.

It’s the height of the dry season and the dust claims everything it encounters. To my left, skeletal fingers demark the boundary of the Murambi Genocide Memorial. Here, on April 21st, 1994, between 40,000-50,000 Tutsis and Hutu sympathizers were murdered. The perpetrators carried out the slaughter in over eight hours. The site is a haunting reminder of what this country has endured and what it is still overcoming.

My new home: a rural village

In September 2016, I arrived in Rwanda, now a country of 12 million people, with the Peace Corps. After 12 weeks of intensive professional, language, and cultural training, the Peace Corps placed me in a rural village in Rwanda’s Southern Province. This village has been my home for the past 20 months. Within my community, my primary responsibilities entail teaching English in a local Secondary School and facilitating teacher trainings. Other responsibilities and projects are self-assigned, developed in partnership with community members. Since arriving here, my learning curve has been as steep as the slopes of Rwanda’s innumerous hills, hence the expression “country of a thousand hills.”  (Editorial note: Rwanda’s leading genocide propaganda broadcaster was ironically called Radio Milles Collines).

It is no cliché to describe Rwanda as a country of contrasts. Rainy season, with its torrential downpours, abruptly shifts into merciless months of sun. Time wavers between languid and hurried: building sites that appear untouched for months are suddenly completed overnight. Nebulous space separates what is said and what is desired. Driving through the orderly and fashionable streets of Kigali, the hilly capital city, you would be surprised to discover that Rwanda ranks amongst the world’s twenty-five poorest countries.

Becoming a umunyarwandakazi: A Rwandan woman

The Peace Corps emphasizes integration. To help your community, you must know the people. And yet the threads that connect us feel tentative. Stark economic and educational divisions are hard to ignore. I have not experienced or inherited memories of the genocide. I do not know how to till earth or sow beans. Despite these differences, my presence here and willingness to learn seem to be enough; community members have chosen that I belong. Grandmothers smile at my broken Kinyarwanda. Looking at our interwoven hands, they respond: “Uri umunyarwandakazi (you are a Rwandan woman).” There is a humbling power in being claimed.

Confronting the nuances of poverty: from shrunken mud homes to the lack of shoes

As community members offer their stories, comfortable boundaries disappear. You are not securely removed from peoples’ hardship, debating the next capacity-building, gender equitable, environmentally conscious, sustainable, or poverty alleviating project in an air-conditioned office. Instead, torn clothes, cracked feet, and shrunken mud homes provide a daily reminder of poverty’s destructive and ominous presence.

Increasingly, poverty moves from the visual to the personal. It involves confronting a student who you haven’t seen at school in weeks about her absence. Her answer, she cannot come to school because she doesn’t have shoes or a family to provide money for shoes. Shoes are important here; people are judged by their shoes’ cleanliness. Sometimes you want to shut your eyes and cover your ears. Sometimes you long for distance.

Choosing to accept belonging compounds responsibility. You share in community members’ dreams and pursue hope. You share in their disappointments and feel powerless in comparison to the need.  Choosing to accept belonging likewise connects you to a network of engaged teachers, students, and community members who relentlessly fight for a better future.

When longing to distance yourself, you draw strength and inspiration from the friendships you have formed around you. I think of the director of the local health center, coming to her office during maternity leave to discuss malnutrition. Her personal sacrifice is one of countless examples. Knowing you are not alone in fighting school dropouts, food insecurity, malaria, or gender stereotypes, but rather a small link in a committed network allows for hope and perseverance.

I am perhaps naively optimistic that these ties will transcend time and space. I think of my student Clementine and her tenacious dream of running her own multinational business. I think of my fellow teacher Anne-Marie riding a bike through the village and subverting gender norms.  Her logical explanation, “If a bike can get me to my destination faster, why shouldn’t I ride one?”  I may be leaving, but while I still have the ability to connect community members with resources, I refuse to disengage. For once you have seen and belonged, what is the price of forgetting?

Raised in the Lake Geneva region, Ashling O’Donnell, now 25, is a British-American national who attended school both in France and Germany. She is a graduate of Connecticut College with a BA in International Relations and Religious Studies.

The Peace Corps is a US-government-funded voluntary agency, first launched by President John F. Kennedy in 1961, which now works in more than 60 countries. Open to US nationals, more than 220,000 Americans have served since in the Corps around the world in some 140 countries.

Other Breaking In stories in Global Geneva.