The following is Part I of two-article reportage by Italo-Swiss journalist Luisa Ballin on the Canton of Neuchâtel as part of Swiss Journeys, our regular Global Geneva series of discovery. (Also to be published in our Winter 2019/2020 print & e-edition)

In the 18th and 19th centuries, the Canton of Neuchâtel had the reputation for speaking the best French. Many foreigners came to learn what was then the language of diplomacy. In the courts of Europe, it was fashionable to hire a Swiss governess or tutor for the education of their children.

For Metin Arditi, a Turkish-Swiss novelist and author of the Dictionary of Love of Switzerland and Dictionary of the French Spirit (Editions Plon Grasset): “The accent is undoubtedly a little raspy, but it is in Neuchâtel that we speak the best French of Switzerland!” And according to Swiss linguist Andres Kristol, it was “from Geneva and Neuchâtel that people spoke the good French of Paris.” This was at a time, he wrote, when it was still ‘la France profonde’ (deep France) steeped in the ‘patois’ (local slang) of parochialism with 90 per cent illiteracy.”

Overlooking the languid banks of the Neuenburgersee, as the German-Swiss call Lake Neuchâtel, at the foot of the Jura mountains bordering three other cantons – Vaud, Fribourg and Bern – the city also seduced another well-known, universal Swiss, notably the author, dramatist and painter, Friedrich Dürrenmatt.

Born in the canton of Bern in 1921, he settled here in 1952 until his death in 1990. Renowned for epic dramas such as The Visit (Der Besuch der Alten Dame) and The Physicists (Die Physiker) as well as the novel, The Pledge (Das Versprechen), he lived in the verdant Vallon de l’Ermitage, with stunning views and an impressive library. His home was eventually integrated into a building designed by Ticino architect Mario Botta to become in 2000 the Centre Dürrenmatt Neuchâtel (CDN), a museum dedicated to the most read, translated and performed Swiss author in the world.

“The Centre Dürrenmatt Neuchâtel exhibits his paintings in connection with his literary works, but also offers a space for temporary exhibitions and events,” explains Madeleine Betschart, director of the CDN. The centre is designed to reflect the inexhaustible storytelling capabilities of the life and works of this exceptional creator. Writing in German, Dürrenmatt was also an avid supporter of the local football team, Neuchâtel-Xamax, whose matches he could watch from his window.

“In contrast to my literary works,” he noted, “my drawings are not part of any form of ancillary creation, but rather represent the battlefields with their lines and colours, where my struggles, my adventures, my experiences and my defeats as a writer occurred.” Not without a sense of humour, this scholarly and spiritual graffiti artist had also transformed his toilette into a joyful and highly suggestive Sistine Chapel.

Just below the Friedrich Dürrenmatt Centre, you can walk to the Botanical Garden. Part of the the University and City, it beckons to lose yourself in the heart of a relaxing and luxuriant natural retreat. This extraordinary garden boasts more than 4,000 species of plants, some of them exceptionally rare. The garden is also a focal point for exhibitions exploring the link between humanity and environment as well as cultural spectacles, workshops and parties.

You can continue strolling along the lake shore with its constantly changing azure, deep blue or emerald tones. One can also dream of those elegant Belle Epoque times, when people might wish to frequent Le Bain des Dames (Ladies’ Bath), offering a charming place to bask or dine on the terrace, enjoying perhaps a cheese fondue within its walls on a cold winter’s day.

Christine Domon, an erudite city guide, is another German-speaking citizen seduced by the charms of Neuchâtel. She accompanies me through the streets of a city, pointing out its surprises or eccentricities, or revealing its secrets.

We take a welcome break in front of the fountain located near the Passage des Bouchers (Butchers’ Lane), with a bottle of absinthe, a distilled, highly alcoholic elixir once dubbed the ‘Green Fairy’ by those addicted to its intoxicating effects. (See Global Geneva article by Janet Hill).

Originating in the Canton of Neuchâtel during the late 18th century, this anis-flavoured drink with hallucinogenic qualities and links to Bohemian culture, it was eventually banned in 1915. Diluted in water, it quenches one’s thirst; swallowed pure, it could lead to madness. Today, however, the Green Fairy has been rehabilitated. There is even an absinthe-based ice cream ‘parfait’ named after French President François Mitterrand, when he visited Switzerland. It is now served at the best tables. 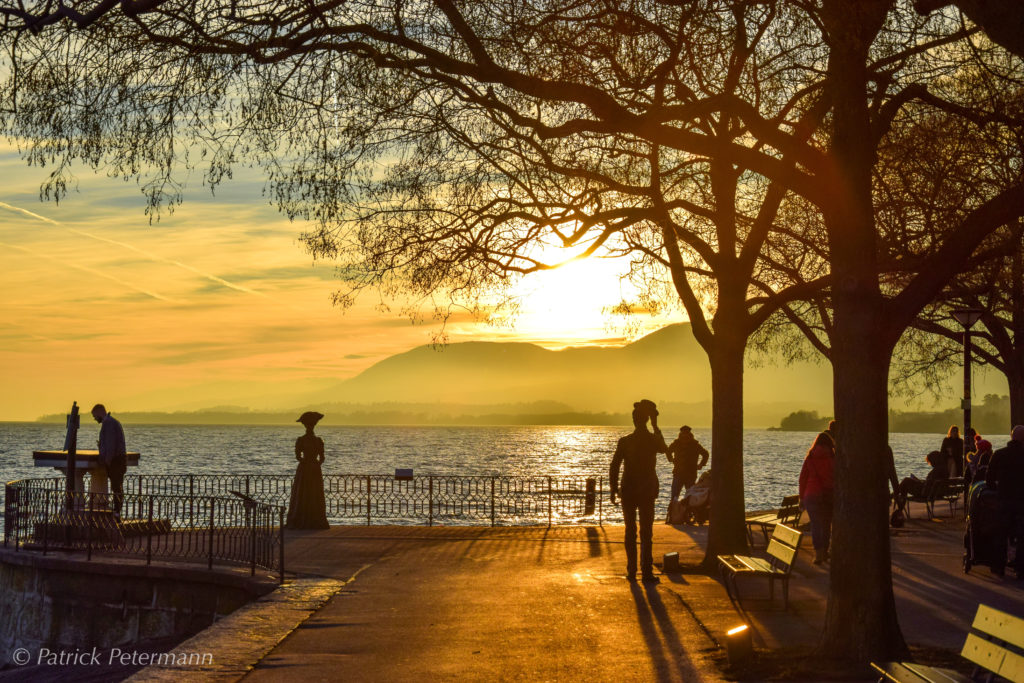 The City of Neuchâtel, which merged with the neighbouring towns of Peseux, Corcelles-Cormondrèche and Valangin in 2018, now has a population of 44,432. Not only rich in its bourgeois homes and distinguished traditions, it is famous for its wine.

The beautiful buildings and places of historic renown encourage architectural enthusiasts to climb up to the Collegiale and Castle to admire the city from above. The most nostalgic will push open the door to the imposing Hotel DuPeuyrou. This bears the name of its creator who liaised with Jean-Jacques Rousseau, whose first complete edition was published after the writeràs death in Geneva in 1788. This now serves as a restaurant with a terrace and garden.The most curiosity-driven will enjoy a journey on a turn-of-the-century tram, taking a Belle Epoque tour of Neuchâtel. Halting at various historic places you can taste its past as zou journey through this 1,000-year-old city with its opulent and fascinating cultural treasures. You can then stop at the lakeside Hotel Beaulac restaurant or the Brasserie Le Cardinal, with its Art Nouveau decor, for sustenance.

Later, perhaps, you can take tea at the Hotel Palafitte, a unique architectural structure built on stilts in 2002 for the Expo02 Swiss National Exhibition.  It features 38 individual pavilions, with a sober and refined decor, 24 of which are built on the lake itself with access via a ‘ladder’. The Palafitte also offers a striking external opening to an area where archaeologists found the remains of the earliest Swiss houses built on pilesI .

Pushing open a door in the Old Town, I entered  the domain of a merchant whose broad selection of fine wines includes a l’Œil-de-Perdrix (Partridge’s Eye), a Neuchâtel rosé, or a sparkling Mauler wine normally reserved for customers who come to taste and buy nectars. Here you can enjoy a musical intermezzo by the owner who improvises at the piano in his unusual shop.

Before leaving Neuchâtel, you should visit  the Flacon & Molécule, a specialized workshop that creates and sells scents born from the inspiration of masters of high perfumery. In her luminous den, Emmanuelle Grau Bretin, a young surgeon who converted to becoming an olfactory designer, offers exceptional fragrances based on individual personalities to find the perfume that harmonizes with each skin.

Luisa Ballin is an Italo-Swiss journalist and contributing editor to Global Geneva. This article was made with the support of Neuchâtel Tourism.

Part II of this Swiss Journey focuses on La Chaux-de-Fonds: a UNESCO-honoured watchmaking metropole. (To be published soon)

A Tale of Two COPs