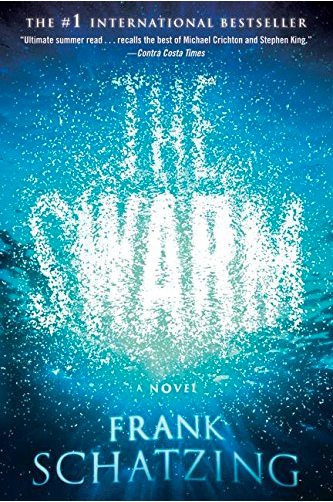 This is part of William Dowell’s Tom’s Paine column. A reminder: we make our content free worldwide. If you like what we do, please support us.

All of that sounds strikingly like the scenario presented by German Sci-Fi writer, Frank Schatzing, in his best-selling, 2004 novel, The Swarm. As with the current pandemic, Schatzing’s scenario begins with a series of not very noticeable, seemingly disconnected events, which gradually form a pattern threatening the human race itself.

The novel starts with the barely noticed death of a young native fisherman off the coast of Peru.  Diving underwater to retrieve an expensive fishing net that has inexplicably been sucked beneath the surface, he encounters an unusually large shoal of fish that block his escape to the surface.

The Peru incident is followed by a succession of events in which nature appears to be mounting a coordinated attack against all human beings. Call it revenge, or an attempt to reinstate a planetary balance. The results are just as deadly. It is almost as if nature is playing a deadly chess game in which it deploys an uncannily intelligent strategy.  No one takes the threat seriously at first, but that is because the initial comes from scientific experts whose domain is so specialized that hardly anyone else can understand what they are talking about. By the time governments grasp the dimensions of the threat is serious, it may be too late.

Looking at the perversity of the coronavirus, you could come to the conclusion that it is a perfectly disruptive biological weapon, that almost seems to be following an intelligent strategy intended specifically to take advantage of human vulnerabilities.

Coronavirus was predicted, but no action taken

That is impossible, of course. What is really happening is closer to Darwinian evolution. The pandemic is succeeding in propagating itself where other diseases have failed, simply because by trial and error of all possible combinations, this virus’ characteristics perfectly match humanity’s physical and psychological weakness.   A disease like Ebola is far more terrifying, but it is also so fierce that it burns itself out before it can spread very far. Coronavirus is more subtle.  It spreads rapidly through a population before anyone takes it seriously. This pandemic takes its time in killing people. As the last few weeks have shown, it ends by causing a great deal more death.

We were warned, but most governments dropped the ball when it came to preparations. Donald Trump not only disbanded the White House National Security Committee group that was supposed to plan for a global pandemic, he also cut funding to the Centers for Disease Control, which was in charge of sounding the alarm and providing a response. In hindsight, given the pressures on the planet from overpopulation, climate change and the fact that human consumption is now outstripping the planet’s resources, a cataclysm on the order of the current pandemic was inevitable.

A cataclysm was inevitable, but we hoped it would happen later

Modern capitalism no longer seriously considers anyone to be “his brother’s keeper.”  COVID-19 proves that that attitude is not only morally wrong, it also carries a heavy price.  When the end comes, it hits us all, whether we are wealthy or poor, and regardless of nationality or social standing.

It has been obvious for a long time that unsustainable consumption, waste and a callous disregard for the environment were bound to unleash a cataclysm sooner or later.  We just hoped that it would happen later.

H. G. Wells’s prophetic novel, War of the Worlds, describes an overwhelming attack against humans by aliens from outer space. In Wells’ optimistic ending, it is the common cold –a coronavirus—that ultimately saves humanity from its alien invasion.

Schatzing, on the other hand, ends his book on an ambivalent note. We don’t really know if humanity will make it or not.  You could chalk that up to a new sense of 21st Century realism. In the film of Nevil Shute’s dark, post-apocalyptic classic, On the Beach, the last scene ends with an upbeat banner waving in the wind.  The words on the banner read: “There is still time brother!” Unfortunately, no one was left alive to read it.  As it happens, we still do have time, but that time is not infinite.

Schatzing’s book is available in English on Amazon at https://www.amazon.com/Swarm-Novel-Frank-Schatzing/dp/0060859806.  It is also available as a free download at the Internet Archive at: https://archive.org/details/swarmnovel00scha

William Dowell is the Americas editor of Global Geneva based in Philadelphia. As foreign correspondent, author and broadcaster, he has worked across the globe for leading news organizations such as TIME and ABC News.