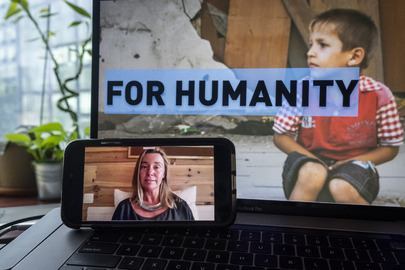 What is there good to say about the COVID-19 crisis? Dimitri de Vreeze, co-CEO of DSM, a big Dutch company producing health, nutrition products and materials, has one positive message for the planet from the devastation caused to economies and health systems: the sense of urgency much of the world brought to the problems.

“I have seen things happening that I thought would be impossible in such a short time: cooperation, collaboration, humankind reaching out to each other. But also making innovation work in two weeks which you would normally have planned for two years,” he declared in a webinar on 10 June.

“More sustainable companies were actually resilient and were not so badly affected by the crisis as other industries. Sectors like software providers and communication services did extremely well. And also companies active in medical equipment and nutrition. The past few weeks have provided proof of sustainable funds performing well, both in an upward as well as a downward market.”

But that wasn’t why they came together in the webinar organized by the ClimateAction coalition of business, governments and public bodies. They sat down in their separate online spaces to discuss how COVID-19 might change sustainable financing.

Ms Lindeman said the crisis highlighted even more that investment specialists need to question companies about social issues such as health and welfare treatment of their employees, or whether companies are focusing too much on creating shareholder value over what has become known as stakeholder value (including both the the community and staff).

So investment managers, in the period of shareholder meetings during the COVID crisis, have been asking firms whether their remuneration packages are justified, and whether a company should be declaring a dividend if it is receiving government subsidies.

“We have voted down several compensation and dividend proposals,” she reported.

The lesson she took from the experience was not just that investors’ perspectives have shifted to social questions but also “how we use our right as an active owner” of company shares.

Transport took a big hit when the lockdowns started, but post-COVID “it could very well be that there will be a higher request for smaller cars and electrical vehicles. We are preparing for that transition going forward,” he said.

DSM and its people around the world also took early steps to manage the COVID crisis.

“We have a large business is in China. Eleven per cent of DSM’s sales is to China,” he observes. “We have more than 5000 employees in China. They already were alerted in January.” The Chinese management proposed temperature checks for workers on coming into the factory, making mouth masks mandatory, and establishing separate entrance and exits, as well as instituting down time between shifts.

“That was in January. Could you imagine?” he said. “My first reaction was: isn’t that a bit overdone. But we followed the local experience and the local advice.”

“When COVID came into Europe we immediately applied all the learnings from China.”

COVID-19 also instituted “very intense cooperation between governments and the private sector,” de Vreeze observed. Such close partnerships “should be there to stay” post-COVID, he argued. “The problems are too complex to be solved by governments alone or private companies alone. We need to work together.”

But they both reported that because of the crisis, some governments and some companies are “pedalling back” on their environmental commitments.

“We should not allow that,” said de Vreeze. “The need to have a healthy sustainable planet, that isn’t something we can put on hold for 24 months.”

“DSM is calling to our joint companies to confirm that we stick to our net zero emission commitment by 2050. We stick to our science-based targets. Post-COVID that is even more important for us than pre-COVID.”

Steve Lippman, ESG (Environment, Social, Governance) Engagement Director for Microsoft, reported that his company announced a major environmental initiative in April though it was debated whether this was appropriate during the crisis: an AI for Earth programme to help researchers understand better how to sustainably protect ecosystems around the world.

In fact, “we got a really great reception and we are glad we did that.”

Microsoft has been carbon neutral since 2012, he reported. It also announced an initiative in January to go carbon negative by 2030 and “to eliminate all our historical emissions from electricity use dating back to when Microsoft was first founded in 1975 and to do that by 2050,” he added.

Answering a question, he said the offsetting would be through increased energy efficiency, renewable energy, high-quality offsets, and even nature-based solutions such as afforestation projects.

But greenification, such as moving to electrical vehicles from fossil fuels, will be a challenge, warned de Vreeze, because some electrical vehicle parts are difficult to recycle. Reducing our planetary footprint will require considerable innovation, he said.

Nevertheless, “we have moved 9000 of our employees in lockdown in Europe from office work to work-at-home via the [Microsoft] Teams setup,” he pointed out. “We could only do that because we were […] early adopters [in] going digital.”

DSM had found that in the crisis, because people were eating more at home, they switched from fish and beef to poultry because that took less time. “If you have to prepare it yourself, you take the shortcut,” he observed. Luckily, DSM is strong in the poultry business.

People also became concerned about increasing their protection from viruses. “If you take vitamin C and vitamin D, you do improve on immunity.”

Both these experiences have messages for the future. “We feel that post-COVID-19, this higher awareness [among consumers] is there to stay.”

De Vreeze made a strong call for “BuildBackBetter” efforts. Stimulus measures aimed at re-opening and re-starting the economy offer great potential to catalyse and accelerate the needed transitions (e.g., in energy, the circular economy, and sustainable farming), he points out.

The webinar: How is COVID-19 refocusing sustainable finance? (LINK)