“Essentially we are playing Russian roulette,” says Andrew Leigh. And the biggest threat is the political groundswell known as ‘populism’. “We need to move quickly to take that bullet out of the chamber,” argues Leigh, 49 and an Australian Member of Parliament for Canberra since 2010. (See Toby Ord and his comment.) Leigh’s primary concerns: “Pervasive short-term thinking leaves us unprepared for long-term risks,” and the rise of ‘populist’ politics “makes catastrophe more likely”.

“Populism, which has been on the rise across the advanced world, is causing us to think more short-term and distracting the world from long-term risks, some of which could spell the end of the species,” he declares.

So what are our long-term threats to survival as a species?

“Climate change, most obviously. But then also such things as pandemic risk, the risk of nuclear war, and even the risk of runaway artificial intelligence,” says Leigh. And not much discussed: bioterrorism.

“The catastrophic factor that wiped out the dinosaurs […] is now almost unthinkable for humanity.” A couple of asteroid-focused disaster films led the U.S. Congress to launch an asteroid tracking programme with another, still running for a couple of years more on how to deflect one from hitting Earth.

[On 24 November NASA launched a spacecraft to crash into an asteroid to see whether the asteroid will change course in a Double Asteroid Redirection Test (DART). The $330 million project is billed as the National Aeronautics and Space Administration’s first planetary defence mission.

The spacecraft will smash into the smaller member of the binary asteroid system 65803 Didymos (“twin” in Greek), discovered in 1996 while its 160m-wide minor-planet moon Dimorphus (“two forms”) was spotted in 2003. It is classified as a potentially harmful asteroid and near-Earth object.

Dimorphus, slightly larger than Egypt’s Grand Pyramid, is DART’s target. Its name ” represents how the form of Dimorphos’s orbit will change after the DART spacecraft impacts the moon,” according to NASA. Dimorphus was also the target of a cancelled robotic crash mission cancelled in 2016.

Didymos is said to be the most easily reachable asteroid of its size from Earth, requiring less velocity than to reach the moon. The new crash, at over 24,000 kmh, is due in October 2022 (LINK)].

Better prepared than in 2019

Another sliver of good news: pandemic preparedness: “We are doing much better than we were in 2019,” says Leigh, though he still judges the COVID programme a failure.

“The world wasn’t prepared for the worst pandemic since the Spanish flu,” the Parliamentarian told his EPFL interviewer. “We hadn’t put in place the systems that would have allowed us to contain the virus. The development of the vaccine, I think, went remarkably well all things considered. But the health care systems struggled. We could have done much better and we could have saved a lot more lives if we had thought more about existential risk.”

The main problem is that “existential risk has received short shrift in politics in general. Politics is often focused on the here and now,” says the lawyer and economics professor turned politician. “Because catastrophes are unlikely, the political system hadn’t bought enough insurance to guard against these improbable risks.”

So quite a few times, we came close to catastrophic events, such as nuclear launches by mischance  (1962 during the Cuban missile crisis), bio warfare (sarin used by a terrorist group in Japan), and climate change facing powerful deniers in a number of countries.

The threat of feedback loops

For the immediate future, Leigh points to climate change with its threat of feedback loops increasing global average temperatures, the number of nuclear weapons, pandemics, bioterrorists getting hold of scientific “gain of function” technologies that combine the infection rates of measles with the killing force of ebola, and even artificial intelligence that treats humans ethically on the level with pets.

On controlling climate change, “striking global agreements to reduce carbon emissions is absolutely vital. But one of the aspects of climate change that we don’t talk about often enough is that even modest reductions in carbon emissions now can have huge impact in reducing the probability of a really awful outcome[… from feedback loops, such as] a 75-ft increase in sea levels, which might seem far-fetched but these are levels the sea was at last time carbon concentrations were this high in the atmosphere.”

Governments must take the lead

What will have the most effect? Leigh is convinced it is up to governments. But “we can certainly all make choices that have an impact: using a little less energy, putting solar panels on the roof, switching to an electric vehicle.”

Nevertheless, he agrees, “to a large extent the changes are going to need to be driven by the governments. The incentives in place need to operate at a societal level. Those countries that have managed to decarbonize most rapidly, in general that hasn’t been because their citizens have individually made particular choices but because the governments have collectively made decisions that have decoupled carbon emissions from economic growth.”

As for the lack of government action, exemplified at the Glasgow summit just ended, interest group politics by business (in the U.S. vs the U.K.) have played a part. “Weaponized” opposition to action in the European parliament and extremists (in Brazil and the U.S.) have also played their part, Leigh concludes.

Climate change deniers reject the views of experts, and this dovetails into ‘populist’ thinking. “Populists are often looking around for elites to demonize, and climate scientists have often been chosen as one of those elite groups that have been attacked,” he observes.

But feedback loops, intensifying the effects of global warming, means Earth’s average surface temperatures could increase not just by the projected two degrees but “in a small probability to four, five or six degrees,” Leigh points out.

“At that stage, all bets are off and the impact on the planet really is catastrophic.”

‘Populists’, who see politics as a “conflict between a pure mass and a vile elite,” Leigh observes, “tend to distract us from what is going on in the future. If you are in a bar fight it is very unlikely you are going to be thinking about your retirement fund. And populist politics can often leave us feeling we are in a constant political bar fight.”

Leigh confessed on New Books Network: “Ironically it took a global pandemic for me to think about the long term.”

So EPFL’s moderator Galina Limorenko asked him about how he judged the differences between politics and academia.

From cute ideas to playing a team sport

“Politics is much more of a team sport,” Leigh told the neuroscience doctoral candidate. “It tests your powers of persuasion much more than economics. There’s also less of a premium placed on cute, quirky or unusual ideas. Increased emphasis on the need to build on long-term relationships. The best thing you can do for a colleague in an economics seminar is to paint out the fatal flaw and tell them how to fix it.” In a political meeting “it’s not always greeted with the same warm response.”

Since going into politics, Leigh has written “a book every year or two” on topics such as randomized trials, social capital, inequality, luck in politics, and innovation.

Would he recommend young people to consider a career in politics, she asked.

“Absolutely,” Leigh replied. “It is the most diverse and interesting job I have ever done.” That week he had met with colleagues in policy, Afghans and Hindus from Bangladesh as well as local businesses about getting back on their feet.

But he noted that politicians spend “a remarkably low amount of time” thinking about the long term.

House fires, mobile phones and the child in a car on a cliff

His comparison was the difference between insuring our houses against fire and mobile phones against loss. “We take insurance for our houses but not for losing our mobile phones. Yet much of what we are doing in politics seems to be focused on problems on the level of ‘will my mobile phone get lost’ compared to ‘will my house get burned down’.”

As it is, he is concerned that future generations, if we survive, will look on us like “a child playing with the parking brake of a car parked on a cliff’s edge”.

But Leigh described himself as an optimist about us being able to deliver “lives of unimaginable pleasure” to future generations if we take action now.

So Galina asked him to name his favourite catastrophe movie. His response was immediate: Armageddon with Bruce Willis. “But there’s a lot of good pandemic movies out there and disaster flicks.” 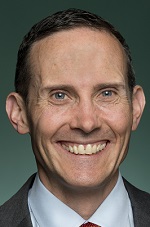