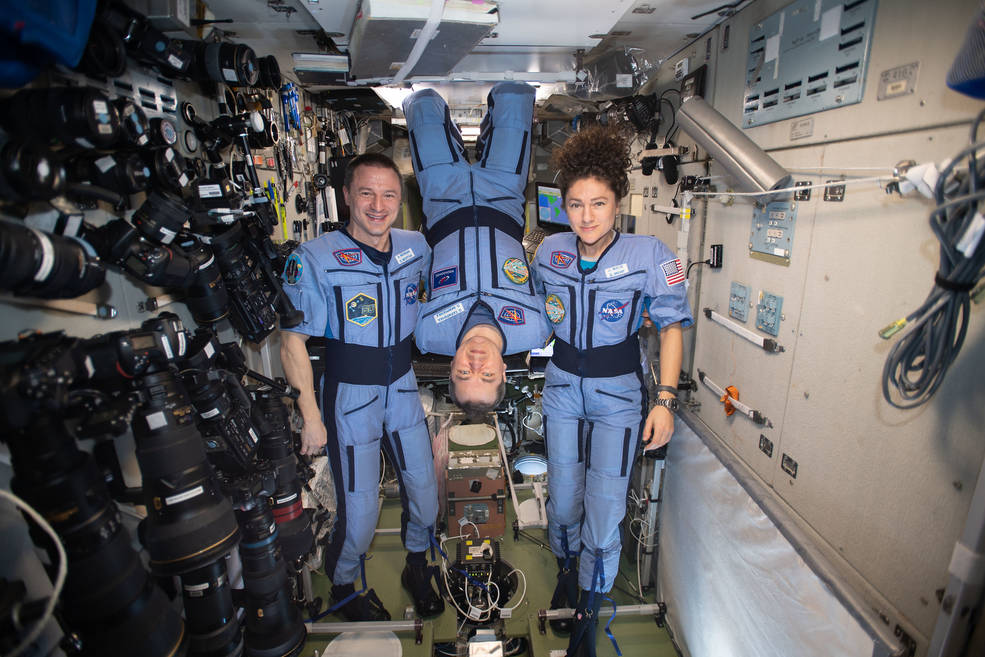 A reminder: we make our content free worldwide. But we cannot exist without your support.

The astronauts have posted photographs of earth from space and messages reminding followers that earth ‘remains a pretty spectacular place’ and to stay strong during the Covid-19 crisis. And like many others, they have used social media to show how to live happily in isolation. (See Jessica Meir’s Twitter feed)

Three of the six astronauts and cosmonauts from the spacecraft arrived back on earth Friday 16 April, 2020. And even with the terrestrial lockdown rules that they are now experiencing, NASA astronauts Jessica Meir and Andrew Morgan and Russian cosmonaut Oleg Skripochka have been dazzled by their return to earth.

When the space travellers were extracted from their Soyuz spacecraft on the Kazakh steppes, they couldn’t hug their welcoming colleagues, who wore facemask and protective gloves. ‘You probably can’t recognise anyone of us under these masks’, they were told as they were carried to recovery chairs and handed much needed energy drinks.

But the three were smiling and able to smell the spring flowers, feel the breeze and breathe in fresh air for the first time since they left earth in September 2019.  Another treat, only available on earth, happened later; a real shower. Astronaut Jessica Meir had tweeted from orbit, “daydreaming about what it’ll feel like to be immersed in water again”.

Nothing new about social distancing for astronauts

Social distancing is now part of our lives, but in space the concept of distance takes on a more profound meaning.  Events on our blue planet have sometimes meant that distance could alter time. And on one mission in 1991, cosmonaut Sergei Krikalev discovered a real life variation of the time-space continuum beloved of science fiction writers.

In May 1991 Flight Engineer Krikalev arrived onboard the Soviet space station Mir –meaning Peace—for a flight originally planned to be just a few months long. But in August 1991, a failed coup against Mikhail Gorbachev in Moscow changed everything.  The subsequent political turmoil and economic chaos resulted in a call to space station Mir informing Krikalev that there was no money to bring him back to earth for a while. And no other flight engineer was available to replace him, Krikalev was to keep Mir ticking over.

Krikalev continued his life in zero gravity and maintaining the station over the next few months, not that he had much choice. On December 26, 1991, still unable to get a confirmed date for a return flight to earth, he listened as news reports detailed the dissolution of the Soviet Union.

When Krikalev was finally able to return from space after ten months in March 1992, he had not only set a new endurance space record but he returned to an entirely new country.  His space craft landed not in the USSR but the newly independent Republic of Kazakhstan. Even Krikalev’s hometown Leningrad was now known as St. Petersburg.

But the expertise Sergei Krikalev had gained in isolation served him well and he was invited to fly the first joint US/Russian mission in the Space Shuttle. The eight day mission with the American crew must have seemed a mere blink for him.

Krikalev’s space career continued to flourish with a total of six space missions, which included being part of the first crew boarding the International Space Station in 2000. He was later for head of the Yuri Gagarin Cosmonaut Training Centre. Sergei Krikalev clearly thrived in isolation and embraced the unexpected and the jeopardy, a role model for our times.

All space travellers appreciate risk. Launch and re-entry accidents have claimed the lives of eighteen cosmonauts and astronauts. Even onboard the International Space Station, which has been continually inhabited since 2000, certain dangers are accepted as part of the job. These hazards include being regularly subjected to radiation from solar flares, a continual possibility that an asteroid could damage the spacecraft and the physiological damage from weightlessness.

For starters that includes muscle atrophy, reduced bone density and increased cranial pressure which can damage eyesight. Despite the two hours of daily exercise the astronauts take on the specially adapted gym machines on International Space Station, it still takes months to re-adjust to earth gravity and regain normal strength after the usual six month mission.

Possible lessons for treating health issues back on earth…

As its name indicates, the ISS is an international spacecraft with contributions from fifteen countries and built by five space agencies; NASA (United States), Roscosmos (Russia), ESA (European Space Agency), JAXA (Japan) and CSA (Canada). The crews are drawn from dozens of countries with space programmes. The main role of the astronauts is to undertake a wide variety research and experiments.

Some of the research has medical applications. Software called AMOS (Autonomous Medical Officer Support Software Demonstration) is being developed to allow astronauts to diagnose and treat health issues on a deep space mission without help from earth-based doctors during long-duration missions to the moon, and in the longer term, Mars. But it also can be used on earth in remote areas of by helping isolated communities undertake complicated medical procedures. It won’t be ready in time for the Covid-19 pandemic, but AMOS could be a lifesaver in the future.

But in the past few months, the astronauts onboard the ISS were able to witness the effects of Covid-19 which are apparent even from space.

They observed a changed planet earth since January as they orbited the earth every 92 minutes.  In each orbit they witnessed sixteen sunrises and sunsets. And at all hours, the decreases in human activity were dramatic. As industry, transportation and business have slowed in successive parts of the world, so has the levels of pollutants.

Already in 1963: An awareness of the need to safeguard earth, not destroy it

Might there be positive outcomes inspired partly by the dramatic images beamed back from spacecraft orbiting high above us?  The words of the first human to gaze upon earth from space, Yuri Gagarin in 1963, should be remembered, “I marvelled at the beauty of our planet. We must safeguard and enhance this beauty, not destroy it.”

Three more astronauts – designated as Expedition 63– Chris Cassiday from Nasa and Anatoly Ivanishin and Ivan Vagner from Roscosmos –arrived at the ISS on April 9th .  Before they launched from Kazakhstan, they spent weeks in isolation, a normal procedure at all times, to ensure they don’t carry any contagious disease.

So a community of Covid-19 free humans will continue orbiting 400 kilometres/230 miles above us. And their tweets will be cheering on us earth-bound humans.

London-based contributing editor Tira Shubart is a freelance journalist and television producer. She is also a science writer, an Ambassador of the London Science Museum and Acting Chair of the Rory Peck Trust. See www.rorypecktrust.org