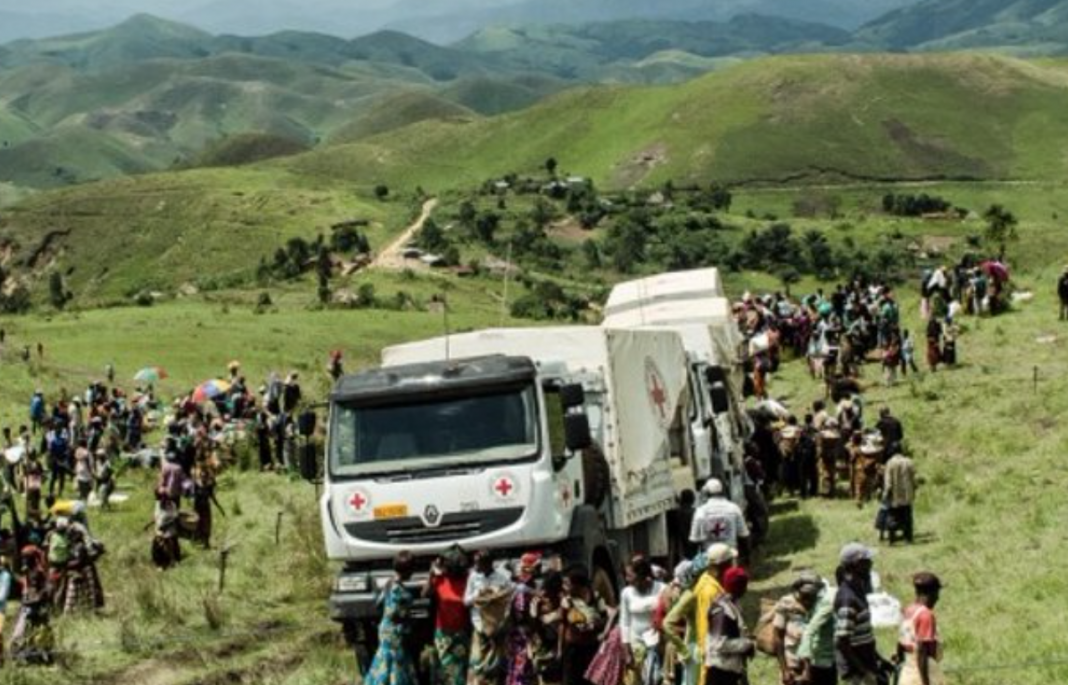 The following article by award-winning documentary film-maker Callum Macrae is part of the project: “No Fire Zone – In the Killing Fields of Sri Lanka” funded by the Pulitzer Center on Crisis Reporting. As the Pulitzer Center points out, while the world looked away as many as 70 thousand civilians lost their lives, most at the hands of government shelling. This is the story of the final bloody weeks of the Sri Lankan civil war.

The timetable may be slipping, but still Sri Lanka’s new government has been hailed for arresting the country’s rapid descent into the quagmire of corruption, repression and Sinhala ethnic triumphalism that characterized the preceding regime of former president Mahinda Rajapaksa. Under the new President, Maithripala Sirisena, there have been significant moves towards restoring the rule of law, freedom of the press and ending nepotism and corruption. There has also been a significant shift away from Rajapaksa’s mercenary accommodation with China to a pivot back toward India and the West.

But there is a problem, and that problem is the terrible legacy of Sri Lanka’s 26-year-long civil war – specifically about what to do with the reality that no one has faced any sanction for the fact that just six years ago, government forces massacred tens of thousands of Tamil civilians who they had told to gather, ostensibly for their own safety, in a series of grotesquely misnamed “No Fire Zones.” The separatist forces of the Tamil Tigers committed war crimes too and were even guilty of turning their guns on their own Tamil civilians who attempted to escape the shelling of these zones.

On the need for truth, justice, and an end to impunity and bold political solutions to the long-standing injustices suffered by the Tamils, the new government has shown precious little genuine progress. As it became ever clearer to the international community that the Rajapaksa regime was neither willing nor capable of investigating these crimes, the United Nations Human Rights Council (UNHRC) adopted a resolution proposed by the United States to set up an international inquiry on Sri Lanka (OISL).

The report was due for presentation to the Council this month, but it has been delayed after the dramatic ousting of Rajapaksa. The Sirisena government presented that decision as a consequence of its request for a delay, while the new High Commissioner for Human Rights, Prince Zeid bin Ra’ad, held it out as presenting an opportunity with new access to Sri Lanka to do more work and strengthen the report.

But in the Tamil heartlands of the North and East, it was seen as a betrayal and has contributed to growing strains within the main Tamil political grouping known as the Tamil National Alliance (TNA). They fear that if the international community takes its eye off the ball, there is little chance of any progress towards peace and justice.

Indeed there have been siren voices from many in the West arguing that this is a time to take the pressure off the new government and “show strategic patience as the new government attempts to implement changes.” One former influential U.S. Ambassador to Sri Lanka, Teresita Schaffer, openly argued that the United States should “lower its voice” on human rights, and that the UN Human Rights Council investigation should be suspended “while the new team gets its balance.”

There are concerns that the U.S.’s formerly single-voiced commitment to justice in Sri Lanka may be foundering on the rocks of its geostrategic interests. Put bluntly, key opinion-formers concerned with U.S. military and economic interests – who formerly went along with the Human Rights arguments because they were useful weapons with which to criticize the China-leaning Rajapaksa regime – may suddenly lose interest (or at best “lower their voice”) on human rights now that Sri Lanka has a more westward leaning government. This is particularly true in the form of Sirisena’s new Prime Minister, Ranil Wickremesinghe.

Driving the pillars of the Sirisena-Wickremesinghe government are three noteworthy dynamics. The first is the rapprochement with India and the West, which offers myriad potential advantages for the new government both financially and politically. These carrots could be used to pressurize the government into significant steps towards a process of justice and bold political solutions to the injustices faced by the Tamils. But current signs suggest the carrots are being squandered, Burma-style, with no quid pro quo demanded.

Next in line is Sirisena’s political dependence on a Sinhala vote that is largely driven by the same Sinhala-Buddhist chauvinism, ultra-nationalism and profound ignorance of Tamil sufferings at the end of the war – not unlike the case of Rajapaksa’s supporters. The third dynamic is the unsettling reality that key members of the new government and its military are themselves largely implicated in command responsibility for the massacres and war crimes. Sirisena himself, as acting deputy defense minister, was in charge of conducting the war during some of the most significant days in its final, most bloody stages.

If these latter two dynamics overwhelm the first – and that is the likely consequence of the international community taking the pressure off – then the Sirisena government will be no more willing, or able, to confront the central issues of war crimes, impunity and justice than the Rajapaksa regime.

So what happens over the next few months is critical.

One important principle ran through the decision by the Human Rights Council to launch the independent inquiry, one most clearly expressed in the UN’s unanimous adoption of the “Responsibility to Protect.” Paraphrased, it says, “It is the responsibility of the state to act if a group of its people are being subjected to war crimes, crimes against humanity, ethnic cleansing or genocide.” If the state fails to prevent or punish those crimes (or in fact stands accused of bearing responsibility for them), the international community has a responsibility to intervene.

It was in line with that principle – and despairing of the Rajapaksa regime – that the UNHRC voted to set up the international inquiry. Unless the new Sirisena government can prove it is now capable of mounting a credible domestic investigation and prosecution, nothing has changed. And in September the Human Rights Council should move straight to the process of establishing an internationally-mediated process to prosecute the accused.

That is what should happen. It doesn’t mean it will.

Colombo will certainly bluff and bluster, as ever, about its vague intentions of acting. In September it might even propose a resolution that could, in effect, say: “Thank you for that inquiry report. We are shocked too. Now hand it to us and we will deal with it.” Then it would likely follow the time-honored Sri Lankan practice of setting up a Commission that will do nothing.

How can the future avoid this travesty of justice? Members of the Council must be clear that the Sri Lankan government only has six months to demonstrate that in practice circumstances have genuinely changed since the Rajapaksa regime – and that means bold and urgent steps.

At the very least, the government should sign up to the Rome Statute, and thus the International Criminal Court (ICC). This poses no threat to the state’s sovereignty. Like the UN itself, the ICC only intervenes if a state fails to deal with crimes like ethnic cleansing, crimes against humanity, and genocide. If the new government is serious about dealing with these issues, it has nothing to fear from signing up for the ICC. On the other hand, if it the government does not sign up, it leaves itself subject to the suspicion that it has no intention of dealing with these issues, or even worse, ensuring such crimes are not committed in the future.

This does not mean the ICC is necessarily the solution. It does not act retroactively to deal with crimes committed before a state signs up unless either the country itself agrees, or the Security Council passes a resolution to this effect, and that would almost certainly be vetoed by China or Russia.

Other steps demanded of the government should include publication of the lists of prisoners it holds (possibly in the thousands), and information on their release or trial. It should include an invitation to the OISL investigators, and the UN’s special rapporteurs, to come to Sri Lanka and do their work unencumbered. It should include the demilitarization of the North and East, an end to the climate of sexual violence, and significant progress on the return of seized Tamil lands. A guarantee that new laws supposedly protecting witnesses are actually enforced should also be present. It should mean an end to intimidation of people exercising their legal right to demonstrate.

The Sri Lankan penal code should also include the international statutes that forbid crimes against humanity, war crimes, ethnic cleansing and genocide. Sri Lanka cannot expect the world to accept it will seriously investigate these crimes when it does not recognize them in its penal code.

Without these steps, the Human Rights Council should conclude that this government, like the last, is in no position to ensure a credible domestic judicial process that would enjoy the trust and respect of all of Sri Lanka’s communities.

If the ICC is ruled out, either by a Sri Lankan refusal to refer itself voluntarily, or a Russian or Chinese veto, then the Council must create an alternative.

And one option with a chance of acceptability by the majority of countries on the Human Rights Council – in particular those from the Global South who are understandably anxious to avoid what could be perceived as too “western” a mechanism – would appear to be a special court on the lines of the Sierra Leone Court. As a “hybrid” court, its location would be Sri Lanka with domestic input, but it would be an international court in every other sense.

The UN would appoint two-thirds of the judges and prosecutors, and the Sri Lankan government would appoint one-third. Anything less than a two-thirds international weight would be unacceptable and create mistrust among the Tamil community. Also essential would be the appointment of international judges and prosecutors by the UN, but not by elements chosen or favored by the Sri Lankan government. Sri Lanka has a record of incorporating an allegedly “international” element into its so-called inquiries to give them credibility, only to have that ploy subsequently discredited. Given its failure to stop the massacres in the first place, the world owes it to Sri Lanka to not fail its people again.

Pulitzer Center grantee Callum Macrae has been making films for 20 years in the UK and around the world, including Iraq, Japan (in the immediate aftermath of the earthquake), Haiti and several in Africa – covering wars and conflicts in Ivory Coast, Uganda and Mali.

His films have ranged from observational documentaries to history documentaries, to current affairs investigations – some polemical, some light-hearted, but usually with a focus on the unheard and disenfranchised.

He’s a BAFTA nominee and has won a large number of awards including two Royal Television Society awards, two One World awards, an Indie award, an Amnesty award and the Columbia DuPont Broadcast journalism award.