It may be no surprise if the 150th anniversary of the Prussian army’s descent on Paris with the largest siege force ever assembled draws few headlines. The seeds of woe it planted — a first world war leading inexorably to a second, even in some part the Russian Revolution – have understandably left a deeper impression on the world’s consciousness than their source. Yet The Capital of Civilisation, while a novel, holds to the historical facts of events that are telling enough of themselves to warrant reflection in 2020. Read on:

At sun up on 15 September 1870, the townsfolk of little Neuilly-sur-Marne on the wooded eastern outskirts of Paris awake to a strange sound. An intermittent patter, growing louder into a steady crunch. Those who open their shutters this glorious Indian summer morning spy figures in dark uniform moving cautiously down the cobbled main street, bayonets faintly glinting in the first shafts of sunlight, eyes shifting from side to side beneath spiked helmets. Then comes a larger company in loose formation, more confident and purposeful of step. Behind them rumbles a gun carriage bearing a stubby cannon escorted by a pair of jangling Uhlan cavalrymen.

Early risers run to bolt their doors in shock.

The Marne riverside community is the first of the French capital’s outlying townships to witness the `barbarians’ come marching through. The shock for its inhabitants is in the timing. The invaders are descending upon Paris at ungodly speed. Only yesterday the town elders began leaving to seek shelter within the walls of the capital a few kilometres distant.

In the long summer weeks of 1870 before the Prussian advance guard moves through Neuilly-sur-Marne, France’s proud imperial army is camped on the French border in the east, Emperor Napoleon III mounted on horseback at its head. Imperial France considers herself a military match for any power on earth. The army is raring to drive across the Rhine to humble a bumptious Prussia. `To Berlin!’ rises the roar from Paris cafes. National ganders are up on both sides of the Rhine. The French are fighting to uphold their supremacy on the continent and, they like to believe, to defend European civilisation. The Prussians are fighting for a just God, for long-burning revenge against the monstrous bullying of an earlier Napoleon and, less wittingly in the mind of the Prussian soldiery, to advance an immense project that Otto von Bismarck, their prime minister, has made it his life’s ambition to accomplish.

For the French, things soon go disastrously wrong. After a promising start to hostilities, French arms suddenly collapse. On 2 September 1870 Napoleon’s army is crushed at Sedan on the edge of the Ardennes, its survivors taken prisoner to a man. To crown the humiliation, Napoleon, the nephew of the greatest conqueror since Julius Caesar, is among the captives.

For Paris, all this is unthinkable. Enraged and indignant, Napoleon’s political opponents in Paris dethrone him in his absence and declare France a republic. Now it’s the turn of the Berlin cafes to roar. Nach Paris!

The invasion force that descends on Paris is 400,000-strong when fully assembled, its Prussian core joined for the first time by troops from sovereign south German states – Bavaria, Wurttemberg, Baden, Saxony too. Bismarck has devised this war, set it up, inveigled Napoleon into declaring it. Bismarck’s calculation is that Prussia must defeat France for his grand scheme of unifying all Germany to succeed. Undefeated, France will surely re-exert its old sway over the south Germans, rendering unification unattainable.

Defeating France, however, requires more than crushing Napoleon’s army in the field, it means taking Paris. Taking the City of Light. The greatest city on earth. The capital embellished anew of late by Baron Haussmann, Napoleon III’s prodigious city planner. Paris is France – the heart, brain, pride, culture, centre of all things French. From Henry V of England to the monarchs of Europe who brought down Napoleon Bonaparte, opponents of France have grasped the supreme psychological importance of entering Paris as victors.

This time, Paris is destined to suffer worse than ever it has in the past. Rather than launch a risky direct assault on the walled city, Marshal Helmuth von Moltke, the Prussian army commander, resolves to starve its two-million citizens into capitulating by laying siege. Paris is suddenly cut off from the world, telegraph lines severed, all fresh food supplies halted down to the last carrot. But the people of Paris – its prominent bourgeois ranks, its industrious proletariat, its Red revolutionary contingent galvanised by the emperor’s fall – join in patriotic resistance to fend the invaders off.

The population is convinced that Paris has half a million men at arms for the task, no matter that its cautious military command considers most of them unusable in combat. It is sheer madness, in the view of General Louis Trochu, the military governor, to think of throwing the ragtag National Guard recruits who constitute the bulk of the forces at his disposal – workshop hands, waiters, bakers, grooms, apprentices – into battle against hardened Prussian troops.

To keep spirits high the new republican government announces that the capital has enough food in store to last two months …..

….. Three months into the standoff between Parisians and their besiegers, amid the coldest winter in memory with the mercury plunging at times to minus fifteen centigrade, public transport bumps to a halt as the horses that draw omnibuses and fiacres move from the streets onto the hungering people’s table, along with stray dogs, cats, elephants and all the meaty jungle creatures from the Paris zoo. Attempted military breakouts, culminating in a brave mass sortie across the Marne, have a famished Paris holding its breath as barely trained guardsmen are sent into battle despite General Trochu’s deep misgivings. But against Moltke’s siege lines all French offensives come to nothing, and at heavy cost in lives.

…. Four months into the siege, as sewer rats join the menu, the capital is subjected to day-and-night shelling by giant cannon which Moltke advances from his siege lines, a move to which he finally resorts at Bismarck’s impatient demand.

…. Halfway into a fifth month of siege, Paris sues for an armistice, having braved the bombardment but forced now to accept that resistance cannot go on. The public larder is altogether bare.

By this time Bismarck, desperate to achieve his goal, has decided to pre-empt an armistice and act as though Paris has already surrendered. By this means he is able to declare Germany unified — the German Empire, with King Wilhelm of Prussia its Emperor and he, Bismarck, its Chancellor. To rub salt into French wounds the ceremony is held in the Hall of Mirrors at Versailles built to the glory of the Sun King Louis XIV, who took German lands across the Rhine into his realm. First among the tributes of war, the new German Empire annexes France’s prospering eastern provinces of Alsace and Lorraine.

In Paris, emerging in resentful chaos from the siege, elections for a new city government produce a people’s Commune modelled on the one that ruled during the French Revolution of 1789, with Reds in the ascendancy. The new Commune governs the capital in radical reforming style for over two heady months until it is brutally crushed by the superior forces of a national government elected, with Bismarck’s parting encouragement, from across all France.

In this furious civil-war struggle Communards are massacred; upwards of 25,000 Parisians, men and women, are killed or executed by fellow Frenchmen, and some of the finest monuments in the capital of civilisation including the magnificent medieval Hotel de Ville and the Tuileries Palace go up in flames.

The consequences? Victor Hugo, the god of French letters who lives through them, vows that France will never rest until she has had her revenge — and Bismarck himself allows in so many words that the author of Les Misérables will inevitably be proven right. Whence the stirrings of World War One and so of the ensuing World War Two. An admiring Lenin, for his part, avows when imposing Communist rule on Russia to drawing inspiration from the ill-fated Commune, in particular from what it taught him to avoid. 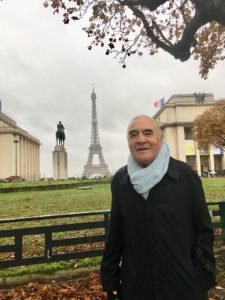 David Lawday, a Londoner, graduate of Oxford, former correspondent of The Economist in Paris, Washington DC and Berlin, is also the author of ‘Napoleon’s Master: A life of Prince Talleyrand’ and of ‘Danton: The Giant of the French Revolution’, both of which are published in English and in French. He lives in Paris. Lawday is currently putting the final touches to his novel on the Siege of Paris.

The Franco-Prussian war played an important part in affirming Switzerland’s national and cultural identify as a humanitarian state. The French Army of the East, nicknamed the Bourbaki Army after its disgraced general, sought military asylum in Switzerland. Wikipedia reports:

“From 1 to 3 February 1871 87,000 men crossed the Franco-Swiss border at Les Verrières (Neuchatel Jura) and were interned for six weeks.” This was equivalent to 3% of the Swiss population, themselves facing hunger and cold .”The internees were distributed to 190 localities in all cantons except the Ticino, because it was not reasonable to send the internees over the snow-covered Gotthard.”

The civilian population “contributed substantially to the aid and housing of the soldiers. Most of them did not only need medical treatment but also new clothes and shoes. Some hundred of them were too weak to survive the ordeal and were buried on Swiss ground.” A panorama in Lucerne by Edouard Castres (1881), 112m x 10m, depicts the army crossing and commemorates the Swiss humanitarian action.

France eventually paid Switzerland 12.1m francs for its public expenditure. Problems with the mobilization of cantonal troops during the operation led to the centralization of the Swiss army in 1874. The memory of that traumatic time lives on in Swiss culture. In Switzerland today, a sloppy soldier is still said to be a member of the Bourbaki army.