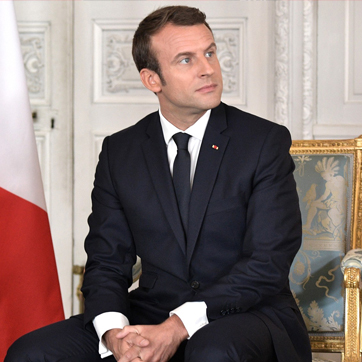 A tweet from Madelaine Albright caught the irony: “It has been too long since a President delivered a speech in Washington about the need to defend democracy and support international cooperation.”

Macron banged away at his central theme, linking the Iran deal, Syria, trade, desperate people on the move, and all the rest. “Isolationism, withdrawal and nationalism” prevent common answers to global threats, he said. Without updated alliances the vital institutions America built – the U.N. and NATO – could collapse. Authoritarians would quickly fill the vacuum. “Your role was decisive in creating and safeguarding the free world,” he added, “The United States…invented this multilateralism. You are the one who has to help to preserve and reinvent it.”

Macron’s zinger – “There is no Planet B” – brought all but partisan diehards to their feet:

“Some people think that securing current industries and their jobs is more urgent than transforming our economies to meet the challenge of global change. But we must find a transition to a low-carbon economy. What is the meaning of our life, really, if we work and live destroying the planet, while sacrificing the future of our children?”

If Americans were not too caught up in their own theater of the absurd to take in Macron’s message, and if the French weren’t so tied up in knots of their own making, I’d have uncorked a bottle of Côte Rôtie and gone to bed happy. Instead, I communed with my best non-breaking news source, Emiliano the aged olive tree, who is struggling to recover from the weirdest winter in memory: biblical rains and a hard freeze after prolonged deadly drought.

Up in Paris, a houseboat just hit something sharp on the Seine’s bottom. The river is suddenly disastrously low, after months of freak flooding that peaked at 12 feet above normal.  Any farmer knows the gravity of such unpredictable extremes.

But Trump is immovable. He excluded Democrats from Macron’s White House visit. At a press scrum he called on a Fox News stooge to pitch a puffball so he could yell at congressmen who dared to question his dubious top-level staff appointments. Nonstop cable babble, meantime, focused on which particular women Trump had boinked, overlooking the fact that he is screwing an entire planet. Climate and food security are only part of it. Look, for instance, at Macron’s home ground.

I flew back early, just missing yet another strike that has already cost Air France nearly $500 million. Then I drove down; featherbedded train crews are snarling traffic at least until June, throwing the economy – and daily life – into a spin.

Macron, a 40-year-old financial rock star who rode in on a landslide last May, dropped to Trump popularity levels in the fall, and is now just under 50 percent. Detractors say that, like Trump, he wants to curb workers’ rights to reward the rich.

This matters to us all. France is among the last brand-name nations that temper their capitalism with “social contracts.” Employees expect to be regarded as more than widgets and raw material on companies’ books. Nicolas Sarkozy led France to the right, but voters dumped him as too high-handed and not presidential. He now faces trial for corruption and influence peddling linked to his campaign. Francois Hollande tried to soak the poor but then reversed himself.

The balance is precarious. France is indulgent with crippling strikes, but patience is growing thin. Students are protesting education reform, with stricter entry exams, and leftist leaders threaten a reprise of those 1968 battles in Paris streets.

And this comes back to America. French universities are free, and so is health care. The socialist gulag Republicans sneer at could be a model state if extremes on both sides found common ground. But a transatlantic tug to the right inflames the left.

Macron went to Washington on behalf of the European Union. Trump snubs Angela Merkel, weakened at home because she took in so many of the refugees that America uprooted yet refuses asylum. Fascists in the EU want a Fortress Europe.  This is far bigger than personalities and individual states. Macron is right: Despots seize on every opening to reshape the world into something ugly and dangerous, with a muzzled press, cowed populations and plunder of global resources.

And yet too many Americans miss the point. Even The New York Times mostly blew off the Macron visit, playing it at the bottom of the front page, or inside, with a focus on Melania, pomp, and dandruff. In France, dailies were also low-key, partly because the French expect so little of Trump. Some dwelt on restored grandeur after the George W. Bush era, when Bart Simpson laughed them off as “cheese-eating surrender monkeys.”

Le Monde’s lead story revealed how the Islamic State burrowed into Syria and Iraq to exact taxes and infiltrate businesses. By one estimate, it has 15 years of cash reserves. Le Figaro and Liberation detailed how Trump policy fuels anti-Semitism.

Back in America, too many people ferociously defend worldviews based on fragments of information from dubious sources that confirm personal bias. Even solid news organizations can only sample events and trends that imperil us. We need to step back to assess what is at risk – and why. This takes time and commitment. But how else do we choose leaders who understand the real world and then hold them to their promises? In sum, we need to grasp context and history.

Start with an immensely readable pair of books by Yuval Noah Hariri, an Israeli who gets it. The first outlines how we evolved from slime. The second outlines how we might avoid reversing the process: “Homo Deus: A Brief History of Tomorrow.” Terrorists, Hariri writes, are like flies seeking to destroy a china shop. They can’t. But if they enrage a bull, it does the job for them. In 2010, terrorists killed 7,697 people, few of them in rich countries. Obesity and related illness killed three million. Coca-Cola is far more dangerous than Al Qaeda.

ISIS was spawned by U.S. torture during the Iraq War, and it spread in the chaos that followed. Local forces, with U.S. and allied support, took back its territory. Now it is a swarm of flies that depends on that bull. You see where I’m going here.

Trump, if ignorant, is hardly stupid. “Terrorism,” a perfect bogey, enables him to undo democratic guarantees and freedoms that go back two centuries. He only needs his deplorable base and apathetic non-voters in crucial states to be reelected. Hariri’s thesis applies to all that matters, from income inequality to nuclear threat to climate chaos. The more we allow Trumpian lies, misconceptions and flip-flops from past positions to stand, the more his fake narrative hardens into ineluctable reality.

Last Friday, Trump arose early and picked up his dumb phone. He ignored huge news from Korea to tweet yet again about James Comey, who did more than anyone to get him elected. Then he congratulated himself for doing what South Korea and China did to find accord with Kim Jong-un. Mainly, they deflected Trump’s shoving match.

What happens next involves intricate diplomacy taking in not only the Korean Peninsula but also the South China Sea and Asia beyond. Think about U.S. policy shaped by John Bolton, Mike Pompeo and clueless warmongers in Congress. If I’ve worn out that Edmund Burke quote – “Evil triumphs when good men do nothing” – consider Albert Einstein: “The world will not be destroyed by those who do evil, but by those who watch them without doing anything.”

That was Macron’s message in Washington. As some fear in France, he may suffer from Napoleon envy, and he likes being in the saddle. But, neither a fool nor an egomaniac, he knows the difference between a horse’s ass and a horse.

Global Geneva contributing editor Mort Rosenblum is a renowned American journalist, editor and author who has based in France while travelling and reporting the world more years than he can remember. You can read his regular column, The MortReport.