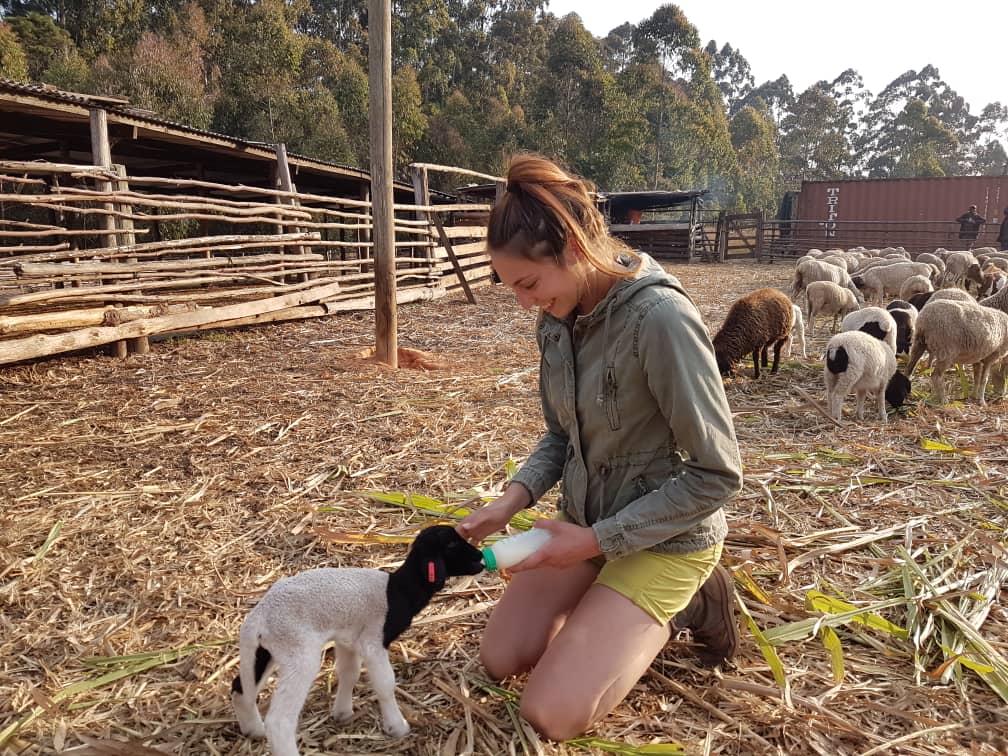 This is part of Global Geneva Group’s Youth Writes educational initiative helping young people to write about their volunteer and other on-the-ground experiences as inspiration for others.

During the autumn-like weather of August 2021, as Covid-19 was still holding back most Europeans from travelling to other continents, I was enjoying my summer holidays in the French part of Switzerland. I had just completed my fourth year of Veterinary Medicine in Bern and was in need of a break.

However, one sunny afternoon, I noticed that I had only one month left before returning for my last year of university. Passionate about becoming a vet, I did not feel like spending any more of my vacation sitting around in my European comfort zone drinking cocktails and seeing friends. After several days of reflection, I decided that it was perhaps time to return to Tanzania.

I had travelled there in 2016 as a volunteer ((See Charlene’s piece on her experience) in between high school and university to work for five weeks in a safari camp in Ruaha National Park in the southwestern part of the country. Ruaha is unique in that it combines wildlife, including migratory birds, from both eastern and southern Africa. This turned out to be the most beautiful experience in my life. And given the people I had met down there, it also reaffirmed my desire to become a vet.

I contacted my old friends, the Fox family, former tea planters, and two weeks later, I headed off to Dar-es-Salaam. My father was not exactly thrilled – times had changed with Covid-19 – but after spending two nights in this Indian Ocean port city, I travelled eight hours by car up to Mufindi in the southern highlands.

At nearly 2,000 meters, this is a well-known tea and lumber district, one of the wettest and coolest in Tanzania, with its hills, small farms and miombo woodlands with Brachystegia trees looking out onto verdant plantations. The latter were originally founded for coffee growing but then changed to tea because of the altitude by German and English planters during the early 20th century. The idea was that I would stay and help out at the Fox farm, plus use my veterinarian studies background to assist local villagers wherever I could.

EDITORIAL NOTE: We make our content available for free in the public interest worldwide. But we need your support to cover our reporting as well as our Youth Writes educational initiative. If you like what we do, then please become a Support Member or Donate.

For the next three unforgettable weeks, I lived unbelievable experiences in the mountains located between thick eucalyptus trees, which serve as fuel to dry the tea, and the plantations themselves with their dams forming small lakes, thus providing a whole series of mini-wildlife areas for birds and butterflies.

I was immediately given veterinarian responsibilities, such as performing horse castrations, improving cattle management, finding a cure against poultry parasites, or selecting the best rams to produce the next generation of healthy lambs. As I was still a student, I still lacked the practical knowledge of a fully-trained vet to perform these operations, yet given that the local farmers and extension workers had little to provide such care I was at least able to contribute something.

My local colleague, for example, was Philibert, who had studied Veterinary Medicine at a Tanzanian university for one year but had not been able to continue as he could no longer pay the fees. So, every night, I worked hard on my theoretical lectures and watched YouTube videos about the medical procedures I would have to do the next day.

Together with Philbert, we did a number of castrations – three horses and five cattle – plus dehorned several calves, spayed a female cat, ‘taildocked’ and castrated numerous lambs. We also had to catch Morka, a completely distressed female stray dog, to remove a poacher’s trap from one of her hind legs. For at least one year, she had suffered and limped around with this attached to her. On grabbing her, our shoes and pants sunk knee-deep in mud, I immediately sedated her in an effort to reduce her stress. We then took her inside, where I put her under a short general anesthesia. Five of us had to work on her to remove the snare, plus all the fur knots from her coat. We kept her inside for a few more days in order to help her feel more comfortable in the presence of humans.

Apart from my limited knowledge of veterinary science, I also completely lacked the proper materials. For basic narcotic drugs or surgical blades, we had to travel to Iringa, a hillside market town – the nearest to where I was – to buy them. Iringa, which was founded by the Germans when part of their East African colony of Tanganyika (from the late 19th century to World War I), is also near the Ismilia Stone Age site, which is believed to date back 70,000 years.

For the remaining materials, there was little to be found. I had to use my imagination to replace even the most basics surgical tools, such as, for example, using a tweezer instead of a needle holder, or a hand sanitizer against Covid-19 to disinfect my non-sterile “surgical gear.”

During these three weeks, the biggest challenge was assuming responsibility for all that I was asked to do. Back in Switzerland, I had been able to watch my teachers performing various veterinary procedures, but as a student, I was not allowed to undertake more than hold a scalpel for my superiors. In Tanzania, it was completely different. I was probably the most medically-experienced person for miles around.

A lack of basic veterinary support

I therefore had to prepare every single detail and procedure beforehand. For example, when they asked me to help with my first horse castration, a stallion named Rafiki, I failed to squeeze the blood vessels long enough before cutting the testicles. This produced a severe hemorrhage. Once the horse was fully awake from being gelded, I desperately tried to compress the wound with a tissue. This caused Rafiki to react with violent blows which dislocated my shoulder. Unable to sedate him again – we had no more tranquilizing drugs – I was unable to re-do the ligatures.

Even though all those around me thought that this was nothing unusual – I wondered how they would have done it – all I could do was pray that the horse was not in too much pain. I also knew that the gelding could die. The next day, I woke early and rushed over to check on Rafiki. The bleeding had stopped and he was doing well. Rafiki recovered quickly without any further complications. Nevertheless, I felt disturbed by the fact that we could not offer better and more sterile conditions similar to what is available back in Europe.

As part of my self-imposed responsibilities while in Tanzania, I tried to share my university experience with Philibert to provide him with at least a better sense of good veterinary practice. I wanted to make sure that he would be able to continue taking care of farm animals properly without imposing any undue suffering on them. I taught him about anatomy and physiology, plus provided the farm with basic veterinary documentation in the hope that he and other members of the community could benefit from it in their daily activities.

Overall, just as I had during my earlier stay in Tanzania, when I was barely 18, I met a lot of incredibly nice people, some of them working at the farm, others in the villages nearby. I also witnessed families with barely the means to pay for their children’s school uniforms. Even though uniforms are mandatory – kids are not allowed to go to school without them –  the state does not support families with subsidies.

Longtime residents Vicky and Geoff Fox, who were already well-known for their work with wildlife, began helping local orphans, many of them left homeless by the collapse of traditional extended families by HIV/AIDSs, began building a ‘children’s village’ with a school and living quarters over 20 years ago. As a means of creating awareness and raising funds, the Foxes founded Orphans in the Wild as an NGO in 2006.

Nevertheless, the donations for such voluntary projects are taxed by the government. I found it hard to believe that the authorities would work against the local population in such a manner.

I know that I will be back soon, but next time, I hope, as a licensed veterinarian, not to earn living but rather to share my knowledge with those who need it. This will be, I think, the greatest gift I can make to the Tanzanian people.

Freshly graduated from a high school in France, Charlène Thiry wrote for Global Geneva about her Tanzanian volunteer experience in 2017. She now lives in Switzerland as a fifth year veterinary student at the University of Bern. She helped found VetHopes, a charity initiative which won a Jane Goodall Challenge award, offering free treatment of pets owned by homeless people. She wrote this article for Global Geneva Group’s Youth Writes initiative helping young people to improve their writing skills through personal stories, but also to become more aware of planetary concerns.