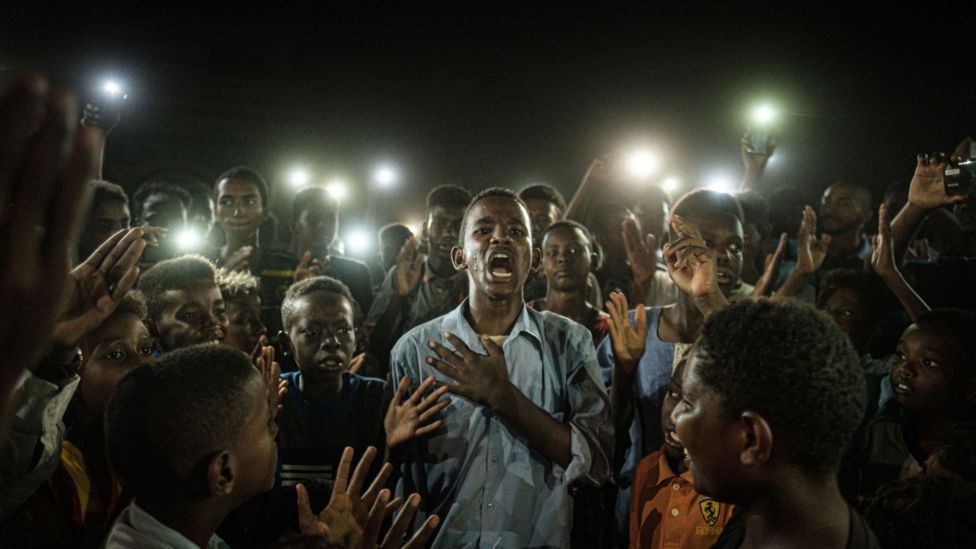 Yasuyoshi Chiba said: “The place was a total blackout. Then, unexpectedly, people started clapping hands in the dark. People held up mobile phones to illuminate a young man in the center. He recited a famous protest poem, an improvised one. Between his breath, everybody shouted ‘thawra’, the word revolution in Arabic. His facial expression and voice impressed me, I couldn’t stop focusing on him and captured the moment.”

Protests had begun in the eastern city of Atbara in Sudan in December 2018, reportedly against the tripling of the price of bread, but then broadened in focus and had spread rapidly throughout the country. By April 2019, protesters demanded an end to the 30-year rule of dictator Omar al-Bashir, who was removed from office on 11 April in a military coup. Protests continued, calling for power to be handed to civilian groups.

On 3 June, government forces opened fire on unarmed protesters. Scores of people were killed and many more subject to further violence. Three days later the African Union suspended Sudan, in the midst of widespread international condemnation of the attack. The authorities sought to defuse protests by imposing blackouts, and shutting down the internet. Despite another severe crackdown on 30 June, the pro-democracy movement was eventually successful in signing a power-sharing agreement with the military, on 17 August.

Yasuyoshi Chiba is Agence France-Presse’s (AFP) Chief Photographer for East Africa and Indian Ocean, currently based in Nairobi, Kenya. After studying photography at Musashino Art University in Tokyo, he started working as a staff photographer for Asahi Shimbun. He became a freelance photographer and moved to Kenya in 2007, and then joined AFP in Brazil in 2011.

For details including other awards of World Press Photo.