Any new hire entering the United Nations these days must be struck by the fact that not only is the institution showing its age, but its top management is too.  The UN is evidently not a young man’s game anymore, if it ever was.  UN Secretary General António Guterres, who, primarily for reasons of status quo rather than inspiring leadership, is expected to be awarded another 5-year mandate when his current term ends on 31 December, 2021, is already 71.

Kofi Annan, a former Secretary General, was a comparatively young 58 when he took the job in 1997, staying on for another ten years.  Of course, the UN is not the only institution run by aging management.  In the US, President-elect Joe Biden is 78.  Nancy Pelosi, Speaker of the US House of Representatives, is 80.  Donald Trump is 74.  Great Britain’s Queen Elizabeth is 94. Russia’s Vladimir Putin is 68.

We have nothing against aging, but we have to ask who will shape the UN of the future? It’s worth noting that the two UN personalities who emerged with some of the best records for performance were Kofi Annan and the World Health Organization’s Halfdan Mahler. Kofi started his career at the UN at the age of 24.  Mahler joined his agency when he was 28. Both spent decades working within the organization and relied on the professionalism of their younger staff to make their missions a success.

Note from the Editors: All our content is made available for free in the public interest worldwide. Other media are welcome to use our pieces. We simply request that Global Geneva Group is cited as the source. Please support us by becoming a corporate or individual  Support Member. We rely on contributions to fund our journalism and global Youth Writes educational initiative, which helps young people to improve their writing skills and to become more aware of global realities, including cyber abuse.

Age is not necessarily a barrier to innovation, but it should be obvious to even the casual observer that too many outsiders assigned to the UN’s top management jobs have political debts to the individual countries that selected them. That is hardly a formula that encourages independence or personal integrity.

Kofi Annan was an extremely effective manager, but he was chosen for the top post of Secretary General largely because the US insisted on having him.  Annan had inadvertently won the support of US military hawks by supporting air strikes that Washington wanted to launch in Bosnia.   His talent as a management leader was simply icing on the cake. The fact that he turned out to be a widely respected secretary general in many ways was more accidental than intentional, and his record was blighted by decisions involving the Rwandan genocide and sexual abuse and harassment within the highest levels of the organization that gave him a start, the UN Refugee Agency (UNHCR). 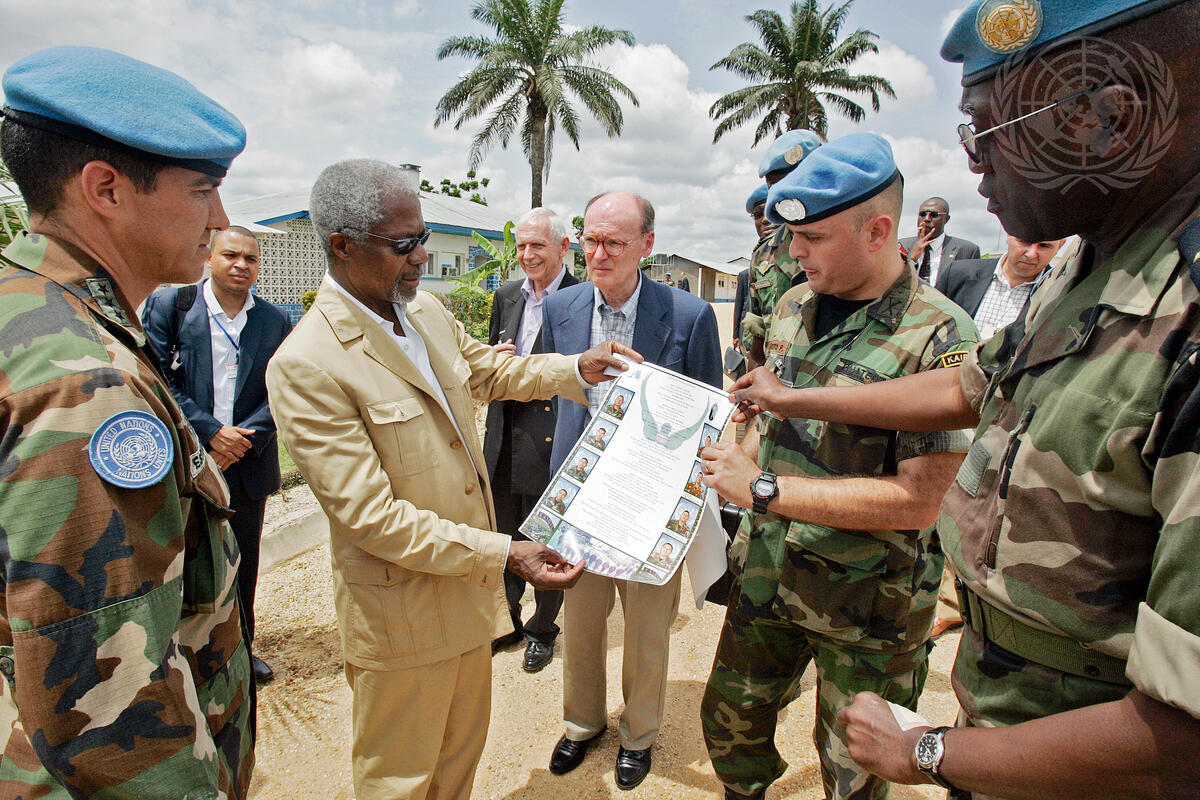 The UN has repeatedly pledged that it is ready to embrace reform, particularly with regard to senior appointments being based on merit rather than political favouritism.  Despite the best of intentions, major donor countries from Sweden to Japan, continue to demand that their preferred candidates be appointed rather than experienced professionals. No wonder the result often is ineptitude and a shortage of new ideas. The system rumbles on, but rarely accomplishes what was originally intended, a major frustration amongst many of those UN professionals, both young and old, who do their jobs well but are hindered by unimaginative or entrenched bosses.

Little has changed under Guterrres. His policy of “quiet diplomacy” has been so discrete that it has gone largely unnoticed. In 2015, before his election, Guterres criticized European nations for ignoring the Mediterranean refugee crisis. We haven’t heard much from him on this since, as a Google search indicates.

Even more questionable than his awkward silence over this major human rights issue of the day is that Guterres has done little to help Haitian victims of a cholera outbreak which most analysts believe that the UN caused. It is no secret that the epidemic began when infected UN Nepalese peacekeepers were sent to the Caribbean nation under Ban Ki-Moon as Secretary-General.  A  “blistering” May 2020 report by 13 independent UN human rights monitors observed: “The bulk of the public health work devoted to root out the illness was carried out by local health workers and aid groups and not by the UN.”

The reason why is not hard to understand. As commentator Stephen Schlesinger notes (also see our piece on how young people no longer want business as usual), the great divide that separates youthful recruits from the current UN establishment is a chronic fear of stepping on the toes of the five permanent members of the UN Security Council, each of whom has veto power combined with a chronic inability to agree on fundamental issues concerning human rights.

It is possible that the world’s political leaders today would have difficulty accepting an internationalist as “effective, innovative and admired” as Dag Hammarskjold was 60 years ago.

A prospect of oblivion

The problem that the UN faces along with everyone else is that global power and the world economy are vastly different today than they were in 1945 when the UN Charter was ratified.  Back then, Britain and France were global colonial empires, China was about to embark on a major revolution that would eventually put Mao Zedong in power and Russia was expanding its influence across Eastern Europe.

Today, each of the original five countries still has the power to stop the UN in its tracks, but is in a vastly different situation with regards to the rest of the world. While the Five still control the UN, countries barely noticed in 1945 have emerged as major world players.  In addition to China, India, Turkey, Iran, Brazil, Argentina and Mexico are all regional powers and have significant economies that affect global markets. Yet when it comes to the UN, they have, at best, only secondary influence.  Italy, Germany and Spain are dynamic European powerhouses, but within the UN hierarchy they lack standing. As for the voices of France or Britain, both no longer commanding global empires, they are today just ordinary countries like anyone else.

The bottom line is that the world has changed, but the UN has not. China and the United States will likely play a major role in shaping the global economy in the next few decades, but India, with a fifth of the world’s population, will not be far behind. Latin America is fast emerging as a global breadbasket nearly equal to the United States. Europe may remain a player, but only if it can unify its resources and get the European Union to work. If Britain cannot manage Brexit – and no one is quite sure what it hopes to achieve by stepping out – it will more likely be relegated to the sidelines as a bit player.

Little or none of that is actually reflected in the current UN organizational structure.  As a result, much of the UN’s potential influence remains unused. The UN is theoretically devoted to world peace, but one has to ask, what is really different today? Who is listening? Who is it really influencing? The fact that lots of international conferences and other gatherings are held, particularly in Geneva, should not be confused with actual achievement.

The need for real youth engagement

A new world is emerging, and yet one has the feeling that the UN has been left behind and belongs to a different age. The planet is already a fifth of the way through the 21st Century, and yet everything around us appears to be constricted by the attitudes and values of the 19th and 20th centuries.  The labyrinth of hallways left over from the League of Nations, where the UN’s European headquaters in Geneva are today installed, has begun to look like a retirement home for aging diplomats. Switzerland, as host country, also needs to do far more than simply talk about “International Geneva”. It needs to communicate better worldwide.

The obvious charge is that the UN, in failing to adapt to the modern world, is becoming increasingly irrelevant. It does not need to be. There are many, including young people inspired by exercises such as the “model UN”, who believe that the world would be a far worse place without it. (See Tom Weiss Global Geneva article Multilateralism under Siege). Certainly, no one would deny that the UN has to deal with the political limitations that it has inherited, but its expertise, its daily contact with the trouble spots in the world, could be turned to advantage if used to educate and sensitize a younger generation

“Our house is on fire,” Greta Thunberg cried out in an emotional warning to the UN General Assembly. Yet what is the UN really doing to bring young people into the climate debate? Here in Geneva, we would like to suggest that the UN could make a difference, and in doing so renew itself. For this to happen, however, it would have to open itself up to the young people who will define the future. This is already occurring in the private sector with more and more social enterpreneurs engaged in highly creative enterprises in their early, mid and late twenties, so why not the UN? (See Global Geneva articles on generational gaps)

We have an unparalleled opportunity to introduce youth to the UN and to acquaint them with the issues and reasoning that could enable them to help move and shape the future of this worldwide institution.  A powerful vehicle for accomplishing this would be the creation of youth councils, young people chosen by their peers for having the most creative ideas on “international Geneva” issues. Each major UN office, for example, would adopt such a council.

And why stop at climate change? The WHO, the United Nations Conference on Trade and Development and the International Labour Organization, even the Human Rights Council, could also set up groups to examine and further explore the issues they deal with, notably health, work and personal safety. These are surely the key issues of the coming decades.

Written and reported by William Dowell, an author and former TIME magazine and ABC News correspondent now based in Philadelphia; Edward Girardet, a journalist and author who has reported for The Christian Science Monitor and the PBS NewsHour and who spent the past year based between Geneva and Bangkok; and Peter Hulm, a UN consultant and former Reuters correspondent based in Switzerland and the Bahamas. All three have reported extensively on UN-related issues.

From Scotland to Uganda, climate catastrophe to female exploitation: these young people are making a difference, 11 December 2020 (LINK)