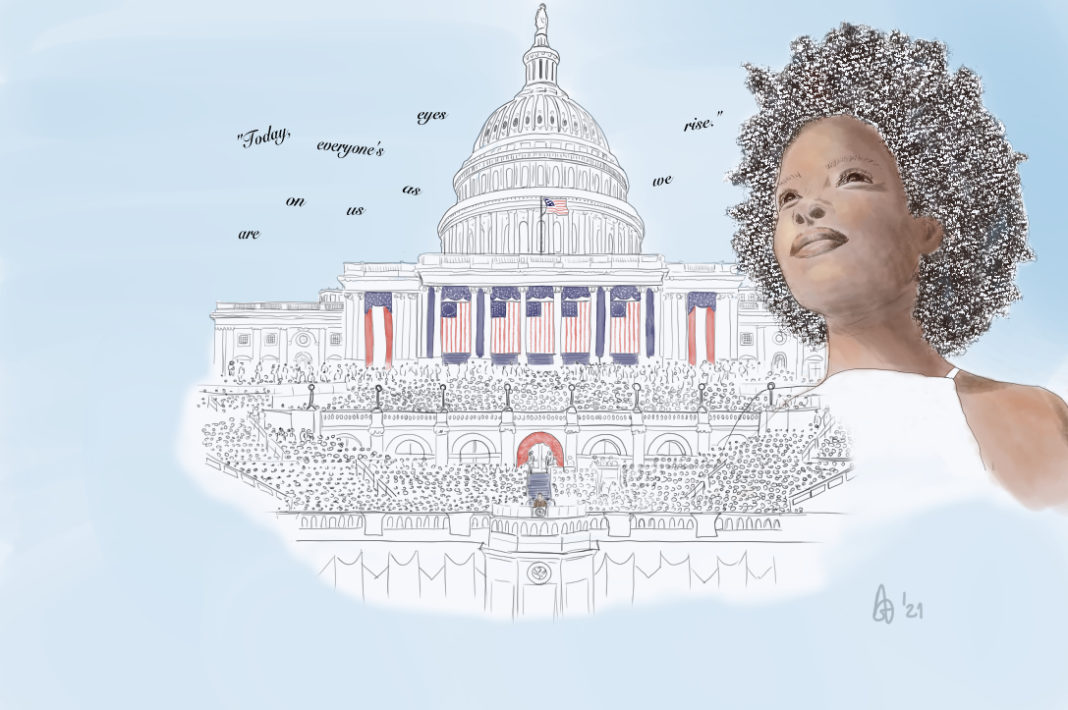 A Rock, a River, a Tree
Hosts of species long departed
Marked the mastodon,
The dinosaur, who left dried tokens
Of their sojourn here

Maya Angelou, On The Pulse of Morning

These are the first words of On The Pulse of Morning, that has since become a classic of contemporary American literature. Its author, Maya Angelou, recited it, draped in a long blue coat, on the steps of the Capitol at the 1993 inauguration of President Bill Clinton. She knew the significance of her poem and the symbol of her presence in front of a huge crowd as immense as the eye can see.

Sitting behind her were the new President of the United States and his wife, Hillary, Tipper and Vice President Al Gore, and across the aisle, George and Barbara Bush. On this January 20th, the poet and civil rights activist gave the presidential inauguration a human and indelible dimension, just as “mastodons” and “dinosaurs” were millions of years ago, “a rock, a river, a tree;” just as Bill Clinton wanted America to accept the darkest sides of its past, as a necessary path to a better future.

John F. Kennedy, Clinton and Barack Obama each extended an invitation for poets to perform on the day of their inaugurations. Robert Frost for Kennedy, Miller Williams for Clinton’s second inauguration in 1997, ElizabethAlexander in 2009 and Richard Blanco in 2013 for Obama. A literary impulse to the rescue of the task at hand?

The day after the Clinton inauguration, the New York Times reprinted Maya Angelou’s entire poem, and the book that was subsequently published became a bestseller.

On The Pulse of Morning begins with memory and ends with the dawn of a world to come:

Here, under the pulse of this new day
You may have the grace to look up and out
And into your sister’s eyes, into
Your brother’s face, your country
And say simply
Very simply
With hope
Good morning.

Joe Biden also surrounded himself on his inaugural day with words and rhythms, images and rhymes written and performed by an African American poetess born in Los Angeles. Amanda Gorman is 22 years old and has already distinguished herself in the highest places of America. She was once the guest of Obama at the White House. The author and feminist has reached a literary height that is rare for her age and for our time.

Amanda Gorman was not, however, destined for poetry. As a Harvard student, she was once invited to the United Nations to attend a speech bv Pakistani Nobel Peace Prize winner Malala Yousafzai. The words she heard transcended her. Gorman took up her pen, started writing poetry and in 2017 became the youngest poet laureate in the United States.

Simply summed up, Gorman is a poet, an activist and a social entrepreneur. Her voice is vital. She has created a writing program for young people, she visits schools throughout the U.S., and she read poetry on MTV and at the Library of Congress. She is no stranger to political power.

She has also just authored the preface to Vital Voices: 100 Women Using Their Power to Empower published by Assouline. (See Global Geneva feature by JC Agid) No wonder her portrait, created by illustrator Gayle Kabaker, is on the cover of this book, which also features Senator Hillary Rodham Clinton, New Zealand Prime Minister Jacinda Ardern, European Central Bank President Christine Lagarde, fashion designer Diane Von Furstenberg, and Ruth Bader Ginsburg. Not surprisingly, her foreword is a poem. After all, it is all about words and sharing them. Those she chose on January 20th, 2021 opened a narrow door to a future of challenges, dialogues and reconciliations. (See Global Geneva article by William Dowell)

Here are five questions I asked Amanda Gorman in October 2020 after the book’s release.

JCA: What is the power of words to change the paradigm on women in the world?

Gorman: “Words are everything and everywhere. They enable us to model the types of leadership and change we hope to see in our communities. For example, in general I tend to notice women leaders more so using a rhetoric of hope, compassion, and fairness. That type of language not only restructures how we think about women leaders, and all the gifts they bring to the table, but also leadership in general, which should be unafraid of empathy and generosity.”

“I’d say today’s youth are already the change-makers of both today and tomorrow! I think with the movements we see spearheaded by youth–the climate crisis movement, the March for Our Lives, and certain parts of Black Lives Matter–they are inherently improved by this generation’s relentless energy and historical understanding. They come with a deep knowledge of our shortcomings of the past, particularly as it relates to the previous exclusivity of social leadership, and have no intention of repeating them.”

Q. Part of your work involves visiting schools. What do you tell students? How do they react? What do they ask?

“As a poet I visit several schools across the country, and it’s always one of the most rewarding aspects of my work. I usually talk about my life, my career, my writing, and the importance of recognizing poetry as an art that isn’t the private property of dead white men. I think they’re often shocked to hear what I’ve been able to do with our writing, because I’m quite young like them, and look younger than I am. So on that note they often ask about my age (some have even thought I’m in 7th grade; I’m 22), and advice I have for them. I also think there’s this excited understanding of how malleable and democratic poetry can be, if we let it.”

Q. Are the media making enough room so that women’s voices are heard?

“No, not at all. I mean one data point you can see quite starkly in the serious dearth of women late-night hosts, a digital venue which is more so becoming the arena where many access information about the news. But, beyond that, so much of the media is men discussing men. I do think we’re making some more headway in that space, and it is invigorating to see women creating their own forms of media and messaging to spread their voices, projects much like this one!”

Q. One of the point you make is about the power to empower. Is that what feminism should be all about?

“Definitely. Feminism, and in particular intersectional feminism (as well as black feminism, which I study), is all about breaking our chains collectively, that none of us are free until all of us are. I believe in that on both a spiritual and pragmatic level. It’s not only morally right, but strategically sound; I can only unlock my sister’s shackles if I break my own. And I can only break my own with another ally beside me, helping me slot in the key.”

Amanda Gorman is the author of The One for Whom Food Is Not Enough. To learn more, please see her website.
Instagram: @amandascgorman
More about Gayle Kabaker’s illustrations: http://gkabaker.com

Jean-Christian Agid is a former French journalist and foreign correspondent. He is founder of 37EASTPR, a media and business development agency based in New York with clients in France, Mexico, and the United States. He is also a trustee on the Advisory Board of the American Friends of the Paris Opera.