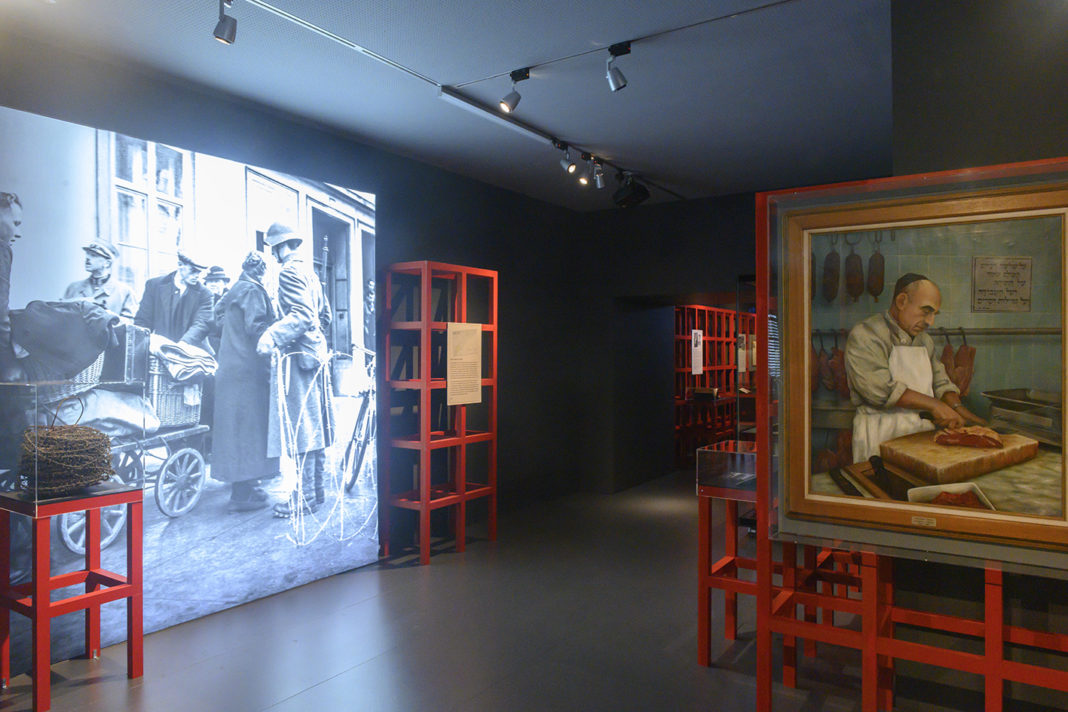 As a baby boomer of Swiss origin born in the United States, I was always fascinated by Switzerland’s survival role as a neutral country during World War II. My British-educated father, who had served as a young officer with the Swiss army and was referred to as “l’Anglais’ (the Englishman), had often recounted how he and his fellow soldiers would share cigarettes with German Wehrmacht guards while patrolling Switzerland’s borders with Germany or occupied France. He also turned a blind eye to Allied officers – several of whom he had known from school or business in the UK – interned in the hotels of the Swiss mountain resort of Davos as prisoners-of-war when they sought to escape via the underground railway down to Spain and Portugal. As part of its neutrality, Switzerland was obliged to hold all captured belligerents, regardless of nationality. (See Global Geneva walking wounded story)

But it was the stories of my grandmother, a reputed concert pianist from Basel who after the war taught at the city’s Konservatorium (Academy of Music), which intrigued me the most. As a performer, she had travelled Europe, including Germany and Italy, until the outbreak of war in September 1939. She had even played before Benito Mussolini, she proudly told me. For a while, my grandfather, a Swiss businessman with a margarine factory in Basel, accompanied her. But he loathed the Nazis and refused to keep his opinions to himself. Once, he openly lambasted Hitler in a restaurant car of the luxury Rheingold train with a group of SS drinking at a nearby table. He was warned never to return as he was now on “Die Liste,” a known blacklist of Swiss who would be immediately arrested were Germany ever to invade.

Global Geneva Group and Global Insight Magazine make our content available for free worldwide in the public interest. If you like our approach to independent journalism, including youth writing, then please join us as a support member or contribute. (MEMBER AND DONATE LINK).

This did not prevent my grandfather from sharing with Allied intelligence the location of German factories on the other side of the Rhine. This enabled RAF and USAF bombers to pinpoint their targets more accurately. Swiss entrepreneurs, particularly those operating out of Basel with its pharmaceutical and chemical industries, continued to do business as usual with their German counterparts throughout the war and thus had a good knowledge of who was doing what, where. As with the rest of Switzerland bordering the German Reich, however, Basel had to maintain good relations with the Nazis by imposing blackout making it difficult for night-time Allied (USAF) pilots to determine the exact position of the frontier. Quite a few bombs fell on the Swiss side, including Basel. (See short video documentary on the USAF and Switzerland)

Much to the embarrassment of my grandmother, who considered herself a “good Swiss” – a citizen who goes with the flow – local police visited my grandfather, who was clearly a “bad Swiss,” to notify him that his actions were illegal and jeopardized Switzerland’s neutrality. Basically, he had indulged in espionage. My grandfather challenged them to arrest him, but they probably figured that it was better for the Swiss economy for him to continue running the margarine factory. They let him off with a warning.

These personal anecdotes somewhat illustrate the excellent exhibition – Grenzfälle (Borderlines) – by the Basel History Museum about the city’s relationship with Nazi Germany from 1933 to 1945. Given its geographic and linguistic proximity with Germany, (Basel also has a border with France), Switzerland’s third largest city and its surrounding region have historically held private, commercial and political ties to their neighbour to the north. This did not change when Hitler took over in 1933, but Switzerland’s relationship was often contradictory and complex if not highly pragmatic.

Grenzfälle, which offers a combination of visual displays, photography, political posters, flyers, news reels, videos and audio documentaries, seeks to show how the people of Basel, the Swiss authorities and local businesses reacted to the Nazi dictatorship on their doorstep. What was their attitude to a regime that had invaded most of Europe, while persecuting and murdering millions of people? While many Basler sought to continue with their lives as normally as possible regardless what was happening on the other side of the border, others felt compelled not to simply acquiesce. Some, too, unabashedly sympathized with the Nazis or used the opportunity of war to do good business.

But individual attitudes to Nazism have changed over the years and even influence the way we regard autocratic populists today or the manner with which we deal with refugees, or not. In many ways, many 21st century societies would act no differently than the Swiss nearly eight decades ago. Should we provide safe haven to Syrians and Afghans fleeing their country’s wars or prevent hapless human beings whose lives were in danger from seeking sanctuary?

Grenzfälle depicts the origin of The Boat is Full 2019 song by Swiss musician Julian Pollina alias Faber (also the 1981 Swiss film by director Markus Imhoof) based on a speech by Federal councillor Eduard von Steiger in Bern in August 1942 when he compared Switzerland to a “small, crowded lifeboat with limited capacity”. The Swiss authorities decided that they could not take all the refugees. Viewed by some as one of Switzerland’s most shameful periods, the Swiss closed their borders to Jews in July 1942, despite the fact that they were already aware of Germany’s mass deportations. As the Museum curators note: “This was a time of ‘borderline cases’ in every sense of the word: geographical, legal, ethical and personal. Contemplating them prompts us to reflect on both past and present.”

Of particular interest to young people, but also a stark reminder for older generations, Grenzfälle offers significant background as to what happened in Germany, such as the persecutions and the concentration camps, while at the same time highlighting, often candidly, what was happening in Switzerland at the time. For example, the exhibition depicts the deportation of over 6,500 Jews from Baden and Saarpfalz just north of Basel during the “Wagner-Bürckel-Aktion” of 21 and 22 October 1940 to the Gurs internment camp in southwest France. Fifty came from the German town of Lörrach bordering Basel, who were rounded up and deported in full view of the public. Most were sent to Auschwitz; few, if any, survived. (Since the 1930s, the family of Jewish teenager Anne Frank had a close affiliation with Basel. Today, the Anne Frank Foundation is based in the city. (See Global Geneva story on the late Buddy Elisa, first cousin of Anne Frank and former head of the foundation).

Grenzfälle also examines some of the Nazi activities carried out on Swiss soil, such as the awarding of a “Cross of Honour of the German Mother” at the German House (Deutsches Heim) in Basel on Mother’s Day 1944. An active part of the Nazi cult of motherhood, events such as this were primarily designed to drum up support from German expatriates or sympathizers in Switzerland. The highest award, a gold cross, went to women with eight or more children.

As the exhibition shows, numerous local institutions and private individuals living in the Basel region were connected in one way or another with the Nazi regime. As Swiss, they had to decide how to deal with a blatantly dictatorial state that practiced such wanton disregard for democracy and humanity.

Grenzfälle’s six sections touch on those social, political and economic aspects of life where this was especially apparent, such as the annual Basel Mustermesse, or trade fair, whose halls were used throughout the year by private, political and military groups. Starting in 1941, visitor numbers soared. The city’s “good Swiss” demonstrated their commitment with schoolchildren packing Christmas care packages for Swiss soldiers, or providing temporary shelter in 1944 for refugees. Jewish refugees, however, were refused entry to the Restaurant Mustermesse as early as 1939. While the NSDAP-AO, or Nazi Party Abroad, was granted permission to hold numerous events at the Mustermesse, the Communist Party was never allowed in despite the left-leaning tendencies of many Basler.

The Nazis operated a political offshoot in Basel with some 4,000 members at its height during World War II, while extreme right-wing Frontists, or fascist organizations were also active in the city. There were sometimes violent skirmishes between the Communists and National Socialists, prompting some members of the Swiss government to consider both sides as threats to the country’s neutrality and democracy. However, there was no consistent approach at the different cantonal and federal levels. While the Communist Party and the Frontists were outlawed, the NSDAP was allowed to operate.

To their credit, most Basler disliked the Nazis and refused to allow the swastika to be flown. Unlike the Austrians, most of whom supported Anschluss, or annexation by Nazi Germany in 1938, the German-speaking Swiss, who use mainly dialects incomprehensible to most Germans and only Hochdeutsch, or High German, when speaking formally, consider themselves utterly different. In fact, there appeared to be greater sympathy for the Nazis in French-speaking Switzerland than the majority German-speaking parts. Even if Goethe and Schiller are highly regarded in Switzerland and considered part of basic Swiss literary education, this does not mean the Swiss see themselves in any way as German.

At the same time, there were often contradictions in the manner with which the Swiss responded to the Nazis. In March 1935 the Gestapo kidnapped Berthold Jacob, a Jew from Strasbourg critical of the Nazi regime, off the streets of Basel. The Federal Council protested vehemently against this violation of Swiss sovereignty. The Nazi authorities eventually felt obliged to return Jacob to Switzerland.

However, when the Basel police arrested Hans Weinberg, a Jewish refugee, for being “illegally” in the city, despite holding a Geneva residence permit, they handed him over to the Lörrach Gestapo, who sent him to Sachsenhausen concentration camp in Berlin. Weinberg was released in 1940 and was able to flee to Palestine. It was only on 1 May 1945 that the Federal Council in Bern outlawed the NSDAP in Switzerland. Police also raided the Deutsches Heim in Basel on 8 May 1945, seizing numerous files and objects.

Grenzfälle offers a highly unusual and timely insight into a crucial period of Basel’s – and Switzerland’s past. It is also a period that for many Swiss has remained embarrassing and one which they tend to refrain from discussing in too much detail. Given what is happening in the world today, now is an appropriate time to examine how societies across the globe deal with issues that affect the fate of human beings, such as refugees or shady business and diplomatic deals with repressive nations. (See Global Geneva piece on the Swiss-China Agreement)