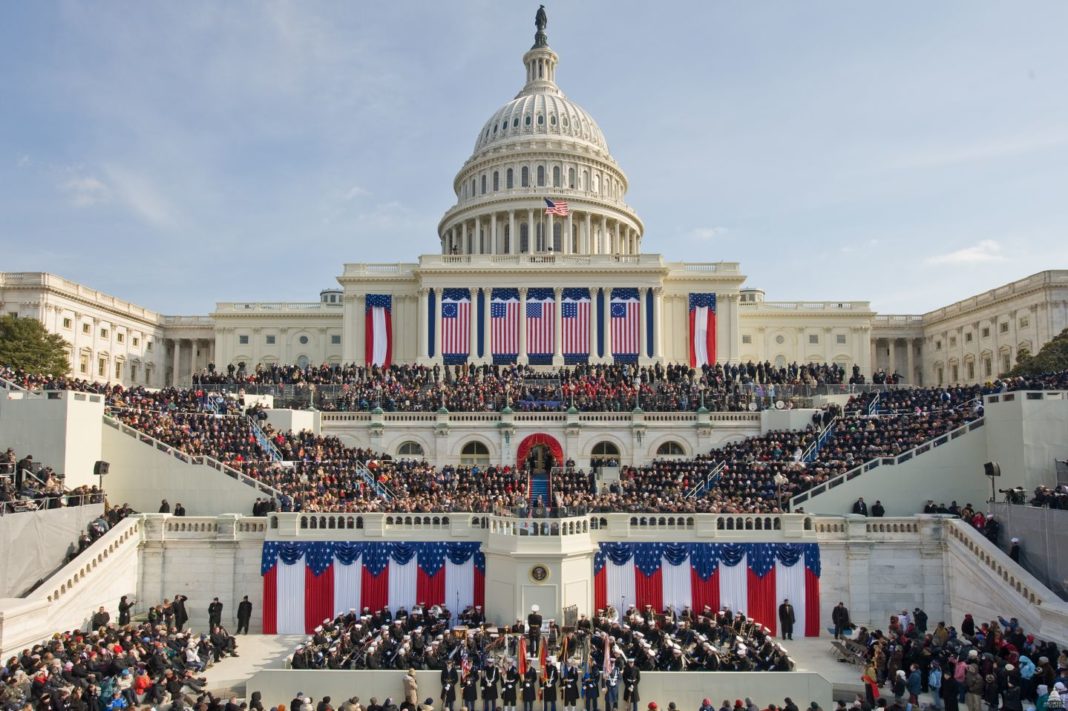 In contrast to past inaugurations, Biden’s ceremony was attended by only around 2,000 carefully selected guests all spaced out to maintain social distancing. Everyone had a mask including former vice-president Mike Pence, who showed up in quiet defiance of his former boss, whose last words to him had been: “I am not your friend.”

The National Mall in front of the Capitol, which would normally be crowded with onlookers trying to get a glimpse of the event was instead filled with a dazzling display of hundreds of American flags. The effect not only seemed right, given the circumstances, it was also strangely satisfying. The vast majority of Americans only get to see the inauguration on television and what they got to see this time was both elegant and impressive.  After Trump’s garish extravaganzas, the sudden reversion to good taste was surprisingly reassuring.

In contrast to the past four years,  the attention this time was centered on a soft-spoken Biden whose speech reassuringly focused on restoring a sense of unity in a country that felt emotionally battered.  Lady Gaga suddenly appeared to render a credible version of the national anthem, and Garth Brooks sang his personal version of Woody Guthry’s “This Land is Your Land, This Land is My Land.” Guthry, a depression era songster, whose words might in earlier times have risked being denounced as sounding too socialist, seemed extraordinarily appropriate in the current atmosphere.

The star of the event, however, was Amanda Gorman, the nation’s new youth poet laureate. A stunning, 22-year-old African American, who grew up in Los Angeles, Gorman appeared in a bright yellow coat and an elegant African hairdo.  Her poem, The Hill We Climb, electrified the audience.

We’ve seen a force that would shatter our nation rather than share it,

would destroy our country if it meant delaying democracy.

And this effort very nearly succeeded.

But while democracy can be periodically delayed,

it can never be permanently defeated.

In this truth, in this faith, we trust.

For while we have our eyes on the future,

history has its eyes on us.

She had managed to capture in verse what the new president had tried less eloquently to express in his speech.

Washington which had briefly turned into an armed camp with 25,000 national Guard troops brought in to protect against disruption by white extremist groups and psychologically unstable hangers on was surprisingly deserted. No one minded the relative calm.  None of the white supremacist threats to create disturbances in state capitals across the country materialized. In fact, America was for once, exceptionally quiet throughout the day.  The calm seemed to mark a new beginning.

With the initial festivities over, Biden moved to the Oval Office in the White House and signed 17 executive orders, most of them reversing Donald Trump’s most egregious abuses of the office.  Biden dashed off a letter stating that the US will now return to the Climate Change accord, and from now on it will begin to seek a leadership role in fighting climate change. Trump had tried to pull the US out of the World Health Organization. Biden dispatched Dr. Anthony Fauci to represent the US at the WHO in a critical meeting on Thursday. Attacks against undocumented immigrants have been stopped. No one will be refused a visa to the US because they come from a Muslim country., DACA and plans to give undocumented immigrants currently living in the US will be extended and a path towards citizenship for undocumented immigrants is now being planned.  Biden’s immediate emphasis will be stopping COVID-19.  He is already working on a bipartisan plan to deal with the economic damage that resulted. Protection against evictions is being extended.

Later in the day, the new White House Press spokesperson, Jen Psaki, delivered the new administration’s first press conference. Psaki’s message: the press is no longer the enemy. From now on, transparency and the truth will be the new policy.  For reporters, it was almost as if the White House had suddenly come awake after four years in a coma.

No one expects any of this to be easy. The coronavirus pandemic is currently killing more Americans on a daily basis than the 9/11 terrorist attack against New York’s World Trade Center. In less than a year, the virus has cost nearly 400,000 American lives– roughly the equivalent of the population of New Orleans. The virus, which the Trump administration initially dismissed as not particularly threatening, is now mutating and is likely to spread even faster causing more deaths and economic damage.  Operation Warp Speed, the Trump plan to vaccinate the population, has turned into a nightmare of disorganization. Reserves of vaccine that were supposed to be on hand turned out to be non-existent.  It may be summer before vaccinations take off in earnest.

Besides killing millions of people, the pandemic has shut down large segments of both the US and the world economy.  Not only are millions of Americans jobless, but the kind of economic resurgence needed to provide new jobs can’t be counted on simply because everything, everywhere, has been frozen in place.  The question everyone has on their mind is how long can we wait?  The answer, of course, is that we don’t have any choice.

While Biden is off to a promising start, ending America’s partisan divide will take a major effort. It   will be further complicated by the fact that an evenly divided USS Senate will be asked to deal with the second impeachment trial of Donald Trump. While Republicans in the senate voted in a block to acquit Trump during his first impeachment, this time may be different.  There is no question that Trump’s incitement to the mob justifies the charge of encouraging insurrection, but some Republicans argue that since Trump will soon be gone convicting him will be superfluous and will only accentuate a partisan divide.

The problem, highlighted by reporters at the first news conference, is that even after leaving Washington, Trump may not be gone. Like Napoleon, banished to the island of Elba, only to escape and again threaten Europe, Trump may already be planning to run for the presidency again in 2024.  Convicting him now would enable a simple Senate majority to bar Trump from holding any future office and that would free Republicans in Congress and the Senate from the fear that failing to submit to Trump risks retaliation from core supporters in future primary elections. The fact is that America needs the GOP, if only as an intelligent opposition to elucidate the inevitable drawbacks in Democratic policies. What the country needs, however, is a rational GOP that acts in the best interests of the country, not an opposition that is composed primarily of a crazed group of extremists determined to overthrow the government.

Historians will no doubt note that Donald Trump’s approach to government was politically doomed from the start. His path to victory depended on the electoral college enabling a group of senators from underpopulated, largely rural states, to ride roughshod over the country’s heavily populated urban centers that constitute the nation’s nerve center for its future economic growth. Trump’s special target for attack was California, whose $3.2 trillion gross production currently ranks the state as the world’s fifth most powerful economy. Had Trump continued, he would have led the country into a downward economic spiral that would ultimately have created another depression.

Much of Trump’s hardcore support during the 2016 election, resulted from insights and initiatives from Trump’s then master strategist, Steve Bannon. Bannon’s bright idea was to realize that since the country is nearly equally divided between right and left, a major effort to energize ultra-rightwing groups that were previously ignored as part of a lunatic fringe, just might be enough to tip the balance in the key swing states that were likely to determine the election. The strategy worked. Bannon eventually left the White House and went on to promote his own brand of fascism in Europe. With Bannon gone, Trump continued to base his support on the base that Bannon had previously identified. It is that base which laid siege to the Capitol and sealed Trump’s final political doom.

All of that is in the past. The key problems today are the pandemic and the economy. The pandemic hit just as Trump was doing everything in his power to reduce government support for healthcare.  As the virus expanded its reach, millions of Americans risked losing their medical coverage along with their jobs. It soon became apparent that the virus made no distinction between rich and poor. To stop it, everyone needs to be part of the campaign.

Even if the pandemic ended tomorrow, the US economy would still be in serious trouble.  Unemployment has stripped the states and municipalities of the tax funds they need to function. That is because after shifting the primary responsibility for dealing with the pandemic to the states, Trump refused to release the funds that the states needed to do the job.  Trump’s tax cuts to the wealthy and major corporations, which squandered the nation’s available resources, did not help. The early days of the Trump administration created the illusion of an economic boom, but it was just that, an illusion. Biden will have the task of restoring a sense of reality and that will very likely result in experiencing some pain.

The United States has often responded well in times of crisis, but here again Trump confused the nation and as a result, it is now more difficult than ever to know who to trust.

Along with rebuilding confidence, Biden will also have to deal with the country’s seriously disintegrating infrastructure. For the US to have even a hope of remaining competitive, he will need to invest substantially in public education and universal healthcare.  Most of all, he will have to convince all Americans of the need to pull together.

Biden, in short, is being faced with an urgent need to deal with multiple fronts of intense, pent up demand. On the positive side, he has had forty years of government experience to prepare himself, he is no stranger to personal tragedy and, at the age of 78, he doesn’t have that much left to lose.  As with every inauguration, this celebration will in a sense be a ceremonial expression of hope for a fresh future under new leadership.  We have more to gain than even Joe Biden, in seeing to it that he succeeds.