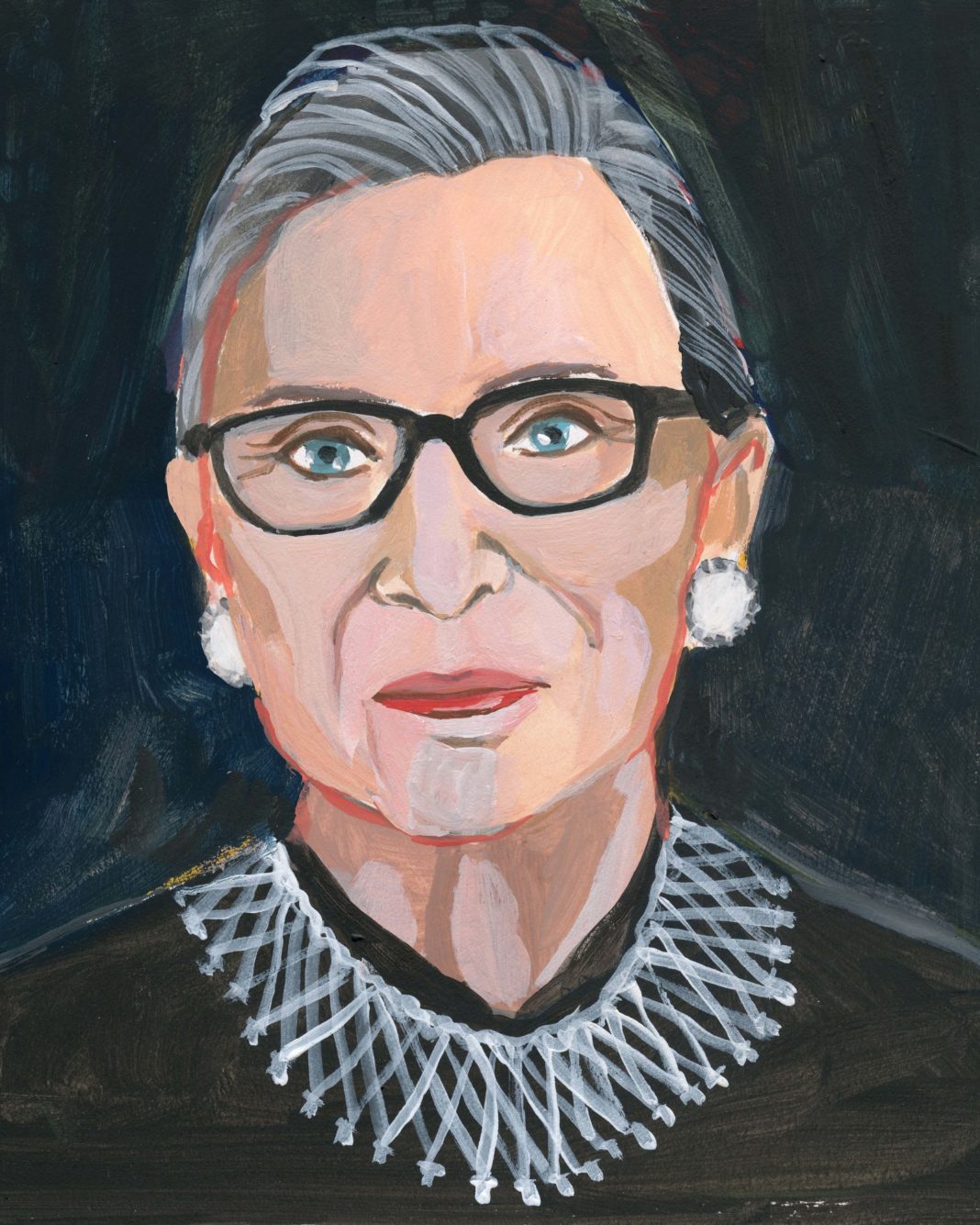 “Women belong in all places where decisions are being made. It shouldn’t be that women are the exceptions.”

Their names are Ruth Bader Ginsburg, who passed away last week, Melinda Gates, Ellen Johnson Sirleaf, Nancy Pelosi, Michelle Bachelet, Geena Davis and Jacinda Ardern. Some have led countries, some head a foundation, one is a US Senator, while another was one of the most powerful judges in the United States. The book also features Panmela Castro, Xiye Bastida, Yin Myo Su, Hindu Oumarou Ibrahim, Andeisha Farid, Amani Ballour, and Tarana Burke. Less known in the Western media, they too run foundations, corporations, paint large murals, engage in politics, and transform the healthcare delivery landscape of their communities. (See Global Geneva French edition version of this article)

One hundred of them are portrayed in this book edited by Alyse Nelson, President and co-founder of Vital Voices Global Partnerships, along with Hillary Rodham Clinton, Melanne Verveer, and Madeleine Albright. This Washington-based non for-profit organization works with women in 182 countries to help them become professionally empowered, visible and heard. There are also 100 portraits painted by Gayle Kabaker, one of America’s greatest illustrators and especially known for her New Yorker covers. One hundred women who share their visions, their ambitions, and their voices. They could be a thousand, a hundred thousand, millions. In fact, these 100 women leaders, activists, lawyers, politicians, entrepreneurs, diplomats, financiers, biologists, journalists, athletes and artists are de facto ambassadors of half of the world’s population.

A reminder: our content is available free worldwide in the public interest. If you like what we do, please become a Support Member of Global Geneva Group, our Swiss non-profit association, or DONATE.

“Thanks to these women of all ages, all cultures and nationalities, we travel around the world,” explains Martine Assouline, co-founder of the eponymous publishing house . “We realize in this book,” she continues, “that women who have already managed to gain independence, freedom, strength, and respect, obviously—and it’s just a beginning—agree to be in tune with those, less known, who have caught up with history thanks to their mostly Western ‘sisters’. This is one of the most touching points of this book.”

Assouline has published Vital Voices: 100 Women Using Their Power to Empower exactly one century after the adoption of the 19th Amendment to the United States Constitution, guaranteeing American women the right to vote, and 25 years after the historic Beijing Women’s Conference. It was there, in China, 5 September, 1995 that, defying fierce opposition in Washington, D.C., then-First Lady Hillary R. Clinton delivered these historic words: “Human rights are women’s rights and women’s rights are human rights, once and for all.”

“Even in a pre-social media era, her message spread like wildfire,” says Alyse Nelson, who then 21, made her way to the Beijing conference and later joined America’s first lady as a White House intern. Hillary Clinton “sparked a new wave of activism around gender equality,” Nelson adds. “Watching Clinton use her voice, her platform and her power to empower other women was a call to action for me, and countless others.”

Nelson’s book leads us to discover the inspiration of today’s vital voices, to hear the words of female leaders at the time of the Beijing conference, and to look ahead through the ambitions of the younger generation. These 100 women express themselves in simple terms with their vocabulary, determination, and message.

Words “enable us to model the types of leadership and change we hope to see in our communities,” notes 22-year-old poet Amanda Gorman, who wrote the foreword for the Vital Voices’ book. “I tend to notice women leaders more using a rhetoric of hope, compassion, and fairness,” she adds. “That type of language not only restructures how we think about women leaders, and all the gifts they bring to the table, but also leadership in general, which should be unafraid of empathy and generosity.”

The Kabaker portraits bring a timeless dimension to these texts. The illustrations result from a woman’s interpretation and creative eye of all the others. One hundred photographs of these women leaders, each with a different luminosity and staging, would undoubtedly have mitigated this imaginary. “Hopefully, we can catch something that a photograph cannot”, explains Kabaker. “My goal was to bring out each woman’s beauty.”

If Nelson’s original idea was to call on a hundred different painters, she immediately suggested that Kabaker take charge of the entire project. “I said ‘Yes’ before she could finish her sentence”, recalls the artist. Assouline appreciates this series of “beautiful, smart drawings, with a very detailed work in the choice of colors–a crazy talent and everyone at the same level, which photography would not have allowed.”

The illustrations help put their subjects into perspective. Fashion designer Diane Von Furstenberg has thus morphed into a superhero. “It was Alyse’s idea,” Kabaker explains. “I first thought that I would paint DVF in her iconic wrap dress, but when I started to research her background, I learned about her commitment as an activist and her passion for the woods.” The result is a ‘Super-DVF’ among the trees, “a Goddess of Nature.”

Other subjects are simpler, yet always forward looking, close-up portraits. The choice for the former International Monetary Fund President and current leader of European Central Bank Christine Lagarde was to draw her from the side. “Her nose!” exclaims Kabaker, “her profile is so dramatic, and I tried to paint women in ways that they had not been featured a million times before.”

Sometimes it is all about extracting a trait of someone’s personality. This is the case with Spanx founder Sara Blakely. “I saw her picture on her Instagram profile. Sara is so funny; she is not afraid to make fun of herself; she talks about how you cannot be afraid of that. I wanted to catch that spirit of her,” Kabaker says.

Other drawings put the women in situ. In Mexico, Saskia Niño de Rivera created Reinserta, a foundation to help hundreds of children imprisoned for being born behind bars, children with dreams of games, of infinite landscapes and freedom, ready to take on life. Kabaker painted them disguised as Mexican wrestlers—the Lucha Libre—with a confident and determined Niño de Rivera in the foreground.

Not knowing most of the women in this book was Kabaker’s greatest challenge. Even when she had met them, it took her patience and multiple readings to capture and recreate their individualities. The first attempts at drawing Nigerian activist Hafsat Abiola—also President of Women in Africa and arguably one of the most influential women Africa nowadays—were failures. Nelson called the painter and told her she did not recognize her friend in the illustration. “I actually met Hafsat at the Vital Voices gala in Washington DC and took my own photograph of her,” Kabaker says, “but she is a chameleon and looks different in many pictures.”

“These are positive, pleasant portraits, they are not mawkish, but strong and welcoming,” Assouline sums up. “Women never appear as victims.” On the contrary, the publisher adds, “these women show authenticity, they share ideas and convictions.” They express “a quiet strength, a natural and unpretentious authority, without looking for an argument.” The 100 women of Vital Voices’ book seem to repeat the same message, ‘We are here, we are active, and we will move forward.’

“Forward the feminine!” concludes Assouline, “and don’t be afraid of this femininity.”

Jean-Christian Agid is a former French journalist and foreign correspondent. He is founder of 37EASTPR, a media and business development agency based in New York with clients in France, Mexico, and the United States. He is also a trustee on the Advisory Board of the American Friends of the Paris Opera.