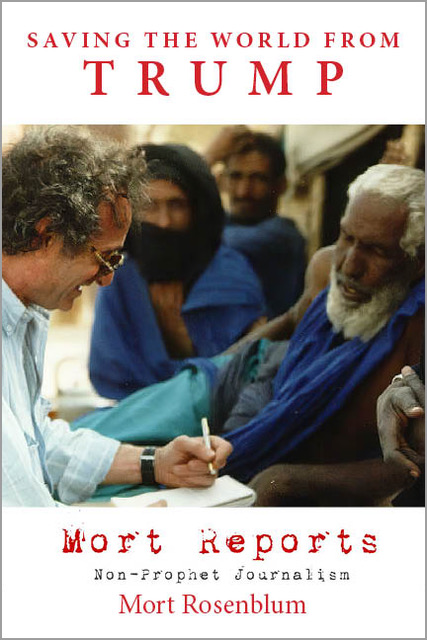 Global Geneva contributing editor Mort Rosenblum must rank as one of the world’s most travelled and experienced reporters covering both war and peace with nigh on 200 countries on his list. A former Associated Press correspondent as well as editor of the International Herald Tribune in Paris (now the International New York Times), his 57 years of reportage, analysis and insight have proven exceptional. Not only that, but his numerous books have covered issues that are even more relevant today given the extraordinary context they offer. These range from conservation and environment in Africa to climate change, global politics, the state of journalism and, yes, olive growing.

Based out of France and Tucson, Arizona, Mort has watched – and reported – with horror as U.S. President Donald Trump has emerged as what he perceives as “unhinged, narcissistic sociopath” and one of the world’s greatest threats. These observations appear in his latest book, Saving our world from Trump, which is illustrated by contributing Global Geneva cartoonist Jeff Danziger. (See details below on how to purchase this book with all funding going into reporting)

Here is his latest Mort Report. 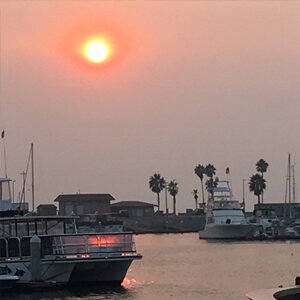 OCEANSIDE, California — A gorgeous red-orange full moon hung over the harbor in the darkening twilight, just what beach lovers hope for after a business-as-usual summer day in paradise. But it was afternoon; that moon was the sun.

The world we knew is over. Who would have thought you’d need a Butch Cassidy bandanna to approach a bank teller? Or that we exceptional Americans are refused entry in all but a few score countries we’d rather not visit anyway.

And if we get it wrong in November, the consequences for America and the rest of a planet it once helped keep on course are beyond imagining. World Bank reports now use a new abbreviation: “FCV” for fragility, conflict and violence.

I’ve taken a break from the Mort Report to kick into a higher gear.  A new book of past dispatches and fresh reporting — Saving Our World From Trump — is out this week. Its focus is vital: What we don’t know is killing us.

As I write, unprecedented wildfires across California have burned an area larger than Connecticut. Nearly two million acres are ablaze in Oregon and Washington. In the Southeast, a deadly hurricane rages from Florida toward Louisiana.

In Oceanside, north of San Diego, no one yet needs N95 masks for smoke, just the normal kind for a deadly pandemic that spreads unchecked despite assurances from a president who says, preposterously, a vaccine will save us before Nov. 3.

It was plain in 2016 that an unhinged, narcissistic sociopath portended calamity. A week before Donald Trump’s inauguration, I titled a piece, “This Is a Coup d’Etat, Plain and Simple.” But I never expected so many Americans would cheer him on.

In countless coups I’ve covered since 1967, armed forces crushed resistance, muzzling the press and often leaving streets awash in blood. If Trump succeeds, we will have let our democracy die because of simple apathy and ignorance.

Trump has inured America to so many lies and idiocies that much of the country has lost its grip on reality. Few stop to realize that Earth is a closed ecosystem, and borders are only lines on a map. Rather than work with allies to confront crises, Trump and his Republican enablers chop holes in a sinking ship.

Trump, finally moved to visit California, blamed state officials for not raking underbrush. “It will cool down, you just watch,” he said. When told that science disagreed, he echoed his line on the virus. “I don’t think science knows, actually.”

In fact, 57 percent of California lands are federal. The U.S. Forest Service was set up after wildfires in 1910. Only 3 percent is state land. Lightning ignites drought-stricken forests, which burn across treetops. But Democrats run California.

Bob Woodward erased any doubt that Trump misread Covid-19. He knew in January it was deadly but decided not to frighten people (or spook the markets). Looking back, he told Woodward his non-action was perfect: “Nothing more could have been done.”

Law books define depraved-heart murder as willful negligence, a capital offense in some states. Trump’s victims now approach 200,000. Yet he still masks reality, forcing the CDC to hide data and pushing the FDA to approve quackery.

But even many who follow real news miss the global impact of Trump’s foreign policy based on appealing to campaign donors and his cult – and his desperate need for scapegoats to cover up his own calamitous mistakes.

Blitzer noted that the billions Trump claims America gave Tehran were Iranian assets unfrozen in the deal with Europe, Russia and China along with the United States. Still, Kushner all but accepted in advance a Nobel Peace Prize for his father-in-law.

In 2018, the Nobel committee rejected two nominations for Trump as fake. This time, a far-right Norwegian legislator added Trump’s name to more than 300 hopefuls on the list. That’s a long shot.

Diplomatic ties are an important step, but this is a transaction, hardly peace in the Middle East. The UAE expects F35 stealth fighters to use against Iran, raising heat in the region. That endangers Israel’s air superiority should things turn ugly.

Benjamin Netanyahu’s hardliners solidify their position with only an undefined promise to suspend annexation of land attributed to Palestine. Growing anti-Semitism and Iran-backed terrorism feeds on perceived injustice to Palestinians.

In a final question, Blitzer tore into Kushner on a subject closer to home. Trump had retweeted a blatantly false accusation that Joe Biden was a pedophile.

Russia looms larger than ever. A bipartisan congressional report, nearly 1,000 pages and three years in the making, linked Trump’s campaign managers to Russia. Trump, not specifically implicated, dismissed it as yet another hoax.

Richard Clarke, national security coordinator for Bill Clinton and George W. Bush, warns that Russia is working hard to get Trump reelected so it can expand its control in Europe while spreading its power in the Middle East and beyond.

“What Vladimir Putin seeks is to rip the social and political fabric of America, to create chaos, to sow public distrust in the government and to set us at each other’s throats,” he wrote in the New York Daily News.

NATO should be a solid defense against Putin’s ambitions, but Trump has turned friends into foes. Angela Merkel, now the effective leader of the alliance, is fending off neo-Nazis at home and Russia to the east. Trump calls her stupid.

The big worry is China, which Trump has in a few months’ time turned into an implacable foe when he needed someone to blame for his Covid-19 folly. Xi Jinping is biding time in hopes of regime change in Washington.

China and America need each other. They have to lead global efforts against climate chaos, pandemics and trade barriers.  That demands the quiet diplomacy Biden has mastered since the 1990s on the Senate Foreign Relations Committee.

We badly need eyes and ears in China. The global health experts Trump recalled would have spotted a novel coronavirus early from contacts in Wuhan. Until recently, U.S. newspapers, broadcasters and agencies staffed Beijing bureaus.

Because of Trump’s bullying, Xi has banned American reporters as he subsumes Hong Kong, menaces Taiwan, militarizes sea lanes and hurries to reshape the world in his authoritarian image. Vaccine research is no longer shared.

This sampling does not begin to cover it. Given what our planet now faces, if nations don’t work together, it will all be over sooner that most of us realize.

But even here in California, where people fled for their lives from firestorms and breathing the air in some cities was more toxic than inhaling 20 packs of Camels a day, the focus was on the present, not the future.

Media Matters examined TV coverage of the fires over the Labor Day weekend; 15 percent of reports mentioned climate change. During all of August, only 4 percent of broadcast segments on the fires touched on the larger crisis.

And the wider world seemed to have vanished in the smoke. Smart people who excel at technology and can tell you the jockstrap size of every player in professional basketball know little about global crises that shape their daily lives.

Over four days of roaming sizable Oceanside, I found no trace of a newspaper, not even a discarded chunk of the Los Angeles Times. But I found shops full of beach gear, souvenir tchotchkes, t-shirts and such. Most of it was made in China.

Conversations about threats an ocean away routinely drifted to the beach at close hand. But new reports from Antarctica say two enormous glaciers are breaking free. When warmer air and water melt them, the seas will rise by about 10 feet.

In 1998, Mike Davis, a MacArthur Fellow historian and a fine California writer, published a book titled Ecology of Fear. It imagined the impact of manmade disasters on Los Angeles. Today we are beyond imagining. Just smell the air.

Global Geneva contributing editor Mort Rosenblum is a renowned American journalist, editor and author currently based in France and Tucson, Arizona. He has travelled and reported the world more years than he can remember. His regular column, The MortReport, is available online and by email.