Florida is paying bounty hunters for the third year in a row to capture thousands of Burmese Pythons that have overrun the Everglades, a vast area of subtropical wetlands, lakes and rivers, stretching from the southern tip of Florida to Lake Okeechobee in the heart of the state. So far, more than 2,500 Burmese pythons have been “humanely euthanized”.

Over 1,000 enthusiasts applied to search for the secretive serpents. Only 50 got the job. They are helping eradicate the snakes that are set free as unwanted pets, or escapees like those that fled breeding facilities demolished when Category 5 Hurricane Andrew unleashed its might in Miami and its environs in 1992. The hunters’ territory is also growing as the Burmese Python in the U.S. migrates north beyond the Florida border into neighbouring Georgia. The constricting snake originates in the marshes and jungles of Southeast Asia, but has established a strong hold in the Everglades, “a very slow-moving, shallow river”, dominated by sawgrass.

The reptiles sometimes grow up to 23 feet (7 metres) in length and are indiscriminate eaters preying on native species including marsh rabbits, deer, wading birds, opossum, and alligators. In April of this year a 17-foot-long (nearly 5.2m) female python, the largest ever captured at Big Cypress National Preserve in the Everglades, weighed 140lb (over 63kg) and contained 73 developing eggs.

While Florida strives to eliminate Invasive Non-Native Species (INNS) such as destructive snakes, fish, insects, and plants, some countries in Asia are breeding Burmese and reticulated pythons in captivity and partnering with IUCN’s Boa and Python Specialist Group (BPSG) to foster cooperation between conservationists, governments and the private sector in the promising future of biotrade.

This article is part of Global Geneva’s regular focus on conservation and the environment, including climate change.

In Florida and elsewhere it is becoming illegal to release INNS into the wild. They are one of the top five threats to the environment costing the U.S. economy at least $120 billion a year according to a 2005 study. Given the sharp increase in invasive species not only in the U.S. but also in all countries, the outlays are skyrocketing. A report released by the U.K. government states that £1.8 billion is spent ($2.3 billion) annually and much more is “needed to tackle the threat”.

The report emphasizes that “it is hundreds to thousands of times cheaper to prevent invasive species from establishing”, rather than eliminating after they have taken root. The first line of defence against invasion are biosecurity measures and closing pathways of entry including: horticulture escapes, contaminants of ornamental plants, ballast water and hull fouling, stowaways on planes, in suitcases, trains, or fishing equipment, contaminants of aquaculture animals, and escapes by pets, and from botanic gardens or zoos. 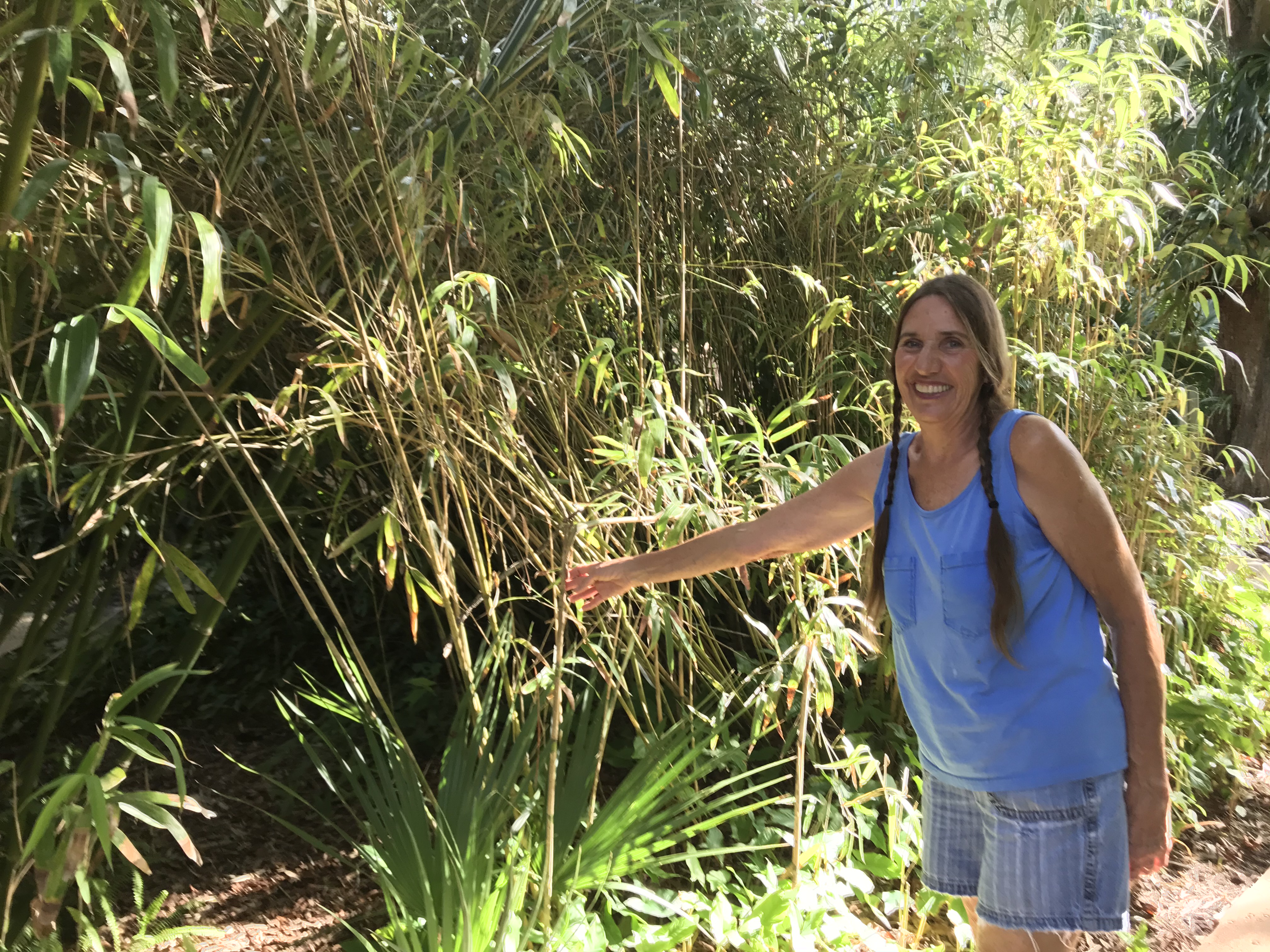 Janett Taylor, Garden Artisan, who has managed the botanic gardens at the Ormond Memorial Art Museum in Central Florida for 40 years points out Clumping Multiplex Bamboo which grows tightly together in one spot – unlike nearby Invasive Arrow Bamboo that spreads rapidly. (Photo: Elizabeth Kemf)

Invasive plant pathogens can be extremely dangerous. A non-native fungus, now present in all UK counties, has caused severe ash dieback. Caused by a non-native fungus, the disease was first reported in Poland in 1992, and in the UK in 2012 after it was picked up in a nursery in the Netherlands. Dutch elm disease is another example of a pathogen epidemic that has resulted in the loss of billions of elm trees globally.

Janett Taylor, Garden Artisan, who has managed the botanic gardens for 40 years at the Ormond Memorial Art Museum in central Florida — minutes from where I live adjacent to Tomoka State Park — guided me to what she said was the Garden’s centrepiece, a tall robust Dutch Elm tree. “It’s a non-native species to which we have given shelter and it flourishes, despite the dieback of elms elsewhere in the U.S. Not all non-native species are invasive and not all native species aren’t harmful.”

She handed me a field guide to native and invasive plant species in the Gardens, which welcomes visitors to “find inspiration in nature” and learn the difference between some Florida native and non-native species. The brochure Plant This, Not That illustrates plants that look alike, but warns visitors against mistaking the golden petals of Wedelia, which can take over landscapes, for Beach Sunflowers. The sunflowers attract butterflies, flowering in Florida’s sandy dunes and gardens “year-round in hot, dry sites”. Volunteers or citizen scientists help Janett orchestrate upkeep of the Gardens every week as they have always done for four decades.

According to the IUCN Species Survival Commission (SSC): “Alien Invasion is second only to habitat loss as a cause of species endangerment and extinction.” Lead author of the U.K. report, Dr Hanno Seebens, warns that up to 16 per cent of all animal and plant species have the potential to become invasive alien species (IAS).

Europe is clearly concerned as are a growing number of nations. “Spain is literally the paradise for invasive parrot species in Europe,” according to Parrots Daily News. Monk parakeets throng in London along the Thames near Kew Gardens. So do Ring-neck Parrots and Quaker Parrots in Barcelona near the Gaudi Cathedral, and barking deer can be seen outside Henley near London. They might all delight tourists and locals but they are invasives, no matter how benign.

So are the not-so-cute Desert Horned Vipers from Morocco spreading up into Spain, or deadly mosquitoes migrating north into temperate regions carrying illnesses such as dengue and Zika, first detected in Uganda in 1952, and now spreading in South America, or the lethal Asian hornet found everywhere in France. It is believed to have hitchhiked in a pottery shipment from China in 2004, and was discovered in Britain in 2016. Hornets’ nests were weaponized during the Vietnam war and its sting can induce anaphylactic shock.

The hornets claimed the lives of a number of victims in France in 2018, one of the hottest years on record with scorching temperatures in summer and a mild winter. Global Geneva’s Editor, Edward Girardet, spotted one in Cessy, France, in gardens near Geneva this past summer. The carnivorous predators prey on insects including the critically-endangered honeybee in addition to the health threats causing massive declines in honey bee colonies. The falling beekeeping production has wiped out many beekeepers’ income, as well as millions of vital pollinators.

For centuries, people all over the planet have – with the best intentions or unwittingly or accidentally – introduced thousands of fungi, plant, and animal species into the wild. In the U.S. these include the common tumbleweed (originally from Russia), European starlings, snake-head fish from Africa and Asia and the Sirex woodwasp. Native to Europe, Asia and northern Africa, the Sirex have also spread to South Africa. First detected in 1962, the tree-crunching wasp threatens the country’s 16-billion-rand ($1 billion) forestry industry. In addition, North America’s smallmouth bass has “outcompeted indigenous fish species” in South Africa concludes a 2017 report released by the National Biodiversity Institute. The report holds that invasive species are “responsible for a quarter of the country’s biodiversity losses”.

Invasive plant species suck up South Africa’s water so rapidly that Cape Town, was just 90 days away from turning off the taps last year. The low water-supply was compounded by a three-year drought, which some scientists attribute to climate change. Day Zero – the point at which its municipal water supply would be shut off – was averted by enforcement and compliance of strict water restrictions. “Threatened by one of the worst-ever drought-induced municipal water crises, residents became water-wise,” says the Swiss-based World Economic Forum. “People were instructed to shower for no longer than two minutes. A campaign with the slogan ‘If it’s yellow, let it mellow’ promoted flushing the toilet only when necessary. And the use of recycled water – so-called greywater – was also pushed”. Today, the city’s parched dams are over 80 per cent full.

However, South Africa is not letting its guard down. The country knows that invasive alien plants (IAPs) threaten water security and intensify the impact of extreme weather events, including severe droughts, floods, and forest fires. It is estimated that invasive plants cover about 10 per cent of the country and the problem is growing. Since its inception in 1995, South Africa’s Working for Water (WfW) programme has cleared more than one million hectares of IAPs. A silver lining is that such clearance is providing jobs and training to around 20,000 people from the most marginalized sectors of society per annum. Of these, 52 per cent are women.

The water hyacinth, originally from South America, is choking South Africa’s dams and waterways. It is rampant throughout Africa, Asia, Oceania and North America, including Lake Okeechobee in central Florida, limiting oxygen and sunlight. Destructive “infestations have impacted fish levels, blocked navigation routes, increased disease and affected access to water by reducing hydropower capacity,” according to the Global Register of Introduced and Invasive Species (GRIIS). The GRIIS database uses a series of country-specific checklists to help governments highlight problem invasive species and offers a basis for countries to prepare their own national strategies to combat invasive species. The good news is that growing numbers of farming communities in Thailand, for instance, are now harvesting water hyacinth not only to keep the canals clear, but to process them into readily-marketed plant fertilizer.

The landmark UN global assessment report from the Intergovernmental Science-Policy Platform on Biodiversity and Ecosystem Services (IPBES), released in May 2019, concludes that invasive species’ numbers have risen by around 70 per cent since 1970. They have contributed to 40 per cent of animal extinctions over the past 400 years and are the biggest threat to biodiversity on islands.

New Zealand’s citizen scientists and volunteers: a model for other countries

New Zealand, whose diverse population is expected to reach 5 million in 2020, is a “world leader” in biosecurity with governments around the globe heaping praise on its Biosecurity Strategy 2025. The small multi-island-nation points out that “Biosecurity 2025 is a partnership between people, organisations, Māori, and central, local and regional government. Its aim is to make our biosecurity system more resilient and future-focused to protect our taonga (treasured things) and New Zealand from pests and diseases”.

Targets include ensuring that:

By 2025 at least 150,000 people with identified skills can be quickly drawn on to respond to biosecurity outbreaks. Citizens will report sightings or release of invasive species to a hotline or to local agencies. There is no blacklist of what can’t be imported into New Zealand. Rather there is an approved list of what can be imported in order to protect its environment, flora, fauna, and human health. New Zealand’s goal is to stop pests and diseases at the border, before they invade or infect the country, while getting rid of or managing the impact of those already there. It is a role model for biosecurity, biodiversity and citizen science. The team will soon be five million strong.

* Update 15 June 2020: The museum was closed for almost three months this year because of COVID-19. The Gardens remained open to visitors with guidelines on social distancing. Janett, with her valiant team of volunteers or citizen scientists, orchestrated upkeep of
the tropical urban oasis designed by Belgian-trained Chicago landscape architect, Henry Stockman, in the 1940s. The brochure Plant This Not That! is still available from the museum (LINK)

Prof. Elizabeth Kemf is a journalist, anthropologist, writer, and a member of IUCN’s World Commission on Protected Areas and of Tomoka Poets. She currently lives adjacent to the Tomoka State Park and the Tomoka Marsh Aquatic Reserve in Florida after several decades of campaigning with international environmental organizations based in Switzerland.