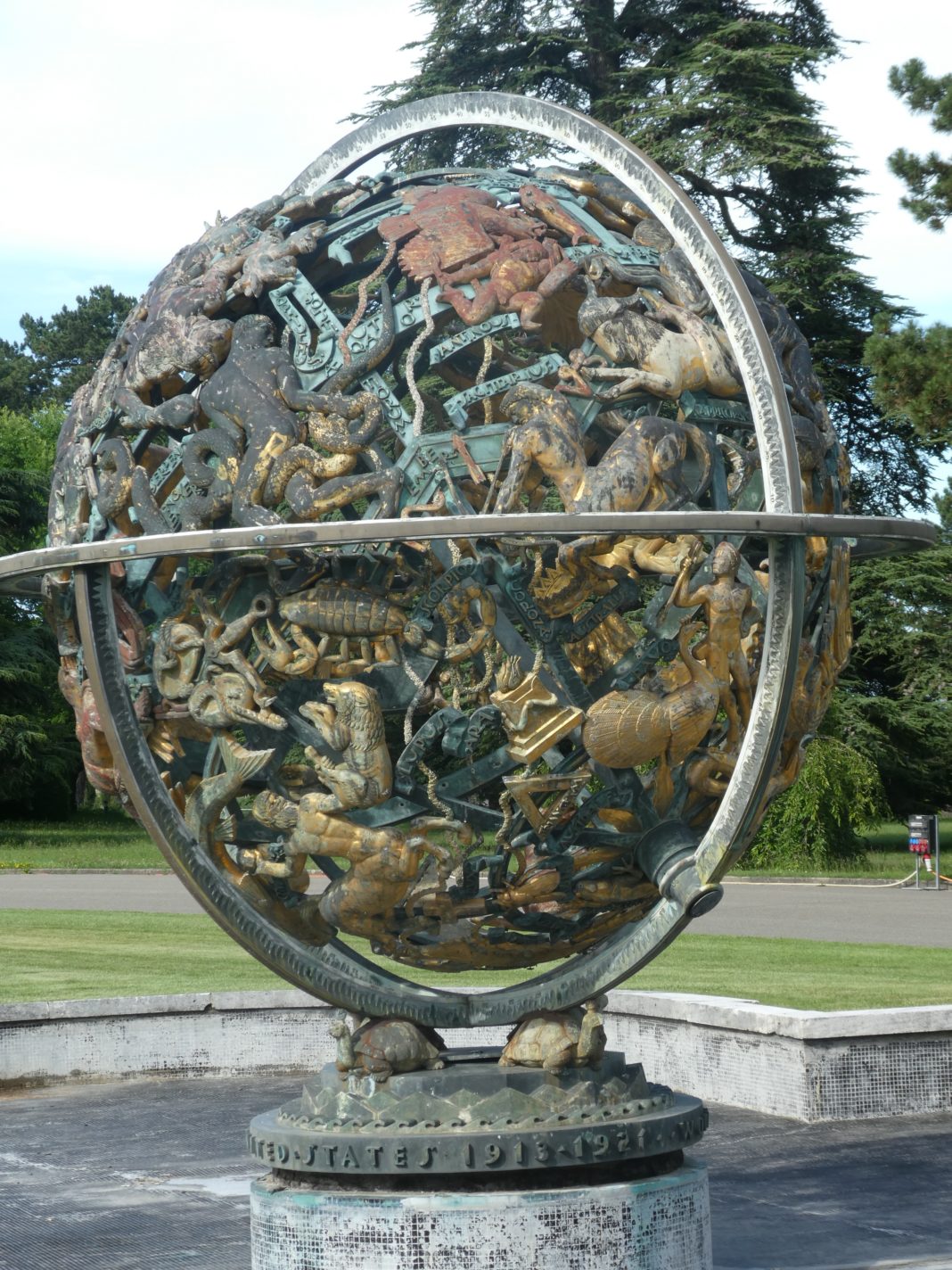 THE “CELESTIAL SPHERE” IS A LARGE STEEL AND BRONZE outdoor sculpture located on the campus of the United Nations headquarters in Geneva. Readily recognized as a symbol both of the UN and the “International Geneva” community, it has endured the wear and tear of nearly 80 Swiss winters.

This historic work of art is now in the process of being restored to its original glory and, it is hoped, to serve as an ongoing emblem of world peace despite the numerous wars and humanitarian crises that continue to plague the planet. The restoration work has been funded by an anonymous donation, and the project is expected to be complete by September 2019, in time for a celebration of the centennial of the founding of the U.N.’s predecessor, the League of Nations, in the aftermath of World War I.

CLOSELY TIED TO THE HISTORY OF THE LEAGUE OF NATIONS

Created by American artist Paul H. Manship (1885-1966) and cast in Italy, the Celestial Sphere represents the heavens as seen from Earth in the form of an “armillary sphere,” an ancient tool used in many cultures to demonstrate the revolution of planets or stars. Manship intended the Celestial Sphere to rotate on an axis, and part of the restoration project is to restore that original mechanical rotation.

The sculpture itself is over four metres in diameter and presents 64 cast bronze figures of characters from ancient mythology representing constellations. These include the 12 symbols of the Zodiac, such as Scorpio, Sagittarius and Taurus, but also other constellations ranging from Ursa Major and Orion to the Southern Cross. The artist placed 840 silver-gild stars with astronomical accuracy on the work. The intended visual effect is for the viewer to see the constellations and innumerable stars spinning in the sky overhead

The Celestial Sphere is closely tied to the history of the League of Nations, which although lasting barely two decades serves as the basis for the UN that we know today.

The sculpture was installed in 1939 to crown the Cour d’Honneur at the just completed Palais des Nations, the classical-style world headquarters of the League which was built between 1929 and 1938. Various governments and institutions donated artwork or fixtures to help with the construction and decoration of the building. The Celestial Sphere itself was a gift of the Woodrow Wilson Foundation, which operated from 1921 to 1993 to perpetuate the humanistic ideals of American President Woodrow Wilson (1856-1924). The sculpture’s purpose was to commemorate the 20th anniversary of the League’s founding and to honor the leadership of Woodrow Wilson, who received the 1919 Nobel Peace Prize for his efforts establishing the League.

Officially referred to as the “Celestial Sphere – Woodrow Wilson Memorial,” Manship’s masterpiece reflects his renowned Art Deco style. The “Prometheus Fountain” at  Rockefeller Center in New York, for example, is one of his best-known works. At a time when the United States controversially had not joined the League of Nations, this project was a tangible connection between New York and Geneva. Manship’s art often embraces the modernization of classical Greek, Roman and other ancient sculptural forms.

The American artist was engaged to design the Celestial Sphere in 1935 and worked for nearly five years on the project, traveling to Geneva to see the Palais des Nations under construction and contracting a foundry in Florence, Italy, to cast the sculpture. Manship worked closely with Italian artist and foundryman Bruno Bearzi (1894-1983) to bring the Celestial Sphere into creation. Bearzi was later knighted by the Italian king in recognition of his efforts to save and restore Italian sculpture and other works of art during and following the World War II. 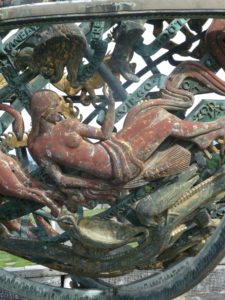 AN IRONIC SYMBOL OF PEACE ON THE ONSET OF GLOBAL WAR

Bearzi and his crew installed the Celestial Sphere literally as World War II began. The completed sculpture, weighing about 6,100 kilograms (over 6.7 tons) was shipped by train from Florence to Geneva. As with any complex project, the completion and delivery of this sculpture were postponed several times. Finally, the sculpture was loaded at the foundry and taken to the train station in Florence, arriving in Geneva three days later, on Wednesday, 30 August 1939.

“What a most extraordinary coincidence, and almost a sardonic one,” wrote Arthur Sweetzer, an American employee of the League of Nations in Geneva, in a letter dated 1 September 1939 to Hamilton F. Armstrong, president of the Woodrow Wilson Foundation in New York. “The Woodrow Wilson Memorial is being put in place on the League of Nations’ grounds as the next World War is just breaking out.” Sweetzer correctly saw Germany’s invasion of Poland that day as the thunderclap announcing the beginning of World War II.

Sweetzer, who later went on to help create the International Baccalaureate (IB) education programme, noted with remarkable foresight that, “while the human family is tragically demonstrating that it has not yet risen to the level of Woodrow Wilson’s ideals and purpose,” he had set into motion a movement that would eventually come into its  own. The experience of these past twenty years will not have been lost; bitter though the present situation is, the new Peace Conference will at least start off far ahead of where the previous one started.” In the immediate aftermath of World War II, the UN was created on 24 October 1945, based on the experience and lessons learned from the League of Nations.

As with any work of art, the Celestial Sphere is open to many interpretations. I imagine that the artist, in presenting the seemingly infinite and immutable universe, is summoning our humility and demanding to know why, in the face of this majesty, we cannot achieve world peace.

The physical conservation of this work of art is also an opportunity to restore the Celestial Sphere as a symbol of international cooperation and humanity’s enduring aspiration for peace. In an era in which the international community has set forth its 2030 Sustainability Agenda, and the related 17 Sustainable Development Goals (SDGs), the Celestial Sphere and its message can be embraced not only by the UN and International Geneva, but also by the people across the globe who work and dream to make world peace a practical reality.

Robert A. Enholm is under contract to the United Nations Office at Geneva and has served as a Global Fellow at the Woodrow Wilson International Center for Scholars and as Executive Director of the President Woodrow Wilson House museum,  a site of the National Trust for Historic Preservation in Washington, D.C. The opinions expressed in this article are his own.