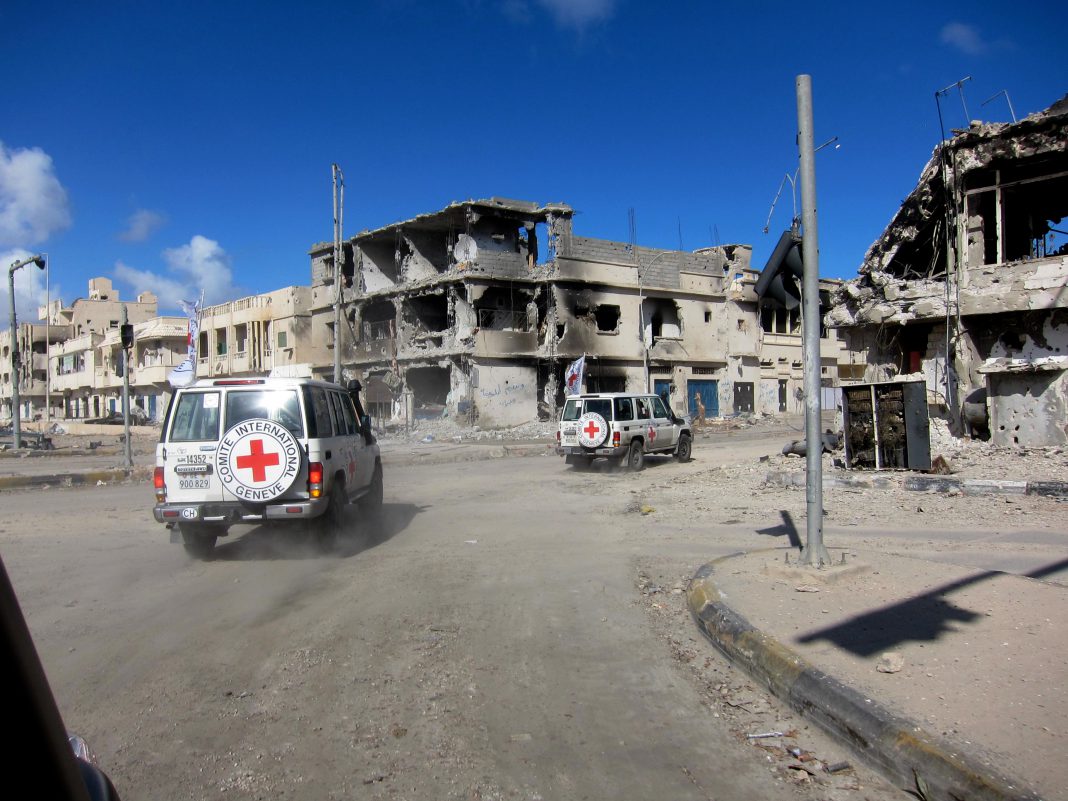 GG: Could you give us the backstory as to how you came into crisis management?

DH: I’m a logistician by profession. Out of university, armed with a Masters in Transport I started my professional life moving lettuce, burgers and perishables around London with a large fleet of trucks working triple shifts. This was the early days of time critical logistics. Every day something would go wrong and I quickly learned to think on my feet. One day my boss asked me if I might like to go to Angola – as the Red Cross were looking for specialist logisticians. It wasn’t really a question, more an instruction. One week later I found myself spiralling down to Huambo in an unpressurised ICRC Twin Otter. This was how I became one of the early logistics professionals in the humanitarian business.  Working in complex emergencies got into my system and has remained ever since – it’s a bit like malaria. Since that first mission I’ve been involved directly or indirectly in most major international emergencies whether with the Red Cross or various governments.

GG: After 15 years at the ICRC you’ve no doubt seen a spectrum of risks, crises beyond the ordinary, where indeed lives are at risk.

DH: Given the ICRC is usually on the frontlines, armed attacks, kidnap, and armed checkpoints do come up. A lot of incidents happen when you’re on the move, in transport, so you have to identify where you’re most vulnerable and then seek to mitigate risks around that – without resorting to armed guards. But the main risks in the relief sector are generally more safety related, such as bad driving or catching a disease. This is fed by a general lack of awareness. I had a good colleague, a friend, with extensive field experience, who was killed by a huge swarm of bees in Sudan. So the unpredictable, almost Biblical type events are out there.

“Working in complex emergencies got into my system…
it’s a bit like malaria.” – David Horobin

GG: One of the aims of risk management in conflict environments is improving the working culture, to instil a sense of good behaviour. Is spreading that message across the workforce, getting everyone to comply, is that a challenge?

DH: That’s a good point. The ICRC is justifiably proud of its security culture. But developing and maintaining a security culture at the individual level, and collective level, takes time, takes effort, takes training-and can easily be lost. It is something that is passed through experience, exposure and good management. You don’t learn about developing a security culture from a book. It is part of the DNA of an organisation. Airlines, oil and gas companies will each have their own type of security or safety culture. Issues around behaviour, comportment, compliance, how you talk to people, how you engage with people – whether at a checkpoint, speaking to a soldier or to a victim of armed conflict – is very important. That will affect your security and potentially their security.

GG: One of the aims of your courses at the GCSP is to take people out of their existing operational culture, place them in a different context, to see a new dimension for resolving crisis situations. If you can’t learn security culture by reading a book, what can you gain from a 2-day course?

DH: The GCSP executive education series is about improving individual and organisational resilience in crisis situations. In today’s world, there’s a spectrum of threats ranging from cyber and pandemics to armed attacks. We have seen glaring examples of this in Europe over the past few months. In the current geopolitical context, hugely disruptive events can happen anywhere in the world. Our focus at GSCP is showing how organisations can respond to such events – we look at the anatomy of crises, how they develop and how to organise and make good decisions under abnormal conditions. Managing a major event badly not only has an effect on your staff’s welfare but can also have an impact on your organisation’s reputation and its bottom line. When risks to large corporations are headline news – should you wheel out the CEO to face the cameras and the families, if he or she does not know what is going on and has no training?

GG: This cost of failure at the corporate level also occurs at the national level – when governments fail to anticipate humanitarian needs on the ground in times of emergency. One recalls Katrina in 2005 and more recently Hurricane Irma in the Caribbean.

DH: I was posted to Washington DC during Hurricane Katrina as the high level coordinator for the European Commission, this was whilst I was working for DFiD in UK- it was a memorable mission. Whilst every situation is different, during Katrina more than 1’500 people lost their lives, this has not been the case in the Caribbean this year despite more and bigger events. The investment in improving resilience at the population level has shown significant progress in the region since 2005. This means more shelters, higher construction standards, improved zonal planning. All of these factors save lives. FEMA was radically changed after the lessons-learned from Katrina, and was far more proactive this year in informing and communicating with the local population and the evacuation planning. There is also far better technology so that tracks can be plotted and specific contingencies made- but nature remains highly unpredictable.

GG: This type of mobilisation from the US was not necessarily applied in the European response, which has been roundly criticised.

DH: The UK government has well equipped navy vessels prepositioned in the region ahead of each hurricane season. They are there to spearhead the initial UK response. But of course it takes time for the resources to get where they’re needed- the logistical constraints can be significant. In these days of instant gratification we quickly ignore the sheer time involved to move from A to B to C when there are damaged roads, no power and collapsed infrastructure. Another factor is the communications networks. Several islands in the Caribbean had been incommunicado for days, nobody knew what was going on. Everybody relies on their mobile phones and the GSM network today, but in major disasters these systems can be knocked out very quickly – the same problem can apply in conflict contexts, but this may also be due to the authorities deliberately shutting down communications systems and is a highly effective tactic in terms of disempowering the population.

GG: With issues of preparedness, resilience, and foresight, there is also the challenge of decision-making, or the culture of decision-making. Tell us about your experience during the Japan Eastern Earthquake, and then the Fukushima reactor meltdown.

DH: If we look at crisis management from the lens of Western dominated International Geneva, it is about having a crisis management team and processes for rapidly making decisions, with each team member assigned tasks. This is the norm here – but this may not be the norm elsewhere where critical decisions may be made in a different style, this is what I call “decision-making by atmosphere”, which is not overtly dictatorial at all, but based more on a culture of respect for elders or hierarchical position irrespective of competence or a desire for consensus. Sometimes the tactical detail of crisis planning is made over tea late at night, by those having the authority to make those decisions.

GG: Would you say decision-making by atmosphere was an inhibitor to effective crisis response to the Fukushima event?

DH: It was certainly unusual, and would seem so for many Westerners who have not spent any time in Japan. That said that the capacity of the Japanese authorities to respond to the impact of a massive earthquake, a tsunami, and then a major nuclear event, was absolutely remarkable – and nothing like I’ve ever seen in my life. Had any other country had to cope with this triple whammy, there would have been massive civil unrest.

GG: Corporations are perhaps the opposite example, bringing both hierarchical decision-making and rapid mobility to meet the challenge of global threats. What are some of the blind spots in crisis management that upturn best-laid plans?

“Training together as a team, understanding how to work as a team, is essential.” – David Horobin

DH: From experience, over a number of years dealing with many forms of crisis – security, operational, reputational – one issue is fundamental. Training together as a team, understanding how to work as a team, is essential. I do not believe in today’s world that a major crisis can be handled by one individual. Certainly not given the speed at which things happen and are reported. There are too many complex tasks that need to be handled by people with the competence to fulfil those tasks. You will have gaps in information, you will have pieces you don’t know, and you have to understand how to make good decisions based on incomplete information.

GG: When organisations delegate crisis management externally, to private military contractors or crisis responders, is this constructive, having others solve problems for us?

DH: Given certain contexts and organisational structures, that may be appropriate. Not managing a crisis correctly can wipe out a company or have such a negative impact on staff that they leave. However I don’t think leaders can fully abrogate their responsibility. These days employees and families will scrutinise who is leading crisis response and what competences and experience they have. Get it wrong and you can be sued.

GG: Central to your coursework is helping people make better decisions. Doing that requires them knowing each other and how communication works within a team. In crisis situations, where is it that teamwork breaks down the most?

DH: Firstly, there is the question: “Are we in a crisis?” Who in the organisation is going to push the alarm button that says, “We’re now in a crisis – and therefore need to activate our crisis plan.” Who makes that decision is not always clear. Companies can have good plans yet remain unsure who is going to activate the crisis response. Secondly, it is imperative that executives make good decisions. How they make decisions – and ensuring people around the table understand how they make decisions – this is essential. Some executives are extremely good leaders, but are not used to situations where they are missing information. Their style may be to rely on intuition, but in a crisis this may not always be appropriate. In the GCSP course we explore the psychology of bias in decision making, balancing intuition with analysis, and enhancing the skills of the individual and the collective.

“Companies can have good plans yet remain unsure who is going to activate the crisis response.” – David Horobin

GG: Poor stress management can also lead to poor decision-making, which is where simulation training can be extremely valuable.

DH: Crisis management is not about coping with your daily work at 300 mph. At GCSP we pull our course participants outside the realm of the familiar, adding different forms of stress as the simulation unfolds. Stress has its positives and negatives. In a crisis situation you’ve got multiple elements: dealing with the media, dealing with families, with business continuity, with reputational risk. Crisis teams need to understand and recognize the signs of stress – and the impact it can have on decision-making. Our real-time simulation training is a way to explore and learn at the group level, to improve skills and resilience in times of crisis.

David Horobin is course director for the GCSP’s Crisis Management: Navigating the Storm

Inger Andersen: “No one can go it alone on sustainable development.”