Patagonia, once a railway whistle stop for miners and ranchers on a shady creek near the Mexican border, is now timeout territory for dropouts, diehards and deep thinkers who listen to different drums. It says much about what’s going wrong – and what isn’t – in America.

That marshal ordered young Hilde Lysiak to stop tailing him on her bike. She said she was on a story. He replied that she was just a kid and in any case was obliged to obey a police order. She stood her ground.

In her print and online monthly Orange Street News, Hilde quoted the marshal as saying, “I don’t want to hear about any of that freedom of the press stuff…I’m going to have you arrested and thrown in juvey.” He let her go with a warning not to circulate her video of the encounter.

She immediately published the video. (See video of discussion between Hilde Lysiak and the marshal). The Town Council apologized profusely for what it called a First Amendment violation. “We are sorry, Hilde,” the mayor said in a long statement about citizens’ rights. “We encourage and respect your continued aspirations…”

Score one for the good guys. But a free regional monthly and Hilde’s paper, which is heavy on stabbings and shoplifting, are it for news. Some of Patagonia’s 1,000 residents read voraciously online. Others own no TV and pay little attention to the world beyond their happy valley.

Townsfolk, a little more blue than red, can be evasive when asked where they stand. Arguing politics tends to foul the air in a tightknit community. But as in all small towns, there are notable fixtures like Charlie Montoy, happy to speak his mind with all comers. 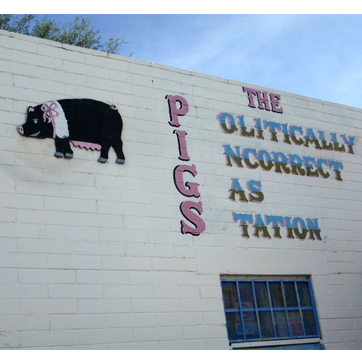 Montoy’s garage is emblazoned with neatly painted letters, PIGS, for politically incorrect gas station. “Yes, I’m for Trump,” he said. “He’s a businessman. I spent thirty years here, working every day. These liberal fuckers want something for nothing.”

PIGS throbs with customers and gossiping visitors. Some share his view that a border wall is needed to keep out freeloaders; others don’t argue. Conversation is often in rapid-fire border Spanish, and Montoy’s surname has deep roots in Spain. But he dismisses questions about his family history. “Never mind the past,” he said. “Look forward.”

I asked if he was concerned by Trump’s strong-arm phone call to Ukraine or his betrayal in Kurdistan that energized ISIS. Montoy made a sound like air escaping a tire. “I don’t pay any attention to that stuff,” he said. “Too far way. It doesn’t concern me at all.”

Then what about Rosemont? Hudbay Minerals of Canada is battling a lawsuit by Indian tribes and environmentalists to block plans for a $1.9 billion copper mine that would gouge a vast open pit in the Santa Rita mountains just to the north. “That’s Sonoita’s problem,” he said. “Nothing to do with us.” Sonoita is a highway-junction settlement 12 miles away.

At the annual town fair nearby, kids romped with dogs while parents lined up for sizzling burgers. Talk ranged to local scandal and baseball. Volunteers at one booth outlined in grim detail how Rosemont and other planned mines would devastate wilderness, water supply, sacred tribal sites and endangered fauna and flora. Only those predisposed to listen stopped by.

Patagonia reflects a big picture. With countless fragmented sources of dubious information, rural communities across America seem increasingly less guided by actual facts on vital issues beyond their line of sight. And fiercely held opinions are reinforced in an echo chamber.

This trend goes beyond backcountry small towns. Only 8.1 million households bothered to watch a field of Democrats debate on CNN this week. Baseball playoffs play-offs attracted 5.9 million. The highest rating – at 10.6 million – was for NCIS, yet another crime series.

Hilde’s father, Matthew Lysiak, knows a lot about this. After a decade at the New York Daily News, he settled in Patagonia with his four kids to write books. “A lot of people here decide what they think, and they don’t go much deeper,” he told me.

He is proud of Hilde and helps all he can, but he said with a rueful laugh that she operates on her own. “I tell her, ‘Look, I covered crime for ten years, let me help,’ but if I have a suggestion for a story it has to come from somebody else, or she might just dismiss it.”

Hilde is doing something right. She started the Orange Street News at age 9 in Selinsgrove, Pennsylvania. Paid print subscribers swell her college fund, and the free online edition racks up a million views a year. Her six-book series, “Hilde Cracks the Case,” brought a new book deal, and Apple is producing a TV mystery series based on her life.

In September, the University of Arizona Journalism School gave its John Peter Zenger Award to Christiane Amanpour and added a new category, a junior Zenger, for Hilde.

I spoke briefly with her and saw what her father meant. Puffed up with self-importance, I was prepared to regale her with the ancient wisdom we old crocs bestow on newcomers to our craft. After a few pleasantries, she politely suppressed a yawn and went off to chase a story.

It’s a new world – in journalism and just about every other endeavor – and I’ll read about it in Matthew Lysiak’s new book, out in spring: The Drudge Revolution: The Untold Story of How Talk Radio, Fox News, and a Gift Shop Clerk with an Internet Connection Took Down the Mainstream Media.

Mort Rosenblum, who lives between France and the United States, is an author and former Senior Correspondent of the Associated Press. The Mort Report is – as Rosenblum describes it – “a labor of love by old-style correspondents with lifetimes on the road and young ones with fresh eyes. Our philosophy is simple: we report at first hand with analysis based on non-alternative fact, not opinion.  If we get something wrong, we fix it.”