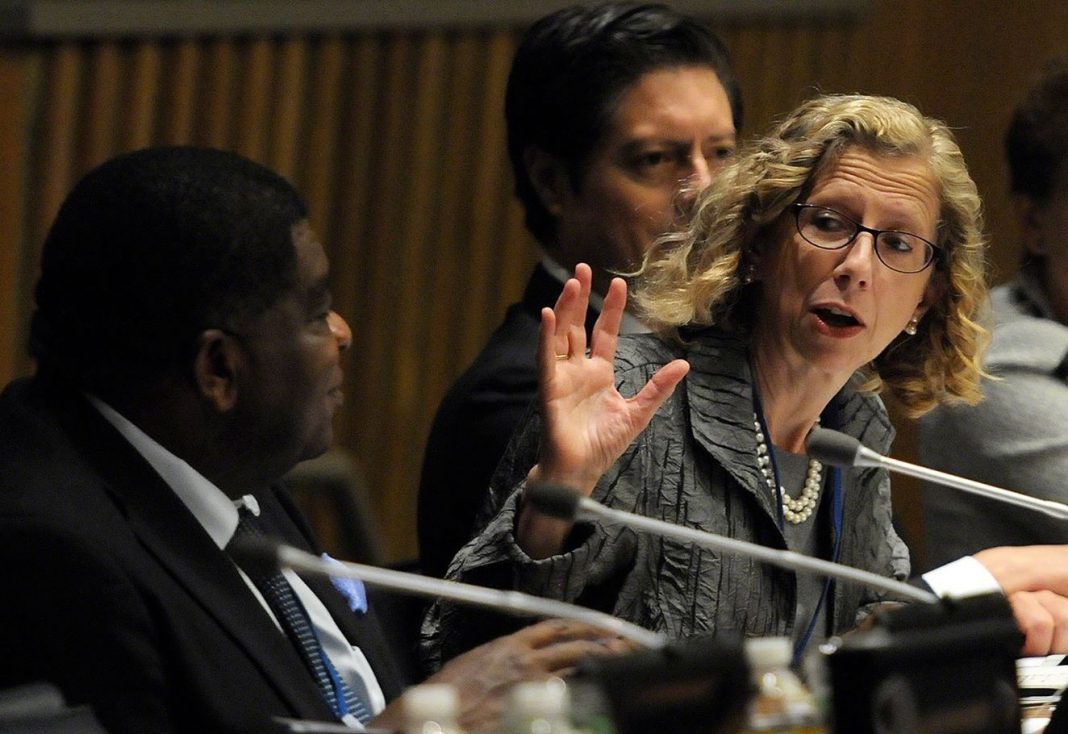 “NATURE CONSERVATION USED TO BE CONSIDERED – perhaps – a stand-alone issue, but today we can simply no longer think this way,” Inger Andersen told me. Her glass and steel office, on the outskirts of Gland along the lake road from Geneva to Lausanne, matches her conviction. It is deliberately designed as an environmentally sensitive and energy-efficient model structure. The IUCN HQ includes its own wild garden and pond with local species chosen for their importance to the Vaud ecosystem, bringing a welcome touch of nature to the apartment blocks around. It also offers eco-friendly meeting facilities for local businesses.

“Time is running out,” she warned. “Protecting nature is not in competition with any of the SDGs. They all have to be dealt with together and globally on a country-by-country basis. No one can afford to go it alone.”

The Danish Director-General, who in January 2015 assumed the reins of the world’s largest grouping of conservationists, also sees IUCN as very much part of the International Geneva – or Switzerland – community. Responsible for harnessing the know-how and resources of over 1,300 member organizations including NGOs, governments, UN agencies, scientific institutions, indigenous peoples and business associations, Andersen stressed the importance of tapping the expertise of some 10,000 experts world-wide. She herself is a water, drought and desertification specialist (See Water and Peace, Made in Switzerland).

IUCN has six different commissions focusing on themes such as species survival, environmental law, social and economic policy, education and communication. Its members and officials regularly take part in national, regional and international meetings and discussions dealing with subjects ranging from cultural heritage to sustainable water. Andersen further pointed out that “it is absolutely vital to take stock of what nature has to offer. This means recognizing the importance of natural resources and using them carefully in a manner that will safeguard the world’s future. “

While this is what IUCN does best, valuing and conserving nature can also benefit all that the SDGs stand for: tackling climate change, reducing poverty, improving food security and access to health…And even why people are seeking to migrate from countries where they feel they have no future. The list is long.”

FROM RENOWNED ORNITHOLOGISTS AND THE SWEARING PRINCE TO  SOCIETY-FOCUSED SCIENCE

IUCN, which was established in 1948 in Fontainebleau, France, with headquarters in Brussels, has come a long way in close to 70 years. In the 1960s and 70s it operated little more than a modest secretariat based in a 1920s villa in Morges further up the lake. Even then the organization had regular visits from leading conservationists from around the world such as Peter Scott, Niko Tinbergen, Armand Denis, Gerald Durrell (See article in this issue by Keith Somerville), Luc Hoffmann (See In Memoriam article by Liz Kemf), Peter Jackson and George Schaller. They would hold chats over tea for the 30-odd staff in the villa’s living room or in the garden. Even Prince Philip, the Duke of Edinburgh, could be heard swearing good-humouredly if not vividly in the front reception area during one of his visits.

Faced with steady expansion – by 1978 IUCN was running 137 projects largely in Africa, Asia and other parts of the developing world – it moved to Gland together with the international office of the WWF (World Wildlife Fund/Worldwide Fund for Nature) in 1981. To the chagrin of many in Morges – the town council failed to grasp the importance of conservation as a growing global concern – Gland was willing to offer an attractive deal. IUCN now has a world-wide staff of almost 1,000 people working in some 50 different countries, helping to put the Lake Geneva town firmly on the international conservation map.

NATURE IS PART OF THE OVERALL EQUATION

For Andersen, who deliberately travels from her home in Geneva to her office by public transport, climate change is a particularly crucial issue. And not just because it has become an ‘in’ concern for all outside Trumpland. “We’ve always been dealing with climate change, even if not intentionally at first, because nature is very much part of the overall equation. Oceans, forests, soil…” Healthy soil, for example, mitigates climate, makes food production more resilient and reduces the risk of drought and flood. The restitution of forests, or putting them back into ‘working order’, impacts agriculture, water resources and the way we live. Forest landscape restoration not only reduces carbon releases. It also provides jobs and increases biodiversity.

The Bonn Challenge launched by IUCN and Germany in 2011, aims to restore 350 million ha of forests by 2030 with worldwide projects ranging from Southern Europe to Africa and Southeast Asia. Most of these landscapes are currently degraded but are being gradually brought back to use, taking the pressure off pristine areas.

THE EARTH IS LOSING SPECIES: ON AVERAGE 1,000 TIMES THE NATURAL EXTINCTION RATE

“We’re working on ensuring nature’s viability, because if we don’t do this, there is no future for our planet. It’s important to understand that everything is interlinked nature and healthy ecosystems can help to adapt and respond to today’s challenges,” Andersen said. Given the current deterioration of biodiversity, the planet is – on average – losing species at 1,000 times the natural extinction rate, a veritable slippery slope. “To halt this hurtling decline, we must look at conservation in the broader context of human welfare,” she added.

Ecosystem collapse and loss of its services are often the first step toward societal breakdown, Andersen, a British-educated economic development specialist, noted. For this reason, ensuring viable ecosystems, including combatting the extinction of species are  critical for our self-preservation. The IUCN Red List with its roughly 86,000 assessments of species, for example, spells out to what degree they are threatened around the world, plus what is driving them to extinction. “The Red List is like a barometer of life,” she said. “And its diagnoses are necessary for any discussion on how to tackle the current extinction crisis.”

Andersen sees a number of factors as imperative for achieving sustainable development. One is for IUCN to invest in its members. “All of them represent nature-based solutions that we need to make use of,” she stressed. “It’s extremely important to understand the dynamics of nature, so one of our roles is to engage with science. This in turn helps us invest more knowledgeably in nature conservation.” Like forests, healthy oceans can absorb carbon, but they also serve other purposes. However, to cultivate healthy oceans, we must also re-build mangrove forests along coastal areas, given that they not only serve as protective breeding grounds for fish and other marine  species, but can protect against hurricanes and water surges, such as tsunamis.

GOOD JOURNALISM AND EDUCATION ARE KEY

Another critical factor is effective stimulation to action. From IUCN’s point of view, it is clear what is possible to achieve through nature conservation. As Andersen argued, it’s all about convincing people of what is needed, and why. For example, one can explain that restoring 350 million hectares of degraded land can sequester the equivalent to the average yearly CO2 emissions of over 350 million cars in the U.S. Or that more productive soils can boost security for millions around the world.

“But you still have to ensure that people understand,” she said. “So it’s all about stories which put across the message of how and why we should invest in nature in order to restore our planet. I consider good journalism a highly important partner in this approach. Journalism needs to inspire people through stories that show what is happening. And only then can we really start speaking about a fairer and more sustainable world.”

Part of this approach, particularly now that donor governments are cutting back on financial support, is to work with businesses. Andersen does not see IUCN as vying for support with other organizations, such as UNHCR or UNICEF, which, for some observers, place a heavy emphasis on fund-raising. Instead, she noted, it is “part of the global effort to find solutions and to take action. It is also clear that we need to get industry, the private sector, on board, and not just for funding,” Andersen explained. Businesses across sectors need to embrace more sustainable practises, through specific guidelines that will enable them to operate profitably while minimizing their impact on biodiversity.

At the same time, IUCN welcomes the involvement of companies such as Toyota, which last year expanded its support for  the IUCN Red List of Threatened Species for the additional collection of data of 28,000 species, including many that represent key food sources for much of the world’s population.

Equally vital for education, but also media as part of its public outreach responsibilities, Andersen believes, is getting young people involved. This means getting into schools, an approach that IUCN seeks to support. “If we don’t get young people on board, we won’t succeed in achieving a sustainable future. Luckily, a lot of young people I meet understand this and recognize that it is their future at stake. It is important to continue working in this direction.”

Edward Girardet is editor of Global Geneva magazine. During the late 1960s and 70s, his businessman father worked as an unpaid volunteer and financial executive for IUCN in Morges. As a foreign correspondent, the son has always sought to incorporate conservation and environment concerns in his coverage of wars and humanitarian crises around the world.

David Horobin: “In today’s world a major crisis cannot be handled by one individual.”