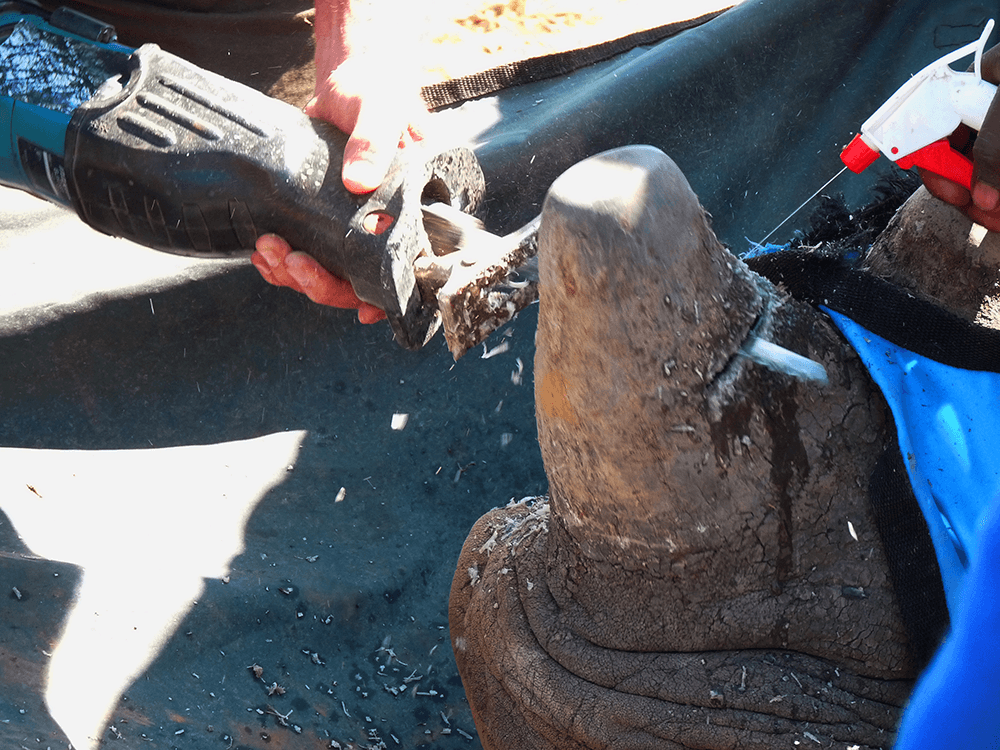 The air buzzed with the sound of an electric saw. Next to me a 2,000kg white rhino slumped on the ground.  When the saw fell silent, I was handed a heavy, greyish brown lump of horn.  “That’s worth about $40,000 in Vietnam”, I was told. Poached rhino horn can now fetch as much as $65,000 per kg. By weight it is more valuable than gold or cocaine. The high price and massive demand in Vietnam and China have fuelled a poaching epidemic that has swept southern Africa. About 1,300-1,500 rhinos are killed each year for their horns – over 6,000 since 2009.

But I was not holding poached horn and the huge male white rhino next to me was not dead.  I had just witnessed the painless dehorning of a rhino on the huge farm of South Africa’s leading private rhino owner, John Hume.  The rhino had been darted to sedate it, held down by four strong men, and blindfolded to avoid stress. Then its two horns were cut to within a couple of inches of their base. It took just ten minutes from darting for the rhino to climb back slightly unsteadily to its feet and shamble off into the veldt.
John Hume has 1,446 rhinos on his 8,000ha ranch near Klerksdorp in South Africa.  The latest addition was a male calf born there on 28 December 2016.  This was the 1,000th rhino bred from animals owned by Hume over a period of 25 years. South Africa’s total population is around 20,600 but it has been hit hard by years of heavy poaching in Kruger National Park, Hluhluwe-Imfolozi Park in KwaZulu-Natal and on private reserves and game farms.

Increased security, tougher sentencing of poachers and improved intelligence and the creation of high intensity protection zones in Kruger are working to reduce poaching there and to slightly cut the overall level of poaching in South Africa.  In 2014, 1,215 rhinos were killed for their horns in South Africa. This was reduced to 1,175 in 2015 – about 65 per cent of those poached are killed in Kruger.

Kruger’s chief ranger, Nicholus Funda, told me when I met him at the Park that they hoped to keep the number killed in the park below 700, which should lower the national figure to around 1,000 (458 were killed in Kruger between January and late August).  No firm figures have been released by the South African Department of the Environment for 2016, but Albi Modise, a spokesperson for the department said on 27 December that the final number would show a reduction on previous years.  While the overall figure is likely to be slightly lower for the country as a whole, there are signs that the focus of poaching is shifting because of increased security in Kruger.

When I visited Hluhluwe-Imfolozi in September, the head of rhino security, Cedric Coetzee, told me that they were experiencing a worrying rise in poaching.  Incursions by poachers had risen from two a week to two a day in the previous 18 months. On 27 December 2016 Musa Mntambo, a spokesperson for Ezemvelo KZN Wildlife, which runs the Park, said that 159 rhino had been killed in the province during the year compared with 97 in 2015. Hluhluwe-Imfolozi had borne the brunt of the increase.

Any minor advance in South Africa is being offset by increased rhino poaching. In Zimbabwe and Namibia, which also hold significant proportions of the 20,378 white rhino and 5,250 black rhino remaining in Africa, according to Save the Rhino and to the South African conservationist John Hanks. The numbers poached in Namibia have risen in recent years, reaching 80 in 2015 having been down at 25 the year before; 2016’s death toll has not been released. Zimbabwe lost 50 rhinos in 2015, double the previous year’s level.

Why is rhino horn so expensive and so much in demand?  It has been utilised in Chinese traditional medicine for millennia and is also used to carve cups, libation vessels and other artefacts popular with China’s prosperous elite. But the booming market is in Vietnam among wealthy businessmen.  They give horns as gifts to wealthy clients or prospective business partners, and serve it in wine at banquets.  Many Vietnamese believe it is a cure for hangovers and cancer – though there is no evidence to support either claim.  It is a luxury commodity that reeks of wealth and power.  Demand has risen rapidly over the last ten years and shows no sign of abating.

International trade in rhino horn has been banned since 1977, when CITES (The Convention on Trade in Endangered Species) voted to ban all export-import trade in rhino horn to conserve dwindling wild rhino populations in Africa and Asia; South Africa, due to breeding successes, has been allowed by CITES to export live white rhino in certain cericumstances, such as restocking parks elsewhere..  This did not mean that domestic trade was banned in all countries but it did attempt to stop horn being exported from Africa – where rhino numbers were decimated in the 1970s and 1980s.  But increasing prosperity in the major markets for horn in the Far East has caused a horrific rise in poaching.  (See March 2017 Guardian article in Focus on Wildlife) This is despite that fact that rhino horn is basically compacted hair (keratin) – with no medicinal properties and without even the aesthetic appeal of ivory.

Despite this, demand is high and the ban is not stopping poaching. High security in key national parks, shoot-to-kill policies and attempts to uncover the criminal syndicates that thrive on the high price of horn have only limited effect and appear to be shifting the focus of poaching rather than seriously reducing it. Most wildlife and conservation NGOs rigidly oppose any suggestion of a legal trade to meet demand and so reduce the appeal of poached ivory.

Speaking at a debate with private rhino breeder John Hume at the Royal Institution in London in August 2016, Will Travers of the Born Free Foundation spoke for many NGOs when he expressed total and absolute opposition to any legal trade. Hume countered with an argument in favour of trade in horn from dehorning rhinos and natural mortality, that would not involve harming rhinos.

As I witnessed on Hume’s ranch, dehorning is painless and does no harm to the animal.  Rhinos can be dehorned every 18 months, producing about 0.5-1 kilo of rhino each time.  Currently, such horn and horn from natural mortality is collected by private owners who dehorn and by national parks and kept it is under tight security. It cannot be sold or traded. South Africa, which has more rhinos than any other country but also the worst poaching problem, banned domestic sales in 2009.  Hume is fighting a court case to overturn that. He wants the right to trade in rhino horn to bring in funds for rhino conservation, anti-poaching and also for community projects.

Proponents of trade in horn argue that dehorning rhinos protects them from poachers and could, if a legal, regulated trade was sanctioned by CITES, provide substantial funds for conservation of rhino and their habitats, more sophisticated anti-poaching techniques and funds for rural development to make rhinos an asset for rural populations (whose poverty is often a driver for recruiting local men as poachers). In September 2016, CITES voted down a request by Swaziland for a limited legal trade in natural mortality horn from its small population of rhino, so the pro-trade lobby has a fight on its hands in trying to get CITES agreement for a trade in horn.

Both black rhino (CITES appendix 1 listing) and white rhino (appendix 2 listing) are listed by CITES in categories that do not permit trade in horn or other products (with the exception for live South African white rhino already noted). On 8 February, 2017, following earlier court and appeal court decisions lifting the moratorium on domestic trade in rhino horn, the South African Environment Minister published draft regulations for the domestic trade in legally acquired  rhino horn, which would also allow the export for “personal” rather than commercial purposes of two rhino horns by persons holding the necessary South African permits and import permits from the country to which they would go. It remains to be seen if this will be fully adopted and how it will affect the poaching epidemic in the country and how CITES will react.

David Cook (formerly director of the Natal Parks Board, and Hluhluwe-Imfolozi senior ranger), believes poaching isn’t declining, it is just shifting location and developing new strategies. In the 1960s, Cook worked closely with renowned conservationist Ian Player to save the Hluhluwe-Imfolozi s white rhino, the last in the region. This operation was responsible for the survival of the white rhino in southern Africa and the enabled the restocking of southern African parks, conservancies and private game reserves. Cook told me that a regulated trade to meet demand legally at a fixed price below the current level and without risk of prosecution for retailers or buyers should be part of a cocktail of measures to further the conservation of rhinos.

While I understand the position of the conservation NGOs and their desire for an ultra-ethical stance on trade in wildlife products, there is an equally strong and ethically-based argument that regulated, non-lethal trade in horn could reduce poaching. It will never totally stop it but could reduce it to a level where rhino numbers increase and funds from legal sales produce a sustainable form of conservation that benefits rhinos and local communities through income from rhino horn. It is Benthamite utilitarianism against a Kantian categorical imperative. The argument by anti-trade that a legalised trade would encourage demand is a strong one, but only if one ignores that there is already considerable demand and rhino numbers are falling fast and consistently. Demand reduction is not working, so a legal trade won’t worsen the situation, it might just reduce poaching sufficiently so that numbers recover rather than keep falling. Trade in non-mortality rhino horn could reduce poaching, though I have no illusions it would stop it completely. Misplaced altruism will not save the rhino. Regulated sustainable-use strategies could.

Professor Keith Somerville teaches at the Centre for Journalism at the University of Kent, is a Senior Research Fellow at the Institute of Commonwealth Studies (University of London) and is the author of Ivory: Power and Poaching in Africa (Hurst and Co, November 2016) and Africa’s Long Road Since Independence (Penguin, January 2016).