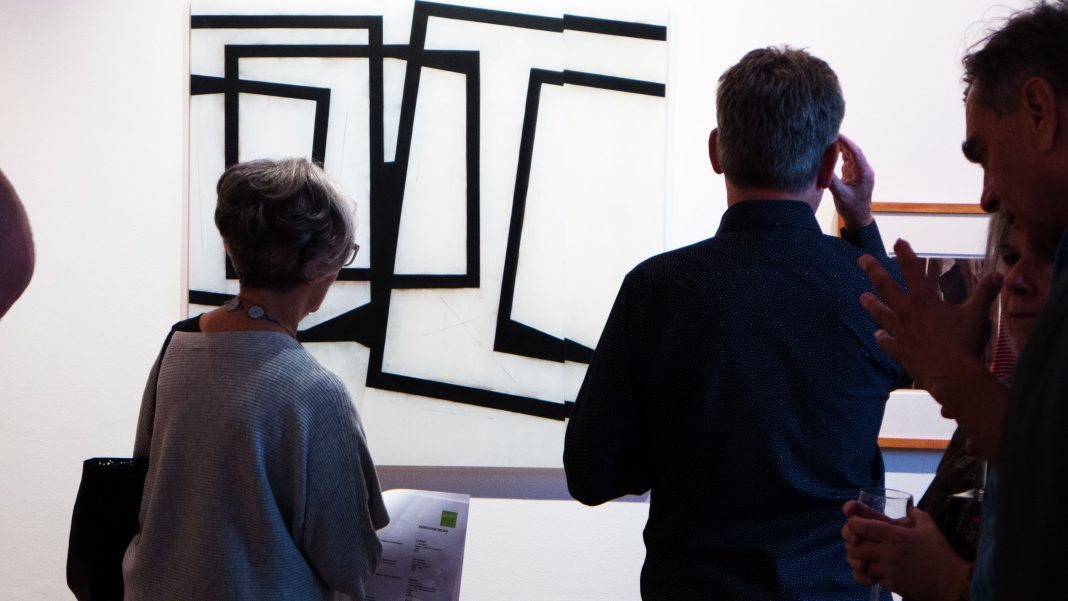 CHRISTINE PFISTER WAS MANAGING THE ZERMATT office for a family-owned company building prefabri cated mountain chalets, when she decided that it was time to take a six-month sabbatical and travel around the United States to study English. “I guess that I spent more time traveling than studying,” she says.

Today, Pfister is Switzerland’s honorary consul in Philadelphia and the director of Pentimenti, one of the city’s most respected galleries focusing on emerging contemporary art. Her clients range from local art fanatics to collectors in Switzerland, Paris and the Middle East to the far flung reaches of the planet. She has done a number of exchange programs with museums and galleries in Switzerland, and she is a leading presence in some of America’s most important contemporary art fairs. Her next project is the upcoming Art Fair in Abu Dhabi, which will coincide with the opening of the Louvre’s satellite museum in the emirate.

Roughly half her artists are local. The other half are from distant locations ranging from Iran and Tel Aviv to South America. “One of my collectors lives in Kuwait,” she explains. “I have never met him in person, but his brother, who lives in Houston, Texas, came through Philadelphia and was fascinated by one of my artists. When his brother in Kuwait came to visit in Houston, he saw the work and became just as passionate about it. I’ve now sold him several pieces.”

Pfister’s career and her success at a time when many art galleries are threatened with closing, happened almost by chance. She had been going to school in San Francisco and traveled around most of the Western United States, including Hawaii, when a friend suggested taking a trip to Philadelphia. The friend wanted her to meet another Swiss friend, Tom Pfister, who was engaged in marketing for the leading German software company, SAP, which at the time had a headquarters in Switzerland.

A CRASH COURSE IN MODERN AND CONTEMPORARY ART

SAP had only one American client, but it was a big one: the multinational science and engineering giant, DuPont. DuPont demanded that if SAP wanted its business, it would have to post someone to the US to meet its needs.

Tom Pfister had signed on for a three-year tour in 1991. It turned out that Pfister had interests that went beyond business. While studying marketing in Geneva, he had developed a passion for art and enrolled in night classes to study drawing and painting. Landing in Philadelphia, with only one client, he had an urge to expand his horizons. A friend, who had studied at the auction house Christies, suggested that he take over a vacant storefront in Philadelphia’s Old City, and open a gallery. It would be a great way of inserting himself into the creative community.

After Tom and Christine met in 1992, they engaged in a long-distance courtship and were finally married in 1995. By then, Tom’s business demands had become too overwhelming to continue running the gallery himself.

Tom suggested that Christine could either look for a job on her own, or, an option would be to take over the gallery. “I didn’t know if it was what I really wanted,” she says, “So I decided to do it in stages. I started by spending several weeks watching the director. I went along on visits to artists’ studios and paid attention to how the gallery’s director made decisions and how she related to collectors. In the end, I decided that it was an amazing environment, but I realized that I needed to have an education in art.”

She took a crash course on modern and contemporary art at Christies in New York, which meant a daily hour-and-a-half commute by train. “I wanted to know how to look at art,” she says. Studying at Christies also provided a chance to be in direct contact with the work that private collectors were putting up for auction. More important, it offered a chance to meet collectors and to understand the psychology behind their obsession with art.

When she finally took over Pentimenti, she had a broad vision of the latest trends in new and emerging art. The focus became more specific as she gathered experience. She was particularly interested in emerging artists. “When you go to Art Basel, which is the major reason that Art fairs are so successful,” she says, “you see artists who are already established in their careers. What I am interested in is the artists who have not yet reached that point. I enjoy working with the artists, and at times helping them to go ahead with a project that they might not have finished because they didn’t have the financing or enough support.”

Christine says that the qualities she looks for in an artist are passion and consistency in developing an idea or concept. “I care very much about passion,” she says, “and the craftsmanship of the artist.”

The major art market remains New York, but Christine sees advantages to being in Philadelphia which is rapidly regaining its former allure. “By not being in New York, I miss out on art tourism,” she says. “but that is not really important when collectors know who you are. When they are interested in an artist, they will take the time to find you.” In fact, New York is only two hours away, and a growing number of artists are leaving New York for Philadelphia where rents are less expensive and daily life is less stressful.

THE INTERNET HAS BROADENED THE ART VIEW OF THE WORLD

When Christine first began running Pentimenti on her own, she found that organizing exhibitions was a slow, labor intensive process. “Most artists did not have websites,” she explains. Art work had to be photographed on slides and projected on a wall. She had to design, print and send invitations to new openings by mail. In just five years, everything exploded and with the internet the business moves at light speed. Today, if a collector in another country wants to see an artist’s latest work, a sample image can immediately be sent by email. “The internet has broadened everyone’s view of the world,” Christine says.

The key element in the equation is that the collector trusts the judgment of the gallery owner. “It really doesn’t matter where you are based these days,” she says. “What does matter is confidence that collectors have in the gallery.”

Tom Pfister originally had a three-year visa to work in the US. When the time was up, SAP asked him to stay, enabling him to secure him a resident Green Card. He eventually left SAP to start his own international marketing company, Match Code, and only recently started a second company, Nitro Marketing. In 2011, the Swiss government asked Christine Pfister to become its honorary consul in Philadelphia. She subsequently joined the board of directors of the Consular Corps, which represents the honorary consuls of 35 countries in the city that served as America’s original capital. She recently resigned from those duties in order to have more time to spend on other projects.

As honorary consul she has increasingly focused on creating links between Swiss and American business. Switzerland is currently the sixth most important investor in the state of Pennsylvania, and Swiss companies account for more than 27,000 jobs. As for the Pentimenti Gallery, it recently celebrated its 25th anniversary. “Last year was our best year ever,” Christine says, “and the first half of this year has already surpassed last year. It keeps getting better and better.”

A former foreign correspondent based in Europe, including Geneva, Africa and Asia, William Dowell is Global Geneva’s America editor based in Philadelphia.

Leave a Reply to IRAN-USA: The Sound and the Fury – An outrage too far? | Global Geneva Cancel reply