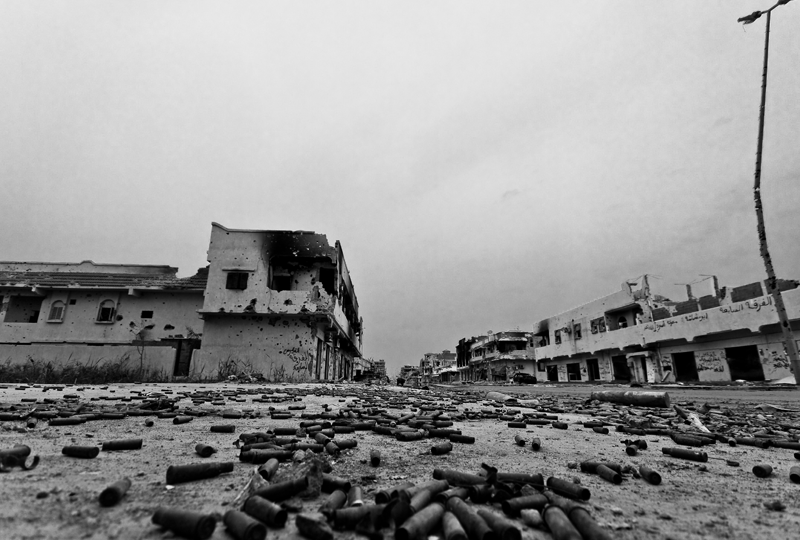 Five years ago this February I was among the first foreign journalists to arrive in Benghazi, the city in eastern Libya that had just birthed the uprising that would eventually bring an end to Mummer Gaddafi’s decades long rule. I remember telling BBC radio that it felt like everyone and no one was in charge as Libya’s eastern flank threw off the shackles of Gaddafi’s regime. There was a sense of unity of purpose: locals volunteered to direct traffic and distribute food while others flocked to the frontline, their efforts later augmented by NATO-led air strikes.

It would be another eight months before everything would culminate in the capture and killing of Gaddafi at the hands of rebel forces in his hometown of Sirte, which would later – in early 2015 – become ISIL’s stronghold in Libya.

Almost immediately after Gaddafi’s demise disagreements over Libya’s transition from dictatorship to democracy set in among those who then comprised the various political and armed branches of the rebel camp. In many ways, these disputes – ranging from petty personal rivalries to conflicting visions for Libya’s future – inform the multi-faceted power struggle that sparked a civil war in 2014 and continues today.

But ordinary Libyans remained optimistic in those early days, noting that the oil-rich nation of just six million inhabitants had none of the sectarian or ethnic cleavages that plagued Syria and Iraq. Several talked of Libya becoming “another Dubai” within years. Today, however, those dreams have been dashed and Libya is more divided than at any point in its modern history. Facing economic collapse, with hundreds of thousands displaced and hundreds more killed battling Islamic State, the country’s future looks bleak.

The distance of time and the chaos that has engulfed Libya has prompted a measure of soul-searching as Libyans contemplate why their transition failed so badly. It is not unusual to hear Libyans claim they have failed their own revolution, as the country finds itself pulled in different directions by power struggles that are more about regional and tribal interests than competing ideologies.

Squabbling between the different political factions, and their allied militias, has left ordinary Libyans frustrated as they struggle with a chronic liquidity crisis (long queues outside banks are a daily occurrence, sometimes spilling over into violence), power cuts, water shortages and crumbling infrastructure. Western powers have looked on with increasing alarm as both human smugglers and ISIS took advantage of the ensuing chaos, the smugglers increasing the flow of migrants transiting through Libya en route to Europe, ISIS attempting to use Libya as a fallback base if weakened in Syria and Iraq.

To understand the current ruptures in Libya, we have to go back to two pivotal events in 2014. One was an operation launched in Benghazi that May by Khalifa Haftar, a former Gaddafi-era general who, inspired by Sisi in Egypt, had attempted a coup a few months earlier. Haftar’s operation was aimed at Islamists of all stripes
—extremists accused of assassinations, but also others, including the Muslim Brotherhood, who had participated in Libya’s democratic transition—and it triggered fighting that continues today. Egypt and the United Arab Emirates have blatantly flouted the UN arms embargo to support Haftar.

The other was a militia battle for control of Tripoli following Libya’s second post-Gaddafi parliamentary elections that June. It ended with an alliance known as the Libya Dawn, which included Islamist factions, becoming the dominant power in the capital and out of that emerged a self-declared government backed by the rump of the previous parliament, the General National Congress. The then recognised government of Prime Minister Abdullah al-Thinni fled to eastern Libya.

This meant Libya was split by two rival governments and two rival parliaments, one internationally recognized and elected – the House of Representatives based in the eastern town of Tobruk –  and the other self-declared until a pain-staking UN dialogue process culminated in the signing last December of a political agreement, from which, the UN hoped, a unity government would emerge. Complicating matters is the fact that each side remains backed by myriad armed factions, some comprised of units from the Gaddafi era military (which Gaddafi, fearful of an army coup, hollowed out), others militias that emerged during and after the 2011 uprising, and others still a mix of army and militiamen.

ISIS found opportunity in the resulting vacuum, declaring its first affiliate in the eastern town of Derna in late 2014 and steadily expanding its presence and cohort of foreign fighters until local militias started to push back following a string of deadly attacks. With ISIS now routed from Derna, fighting continues – with the help of over 140 US air strikes –  to dislodge the group from Sirte. But while ISIS (or ISIL) may be on the back foot in Libya, it was only ever a symptom and not a cause of the country’s instability. Tackling the zero sum politics driving the national power struggle that erupted in 2014 is the only path to a stable Libya.

But the UN-brokered deal is fragile; it does not have the endorsement of key actors and constituencies inside Libya and some external players continue to pay lip service to it while backing certain armed factions on the ground. The presidency council, the first layer of what is hoped to be the unity government, maintains an uneasy presence in Tripoli, surrounded by militias known for their shifting loyalties.

The agreement has not secured full approval from the Tobruk parliament either, which insists a clause related to army leadership be changed. A number of factions want Haftar – appointed commander in chief by the HoR in 2015 and recently promoted to Field Marshal – to remain in that role and will accept nothing else. But on the other side are elements adamant that Haftar be removed; they believe that his ultimate aim is a power grab. Those fears have been bolstered by Hiftar’s recent capture of several key eastern oil ports and fields. This, along with his ‘militarization’ of eastern Libya – elected mayors have been replaced by military governors and Haftar’s chief of staff has interfered in the appointment of regional managers of state bodies including the national electricity firm – confirms long-standing suspicions that Haftar sees himself as a potential Libyan Sisi. The question of what to do about Haftar could likely cause the entire political agreement to unravel.

Added to Libya’s woes is looming economic meltdown, despite its oil wealth. The country is burdened with one of the largest public payrolls in the world and massive fuel and food subsidies, all a leftover from the Gaddafi era. Due to an ill-fated decision taken after Gaddafi’s fall in late 2011, armed groups on both sides of the current power struggle are receiving state salaries from the central bank headquartered in Tripoli. The instability of recent years has cut oil production to a fraction of the 1.6 million barrels per day Libya had been pumping before Gaddafi’s overthrow. With global oil prices plummeting, Libya’s central bank has been forced to eat into its foreign reserves to cover the budget, and foreign diplomats have warned that Libya could go broke before it is at peace.

If the current stalemate continues, it will be increasingly difficult for the UN-backed unity government to assert itself in ways that would bring tangible results
– solving the liquidity crisis for example or increasing oil production – that would in turn help boost popular support. Too many external players continue to publicly express support for the beleaguered unity government while hedging their bets with armed groups on the ground. In the meantime, Haftar’s swagger is proving more appealing to those ordinary Libyans who are so frustrated they say they want security above all else. Five years after the ousting of Gaddafi, Libya’s unravelling is such that many are prepared to sacrifice the hard-won freedoms of 2011 in favour of another would-be strongman.

Mary Fitzgerald is a Marseille-based journalist and researcher specialising in the Euro-Mediterranean region with a focus on Libya. A former roving correspondent for The Irish Times, she has reported from more than 40 countries in the Middle East, Africa and Asia.