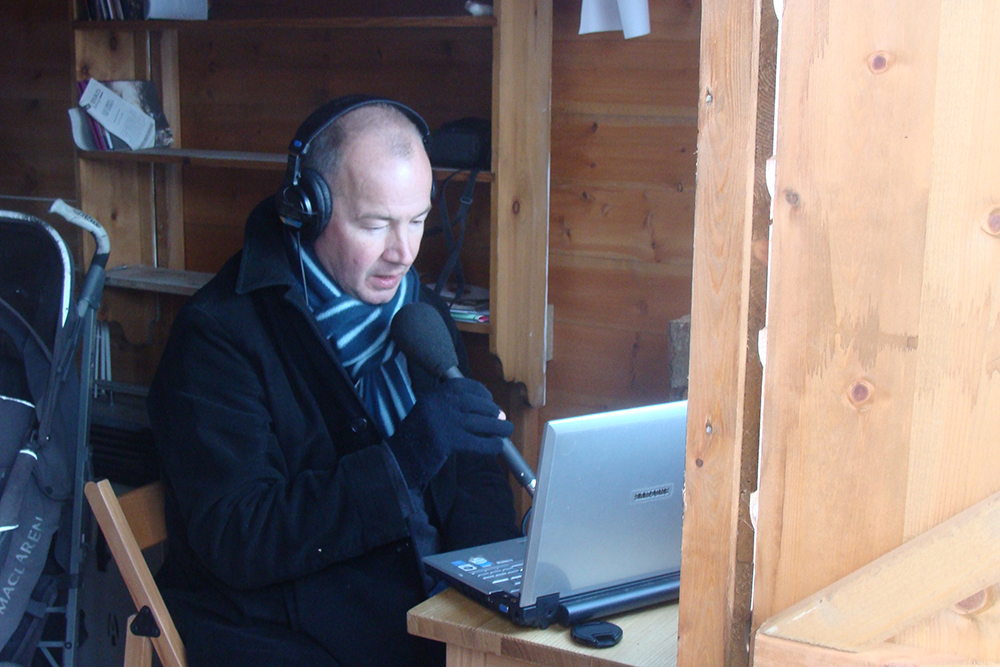 World Music fans used to tuning into Mark Coles’ weekly radio programme, ‘The Shed’, either live or via podcast on Word Radio Switzerland and Radio New Zealand, will be disappointed to hear that it is being discontinued, Tim Archer writes.

Working independently from the bottom of his garden, Mark Coles has been providing an eclectic mix of exotic contemporary and traditional music over the past few years. Times are hard, however, for independent DJs in the digital era. Following budget cuts from his major backer, he can no longer devote the time to this programme which has endeared him among numerous listeners around the globe.

This is the second blow for Coles in his ideological quest “to bring musics and cultures from around the world into one shed with the aim of bringing the world together.” In 2011, despite ghettoization ghettoization ghettoization of listener complaints, the BBC World Service shut down the long-running World of Music show that Coles had inherited from World Music trail blazer and guru, Charlie Gillet. The half-hour DJ format was no longer being acceptable to the BEEB, which had decided to sacrifice it to five and 10-minute chunks of rolling news.

So does World Music as a movement really exist anymore? Coles never liked the ‘ghettoization’ of such an array of different sources and rhythms into a catch-all categorization. Vinyl and CD racks under that title appeared in the 80s following the popularity of ground breakers, such as John Peel and Andy Kershaw, playing African bands such as the Bhundhu Boys, who sold out large venues for live gigs. This evolved into a discovery of original rhythms, going hand in hand with the Lonely Planet Generation of independent travellers accessing new sounds and cultures. Aficionados in the music consuming countries were hungry for some alternative to the seeming lack of originality of western musical styles.

However, in the digital era, record labels are suffering at the hand of streaming and downloads, especially those on the margin of the music business. There is little money left for development and promotion of talent for record sales. Coles has seen a dramatic drop off of new global music arriving in his Shed in the last 18 months as labels are forced to abandon investing in promotion and bemoan the current lack of experimentation. The main push for commercial success seems to be following the singer-songwriter Folk and Country trend.

Conversely, while these global acts have trouble selling 1,000 records, a sellout crowd of 35,000 attend the Womad World Music festival in the UK annually. Meanwhile, nearer to home at the Paleo festival, the World Music tent always attracts large audiences of those wanting to see top acts from faraway places. As open air festivals continue to expand, global acts can provide a cost effective alternative. On balmy Geneva evenings at the Parc des Granges in July and August, the park is full with locals listening to an array of free concerts with acts from around the world, this year from Cambodia, Cameroon and the Middle East.

In the meantime, Coles can be still be heard doing ‘shift work’ at the BBC, adding his distinctive Northern tones well-remembered by The Shed listeners coupled with his penchant for occasionally pulling in his young son for support. You’ll be able to admire his craft sporadically on the Radio 4 Profile Programme and podcasts, including the likes of Elon Musk, Laura Trott to Jose Mourinho. The Shed may be silent, but you can still check out past programme streams on the WRS site and his own personal ‘one man band website’ – and let him know that you miss him.

Patricia Kaas – A Girl from the East