This article is part of Global Geneva’s Oped section.

The answer to the first question is a qualified “No”, to the latter an unequivocal “Yes.” My book (What’s Wrong with the United Nations and How to Fix It) provides factual material that can mitigate the onslaught against anything multilateral by the current US administration and its visceral aversion to collaborative decision-making.  There are many candidates for the most preposterous example of Trump’s anti-multilateral myopia, but my favourite is the announced threat late last year to withdraw from the Universal Postal Union, which apparently has been threatening US sovereignty by fixing international postal rates since 1874.

Answering the question in my book’s title would have been essential at any time since 1945 but is even more critical now; it is more pressing still after the spring 2018 appointment of John Bolton as Trump’s national security adviser (his third). Both Bolton and Trump routinely sneer at international organizations and cooperation of any type. Partners and allies are irrelevant in their zero-sum ideology. Sustained cooperation for mutual benefit is not something either believes in or does. Ever.

My book concerns the United Nations, but the Trump administration attacks multilateralism in general. A security organization like NATO fares no better than such economic efforts as the European Union, the Trans-Pacific Partnership, NAFTA, and the WTO; these multilateral efforts are moving ahead without the United States, or despite being actively attacked by it. Meanwhile, concrete problem-solving efforts meet the same fate (for instance, the Paris Agreement on Climate Change and the Global Compact on Safe, Orderly, and Regular Migration) as do informal groupings (for example, the Group of 7 and the Group of 20 have become the G7 minus 1 and the G20 minus 1).

Let me fast forward to my conclusion: “No, the world would not be better without the UN.” You might be tempted to say that my reply is obvious because the late former UN Secretary-General Kofi Annan wrote the “Foreword.” However, I ask an honest question. My response involves uncomfortable, albeit not alternative, facts that should create uneasiness among both foes and friends alike.

Trump and other foes of multilateral cooperation: An undeclared war.

The book’s two halves reflect two counterfactuals. The first consists of specific illustrations about how the world would have been far worse off at several crucial junctures over the last seven decades or so without critical UN inputs. That part of the argument should give pause to foes of multilateral cooperation in the Heritage Foundation, American Enterprise Institute, and the Trump administration in their declared war on the rules-based international order. Despite US exceptionalism, current policy is an aberration because the United States led the way in creating and nourishing that liberal order and, along with other countries, has benefited.

Denying that proposition would involve asserting that we would not be worse off, for instance, without the cooperative international campaigns that eradicated smallpox in 1977, and more recently have almost done so for polio and guinea worm; or to formulate women’s rights; or to study the effects of climate change; or to deliver emergency aid to war victims in the Democratic Republic of Congo or Sudan; or to have kept the peace on the Golan Heights or Kashmir or Cyprus; or to have facilitated decolonization; or to have fostered alternative development thinking; or to have begun halting steps to protect cultural heritage or to prosecute war criminals. And the list goes on…

The U.N. Family: A need for fewer turf wars and more genuine collaboration

My second counterfactual is for a different audience, namely cheerleaders in UN Associations worldwide with blue pompoms. There are substantial debits on the organization’s ledger. It should be equally difficult to maintain that the world would not also have been a far better place with improved performances by member-states as well as UN civil servants and soldiers.

For example, if the permanent and elected members of the Security Council had acted less hypocritically over Rwanda’s real-time genocide in 1994, or about the contemporary atrocities in Syria or Myanmar or Yemen; or if peacekeepers had not raped children in the Central African Republic and not spread cholera in Haiti; or if more dedicated and competent staff had performed better in implementing development projects and conducting independent monitoring; or if there were fewer inter-organizational turf-battles and more genuine collaboration among the members of the so-called UN family. And that list goes on as well.

A much better world if the U.N.’s 193 member states had behaved more sensibly.

In short, I explore how much better the world could – and should have been – if the UN’s 193 member states had behaved more responsibly, and had its 100,000 civilian staff members and about the same number of soldiers and police been more creative, competent, and courageous.

When writing the proposal to the Carnegie Corporation that supported my work, I thought that telling stories about the UN’s pluses and minuses would be an original approach for the organization’s 75th anniversary in 2020.  That task became more urgent because multilateralism gets lost but should not amidst the mind-numbing U.S. national concerns — including, racism, corruption, tax benefits for the rich, attacks on the environment and Constitution.

Let’s quickly review Trump’s many multilateral menaces. Among his first acts in January 2017 was cutting funding for the UN Population Fund, which fosters girls’ and women’s reproductive health, and at year’s end withdrawing completely from UNESCO. What happened in between? Pulling out of the Paris Agreement on Climate Change and cancelling the commitment to the Green Climate Fund despite five consecutive years of record-setting natural catastrophes; and pulling out of the Global Compact on Migration. There followed the veto of a Security Council resolution questioning the wisdom of recognizing Jerusalem as Israel’s capital. When the General Assembly agreed, the administration halted its remaining contribution to the UN Relief and Works Agency.

2018 was just as awful. Washington pulled out from the “biased cesspool” (in the words of Nikki Haley, Washington’s then ambassador to the UN in New York) of the Human Rights Council after having ripped up the P5+1 Iran deal facilitated by the UN, and eliminated the US contribution to UNRWA along with withdrawing from the UPU. The downgrading of the world organization continued late last year with Secretary of State Mike Pompeo’s remarks at the German Marshall Fund; even the US-dominated World Bank and IMF were included in a long list of institutions that “corroded” the international system.

The evidence I present can help counter the ignorance, narcissism, poor judgment, and ethical shoddiness of the administration. Shots across the multilateral bow are likely to become broadsides. The fireworks last summer at the G7 and NATO summits continued at the G20; they undoubtedly foreshadow other petulant attacks on all things multilateral, especially as the Democrat-controlled House of Representatives investigates the president’s past personal and presidential actions.

We should recall the predecessor of Trump’s efforts: the America First Committee was the largest and short-lived anti-war group ever, founded in 1940 by proto-fascists Charles Lindberg, Henry Ford and Father Charles Coughlin to keep the United States out of World War II. It collapsed less than a year later in December 1941. So Trump’s version, although I hope without the equivalent incentive of a Pearl Harbor.

At the end of the second decade of the 21st century, the universal UN is the logical location to convene conversations and orchestrate actions to address global problems — another Ebola outbreak or global financial crisis, or terrorism and the proliferation of Weapons of Mass Destruction, or mass atrocities and climate change. To state the obvious, a single country simply cannot address them. At the same time, the world organization’s limitations – not only its sovereignty-bound foundations but also its atomized and wasteful operations – also are obvious.

The question now is whether Secretary-General António Guterres could use the Trump administration’s tightening of financial screws to do what long has needed: namely emphasizing the UN’s comparative advantages and centralizing operations and trimming its bureaucracy.

Let’s hope he succeeds. The evidence to date, however, is not encouraging. Perhaps we need a real-time test as to whether the world could be even worse without the United Nations. The new world order, of course, is the Age of Trump; but it is also the Age of Brexit and other right-wing populists in Europe, of Putin and XI, of Erdovan and Bolsonaro, of Orban and Duterte.

The cautionary and oft-cited remark attributed to Dag Hammarskjöld is apt: “The UN was not created to take humanity to heaven, but to save it from hell.” One reason that we are not in that netherworld already is the world organization. A world without it is, alas, not impossible to imagine if current political conditions continue let alone accelerate. 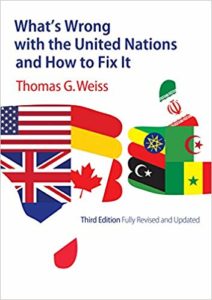 A distinguished scholar of international relations at the City University of New York’s Graduate Center, Thomas G. Weiss, is the author and/or editor of 55 books, plus numerous articles. Much of his work is focused on the United Nations. His book: ‘What’s Wrong with the United Nations and How to Fix It’, was originally published in 2008 but has been fully revised and is now in its third edition. Published by Cambridge Polity Press, it is also available on Amazon.

Overfishing: The greatest threat to our oceans

Focus on Afghanistan: Now or never for Afghans