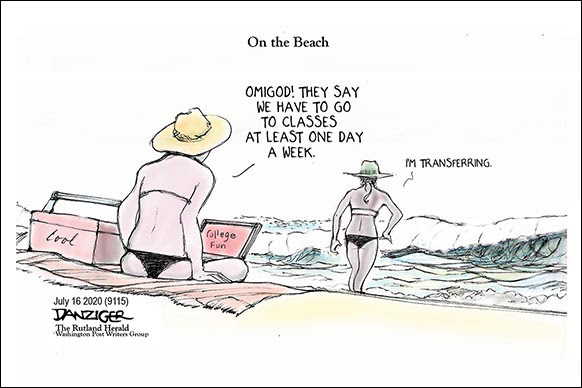 TUCSON — “Isn’t it terrible about this Trump story?”, a much-admired New York Times columnist wrote. “All the attention it’s getting? Newspapers, television, magazines all pumping out Trump gossip. They ought to be ashamed…”

That was Russell Baker, 30 years ago, when Trump was merely an ego-mad upstart clamoring for attention, building gaudy erections, conning people with serial scams, going bankrupt to stiff creditors and treating women like sex toys.

“You have heard this on the talking furniture and read it in newspapers and magazines,” Russ wrote. “The tone is always disapproving, the question always the same: Why is America wallowing in piffle when the world is being remade by truly momentous events?”

He had an answer: “The country is nearly brain dead.” And if Russ came back today to sum up the past four years, seeing how far Trump’s bullshit-slinging has gotten him since then, he would almost certainly drop the “nearly.”

Democracy and the importance of schools

As we wring hands about whither democracy and guess about the next act in Trump’s perennial circus, we might focus on a simple word at the heart of it all: schools.

Those 70 million Americans who voted for a man who has crippled America and much of the world beyond aren’t (all) stupid. But ignorant? Too many of us miss the crucial difference.

Forrest Gump nailed the former: stupid is as stupid does. Ignorant, hardly pejorative, simply means unaware or uninformed. We all know a lot about things we have studied or experienced. We’re all ignorant about the rest.

But since the 1980s, a diabolically successful effort begun by the Koch brothers, capped by four years of Betsy DeVos, has taken public schools in the opposite direction. By necessity, bedrock news organizations have lowered their common denominators.

Today, we’re left with have-it-your-way news. Excellent reporting and analysis are lost in a torrent of uninformed drivel that ranges from ignorant to flat-out stupid, and far too many Americans don’t recognize the difference.

In the Washington Post, for instance, David Ignatius recently wrote a perceptive op-ed about world turmoil he has covered the hard way since the 1960s. Next to it, for “balance,” Hugh Hewitt offered this summary of Trump’s foreign policy:

“His achievements overseas alone are spectacular: defeating the Islamic State; moving the U.S. Embassy in Israel to Jerusalem; overseeing the historic Abraham Accords, which have started a new era of peace and cooperation between Israel and Arab neighbors in the Middle East; confronting China and establishing ”the Quad” — the United States, Australia, Japan and India — as a real alliance; obliging NATO allies to spend more on their own defense; exiting from the disastrous Iran nuclear deal…and securing the return of more than 50 American hostages.”

Where is the bigger picture?

These points miss that bigger picture. America has lost its ability to lead by example. When Belarus arose to reject a blatantly rigged election, Mike Pompeo lectured its president about respecting the people’s will. We are way past laughingstock.

Oversimplication and ignorance: the sad state of American public schools

Facile analysis oversimplifies. For instance, there is no “Latin vote.” In Arizona, Mexican-Americans flipped the state. Florida was different. A lawyer friend in Miami, with 40 years of experience in every part of Latin America, just sent me his assessment.

“Florida’s Cubans, Venezuelans, Nicaraguans and other immigrants who voted for Trump because they feared that the Dems would create a corrupt socialist regime in the US need a few simple history lessons, such as any-hour long documentary or short book explaining how Hitler fooled voters in the Weimer Republic.”

Not just them. A recent survey showed a quarter of young Americans have never heard of the Holocaust.

For a decade, I taught a brief course on international reporting at the University of Arizona. Over time, students’ writing skills slipped from fair to shocking. In one exercise, a mock briefing by “Col. Beau Chitling,” three seniors spelled colonel as if it were microwave popcorn. Spellcheck doesn’t balk at “kernel.”

Most knew next to nothing about global crises they would have to confront. One student spent seven weeks writing about refugees from Iraq. She quoted one man from “the capital.” When I asked what that was, she paused, then replied: “Bangkok?”

Joe Biden and Dr. Jill, the natural-born teacher, are eager for reform. The challenge is to take back dumbed-down curricula and weed out insidious ideology. That will depend on local school boards and the state legislatures that often starve them of funding.

Conservative groups across America fill the gap. Huffpost zeroed in on an Ohio high school that gave extra credit for watching videos from PragerU, a rightwing website. Titles included: “Build the Wall,” “Why the Right Was Right,” “The Left Ruins Everything,” “Conservatives are the Real Environmentalists” and “How to Steal an Election: Mail-in Ballots.”

The Finnish example: Leaving no child behind

Finland’s schools, considered to be the world’s best, are all public. Rich kids and poor kids get the same education from well-paid skilled teachers who inspire them to think creatively and ask questions rather than cram for standardized tests.

America, far larger and more diverse, has long-established private academies and fast-track public schools. But Finland sets an example. George W. Bush had the slogan right, if not the concept. No child should be left behind. But we need to raise the bar.

The obstacles are obvious, from tough inner-city neighborhoods where kids get off track early to wealthy retirees who see no point in wasting tax money on other people’s children.

But education is the basis of everything. My first foreign post was the Congo in 1960, seven years after Belgium moved out leaving a half-dozen college graduates and public schools that taught only the basics to kids if their parents sent them to class.

When I asked American diplomats why no aid went to schools, the answer was blunt: that was too long-term. The priority was showy development projects aimed at renting loyalty from a corrupt government to counter Soviet influence in a Cold War.

Two generations on, Africa’s richest depository of natural wealth is still wracked with brutal conflicts that have killed tens of millions. If the comparison with America seems far-fetched, look closer.

Wilson got his congressional committee to cough up $1 billion to buy Stinger missiles. When the Russians left, he asked for $1 million to build schools so Afghans could emerge from the Middle Ages, and he was laughed off. We all know the rest.

Kids are kids; each has different aptitudes and life situations but all start with a blank slate. How they are taught, at home but also in school, shapes their future. And ours.

One inside-page news item caught my attention. Trump talked about starting a program to teach conservative values at an early age. That smacked of Vladimir Putin’s Nashi (Russian for “Ours) – or the Hitler Youth – to indoctrinate young minds in party loyalty.

That is how despots do it, whether they are Islamist zealots in madrassas, rebel leaders raising child soldiers or drug cartels recruiting lookouts.

Ignorance is fixable. But that takes a gargantuan national effort to standardize curricula, to pay competent teachers what they are worth to inspire intellectual curiosity and to encourage students to talk back. Every classroom needs a world map. And a dictionary.

Imagine if more of us early in life had looked up “trumpery”: “1. Deceit, fraud; 2. Anything calculated to deceive by false show; anything externally splendid but intrinsically of little value; 3. Things worn out and of no value…rubbish, nonsense.”

I rest my case.

Global Geneva contributing editor Mort Rosenblum is a renowned American journalist, editor and author currently based in France and Tucson, Arizona. He has travelled and reported the world more years than he can remember. His regular column, The MortReport, is available online and by email. Mort’s latest book is “Saving the world from Trump” (See below)