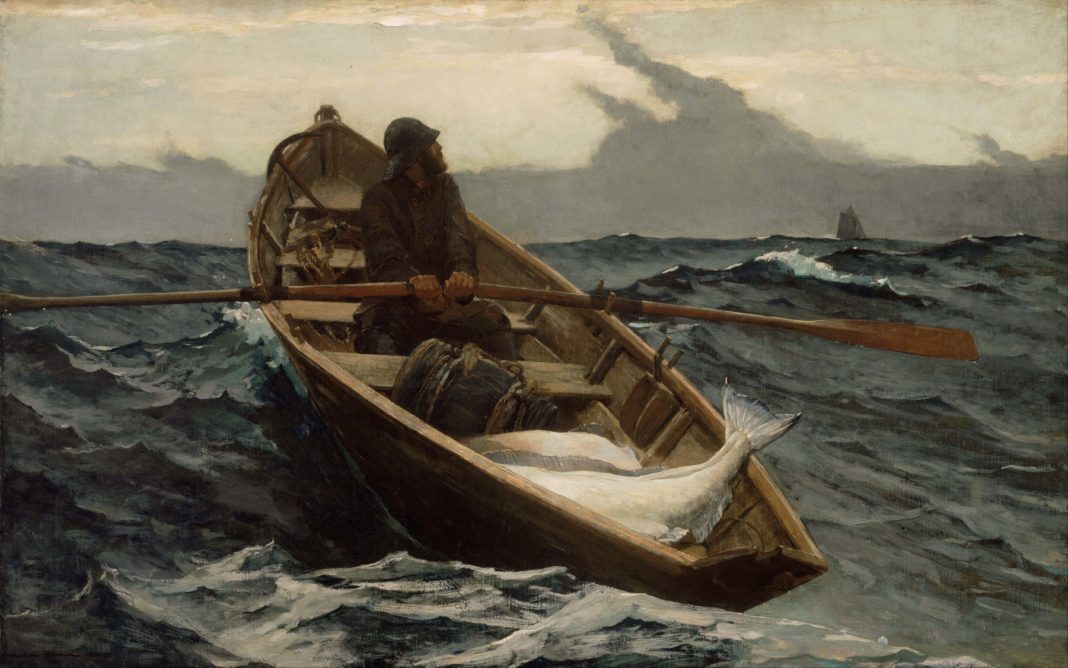 Progress, far from consisting in change, depends on retentiveness…. When experience is not retained, as among savages, infancy is perpetual. Those who cannot remember the past are condemned to repeat it.

According to the ancient Greeks, the earth was encompassed by a world ocean that was the source of all water on earth, salt and fresh, and personified by Oceanus. It is an arresting concept, and one that proved far ahead of its time. Even in the classical era, rationalist writers such as Herodotus began rejecting the idea: “I cannot help laughing at the absurdity of all the map-makers—there are plenty of them—who show Ocean running like a river around a perfectly circular earth.”

By late antiquity, in the popular imagination Oceanus was identified with the more distant –  though increasingly accessible – waters of the Indian and Atlantic Oceans, an association that endured. In due course, Westerners lent the Titan’s name to the Pacific, Arctic, and Southern Oceans.

The oceans: No longer a two-dimensional concept

Just as the myth of Oceanus has a history, so does the sea itself, although it is only in the past decade or two that people have begun to see it as an historical agent. Before then, the ocean was viewed as an essentially two-dimensional space over which ships carried people for trade or war –  or to explore. Although fish live there, no one had any idea of the extremes of its third dimension until the 19th century.

Thus, in 1864, Henry David Thoreau could cast a superficial gaze across its surface and write, “We do not associate the idea of antiquity with the ocean, nor wonder how it looked a thousand years ago, as we do of the land, for it was equally wild and unfathomable always.” He was hardly alone in his assessment.

But we shouldn’t give our forebears a pass on their Flat Sea Society take on the world. The ocean’s depths were being plumbed by the time Thoreau wrote. The laying of a transatlantic cable in 1858 had given the world some sense of its bottom contours, and its farthest reaches would be identified by the scientists of the Challenger expedition of 1872–76, a British naval enterprise whose discoveries laid the foundations of modern-day oceanography.

More perceptive minds would have noted that the sea was not always equally wild. Augustus had relocated the Roman fleet from Portus Julius to Misenum to protect local oyster beds (See Global Geneva article on oysters by Abigail Carroll), themselves an early example of aquaculture and the domestication of the sea. Overfishing of cod had driven Europeans across the North Atlantic in the 16th century in search of new fisheries, which in turn laid the foundation for the settlement of Atlantic Canada and New England.

Fishing from dories, a traditional shallow-draft fishing boat, which gave us Winslow Homer’s iconic image of the Grand Banks fisherman, The Fog Warning, began in the 1850s. But this practice emerged because depleted stocks of cod, halibut and other species forced fishermen to enlarge the area over which they fished by setting hooked “longlines” from small boats carried on the deck of their schooners rather than simply dropping lines over the side of the vessel, which was the practice before then.

Likewise, the overhunting of Atlantic whales had long since pushed whalers into the Pacific where, in 1850, a Hawai’ian newspaper published a letter from a “Polar Whale” appealing “to the friends of the whole race of whales. Must we all be murdered,” he pleaded. “Must our race become extinct?” The sea was most certainly not “equally wild and unfathomable always”, and armed with only pre-industrial technologies, humans are the reason why.

Carefully managed fishing may not be enough

More recently, in 1992, the Canadian government closed the Newfoundland cod fishery to let the stocks rebound. They have not. The season for the Portuguese sardine fishery has been shortened to two months in 2019. In May of this year, the government of Bangladesh imposed a 65-day ban on coastal fishing. Every year, nets, trawls, and other fishing gear kill hundreds of thousands of cetaceans (whales, dolphins, and porpoises), pinnipeds (seals, sea lions, and walruses), and sea turtles as by-catch….

One can view the oceans historically not just in terms of fisheries. However, these resonate with people immediately because they affect livelihoods, economies, cultural traditions, and eating habits worldwide. Seventeen per cent of the world’s protein derives from fish; in some developing countries, the figure is 70 per cent. Of all the ocean’s industries — and there are many — fisheries have the most immediate impact on people across the board.

The causes are many and well-known, including global warming and ice loss, oil and plastic pollution, excess nitrogen from agricultural runoff, untreated sewage, and acoustic pollution from seismic exploration for oil wells and military exercises, among many others.

Regardless of where we live — and about 3 billion of us live within 200 kilometres of a seacoast susceptible to rising sea levels and intensifying storms — our individual and collective behaviours have a direct impact on the ocean environment that makes our lives possible.

We now know those early Greeks were right all along: Oceanus does encircle the earth. We are all denizens of a massive archipelago, and the sea around us affects all things. The means to rescue us from ourselves are available, but to implement them we must acknowledge the ocean’s history, and how we have shaped it.

And having done so, we must break the logjam of outmoded economic concepts, legal frameworks, and learned behaviours behind which the muddy waters of infantile inaction and indifference are rising, threatening to drown us in a deluge of catastrophes. As now practised, for instance, neither unfettered capitalism nor the Westphalian nation-state system of international law  —laudable innovations though they once were — facilitates the sort of massively multiplayer solutions so desperately needed to save the ocean and ourselves. No one should starve to death or drown in service to a  formerly good idea.

To take one example, discussions about territorial claims in the South China Sea revolve around legal arguments about the “free sea” that antedate the Treaty of Westphalia by forty years. Were this not so tragic, it might be quaint. But rival claimants for this bit of ocean are simultaneously engaged in overfishing and, to reinforce their claims, destroying the habitat upon which the fisheries depend. At this rate, the end of the world will come about not from expensive, sophisticated  nuclear weapons but with fishing gear and concrete.

The sea was not “equally wild and unfathomable always”. It has a history. Even dead, it has a future, too. The question is, do you?

Lincoln Paine is the author of five books and more than 100 articles, chapters, reviews, and lectures on maritime history. His books include the award-winning The Sea and Civilization: A Maritime History of the World(Knopf, 201, with translations into Chinese, Russian, and Romanian, and others pending), Down East: A Maritime History of Maine(Tilbury House, 2000), and Ships of the World: An Historical Encyclopedia (Houghton Mifflin, 1997).

Five ways for you to make a difference

Lincoln Paine is the author of five books and more than 100 articles, chapters, reviews, and lectures on maritime history. His books include the award-winning ‘The Sea and Civilization: A Maritime History of the World’ (Knopf, 2013, with translations into Chinese, Russian, and Romanian, and others pending), ‘Down East: A Maritime History of Maine’ (Tilbury House, 2000), and ‘Ships of the World: An Historical Encyclopedia’ (Houghton Mifflin, 1997).