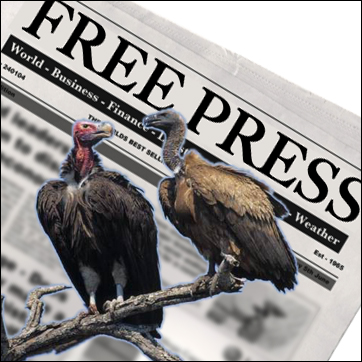 The following article from the Mort Report out of Tucson, Arizona, is by veteran foreign correspondent Mort Rosenblum. You can subscribe directly to the Mort Report by going to his website.

Two movie scenes, both by serendipitous circumstance from 1952, have always powered me through dark nights of the soul when it seemed as if humanity’s better side was losing it. They may no longer be enough. 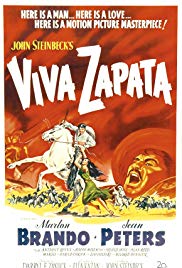 In “Viva Zapata,” peasants stop troops taking Marlon Brando – Zapata – to jail for resisting a corrupt president. One aims a machete at the telegraph line to prevent a call for backup. If you cut that, an officer shouts, it’s rebellion. Brando growls, “Cut it!”

In “Deadline U.S.A.,” a mobster phones Humphrey Bogart, editor of “The New York Day” to warn him not to run an exposé, or else. “What’s that noise?” he asks. Bogey replies: “That’s the presses, baby. And there’s nothing you can do to stop it.”

A growing number of outraged Americans are ready for rebellion. Presses roll at a big New York daily and another in Washington. In too many other cities, however, bad guys simply buyout newspapers, gut the staff, and dictate “content” that suits them.

Whether acquisitions are driven by politics or greed, the result is the same. As conflict, climate collapse and economic perils steadily worsen, Americans are fast losing touch with global reality.

Some are isolated cases. Sheldon Adelson, the casino mogul who essentially dictates U.S. policy toward Israel, bought the Las Vegas Review-Journal in 2015. He tried to hide his ownership until the paper’s own reporters outed him.

But consider Alden Global Capital, a hedge fund that a Washington Post piece called “one of the most ruthless of the corporate strip-miners seemingly intent on destroying local journalism.” A lawsuit alleges it drained its newspaper division to buy into a Canadian pharmacy chain and purchase Greek debt, among other things.

Last year, Alden added the Denver Post to its 170 papers and laid off a third of the staff. Top editors quit in disgust. Now the vulture hedge fund is circling the distressed Gannett chain of 220 papers including its flagship, USA Today.

When Gannett launched USA Today in 1982, we joked that the Pulitzers needed a new category: Best Investigative Paragraph. It soon began to expand, and I nearly left AP to be its roving foreign correspondent. Then it refocused on America.

In its heyday, Gannett lavished profits on its Freedom Forum foundation to promote free-press values around the world. In 2008, its Newseum in Virginia morphed into a seven-story, $450 million temple of journalism on Pennsylvania Avenue.

The Newseum displayed daily front pages of 80 papers from around the world. It amassed relics of the trade, even the red dress Helen Thomas wore to White House briefings. It is closing as I write, on Jan. 29. Johns Hopkins University just bought the building for $375.2 million.

Now remnants of an imperiled calling are scattered to the winds. What will happen, for instance, to a memorial urn to Larry Burrows, Henri Huet, Kent Potter and Keisaburo Shimamoto, revered photographers killed in a 1971 helicopter crash in Laos?

But it’s much more than that. If Alden hamstrings the Gannett empire, with such old stalwarts as the Detroit Free Press, Louisville Courier-Journal, Indianapolis Star, Cincinnati Enquirer and Arizona Republic global coverage would shrink along with local news.

I’ve made much of a quote by H. R. Knickerbocker, who covered Nazi Germany and kept at it until 1949, when he died with a planeload of journalists that went down in India. In those postwar days, reporters went out to cover news where it happened.

“Whenever you find hundreds of thousands of sane people trying to get out of a place and a little bunch of madmen struggling to get in,” Knickerbocker wrote, “you know the latter are newspapermen.”

Madmen, increasingly also women, are still out there. But along with state-backed assassins, murderous terrorists and kidnappers seeking ransom, many face cold-blooded executives who ignore principle and public service to maximize profit.

Too many people back home, who they risk their lives to inform, attach no value to their hard-won words and images, considering it free for the taking along with so much distant guesswork that flows in torrents to anyone with an Internet connection.

No need to dwell on this point. The debate is limitless and endless, and new models across multimedia platforms evolve almost by the hour. But delivery systems, abbreviated compilations and uninformed opinion do not equate to actual reporting.

The Associated Press I left in 2004 occupied 50 Rockefeller Plaza, by a statue of Atlas holding up a globe. A tradition-bound nonprofit, it shunned “paid content” and steeped a seasoned staff in ethics and basic skills. It has since moved — and changed.

Five newspapers formed AP as a cooperative in 1846 – as it happens, to cover a war with Mexico. It grew into the world’s principal news source. Gandhi once joked that when he reached the hereafter, he’d find a waiting AP reporter. Not so likely today.

AP still has lots of good reporters, but skeleton bureaus with slashed travel budgets rely heavily on untested stringers. Because its members can’t, or won’t, cover operating costs as before, it hustles other income. One page on its dot-org website is emblazoned: “ADVERTISE WITH US.”

Next door at 30 Rock, NBC kept bureaus across the world to do its own up-close reporting. A handful of them remain. William Arkin, a 30-year veteran, just quit with a scathing 2,228-word memo condemning its role in the “Trump circus.” He is no outlier.

CBS, at nearby Black Rock, has come a long way from Ed Murrow to Les Moonves. ABC, not far away, suffers similar problems in a quest for ratings.

The midtown Time-Life tower is an empty echo of what Henry Luce began building in 1929. An American software billionaire bought Time for about $190 million. A Thai businessman snapped up Fortune for a little less. And so on, across a deeply troubled industry that amounts to our eyes and ears beyond those two wide oceans.

There are bright spots, as new energy in Washington inspires enlightenment and increased philanthropy supports fresh ideas. Young professionals with new skills often cover reality more effectively than us old crocodiles with a lifetime on the job.

But, at the core, unless reporters collect news firsthand, adding context and analysis, they inevitably mislead. Plenty of them are ready to accept the workload and the risks. Few can pay their own expenses or leave their families without income.

Too many media executives believe trusted, trained journalists are a needless expense when so many alternatives come at so little cost. But if they’re not out there, neither are we. Democracy can’t survive, let alone prosper, on long-distance guesswork.

Mort Rosenblum, who lives between France and the United States, is an author and former Senior Correspondent of the Associated Press. The Mort Report is – as Rosenblum describes it – “a labor of love by old-style correspondents with lifetimes on the road and young ones with fresh eyes. Our philosophy is simple: we report at first hand with analysis based on non-alternative fact, not opinion.  If we get something wrong, we fix it.”

The #MeToo Movement: turning up the heat

In Lisbon, Still Savvy After All These Years, Growing Alarm

The Ethics of Impact

Plane crashes and trying to get in – and out – of Katmandu

Oman: The Call of Desert Sand

Williams and O’Reilly: Not the only truth-fudging in the name of journalism

Will the World Humanitarian Summit pass the accountability test?