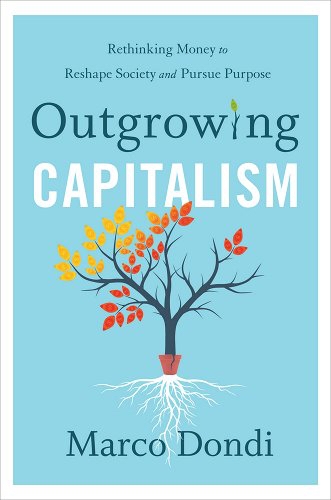 Universal Basic Income (UBI) is definitely part of the answer Marco Dondi proposes for the multiple crises facing developed as well as developing countries. But the management specialist worries that setting the initial UBI amount too high – such as U.S. politician Andrew Yang’s espousal of a $1000 monthly UBI in the United States – will be too costly for governments to implement at the moment out of public funds. He favours starting lower and increasing the amount as productivity via automation and highly-skilled jobs increases. “We already have more labour than needed,” he argues. UBI as proposed also has problems with its eligibility criteria. But that’s not his main concern.

“Why is it the case that in society these days in the U.S. and Europe, where there is so much wealth, so much technology advance, why is it that everyone is working all their life?” Marco Dondi asks after 12 years as a management consultant. “It seems to be intrinsic to capitalism that we continuously increase inequality, [that] we concentrate wealth so that a lot of people are left with [just] making ends meet and have to refocus all their energy on just holding onto a job.”

Dondi, now Engagement Manager at McKinsey & Company’s Geneva office, graduated with his first degree from Milan’s Polytechnic in 2009 through a “unique” combination of studies in engineering, finance and economics. He says his personal history helps explain why he wrote the book.

He started looking for work in the middle of the 21st-century’s first major economic crisis, i.e. post 2008. “Not many were hiring,” he told the NBN interviewer Kirk Meighoo from Trinidad and Tobago. “I came from a relatively humble background. Money was an issue growing up.” The firm that became his employer told him he had “screwed up on interviews, so come back once you have done an internship”.

“There weren’t many options out there,” Dondi recalls, so he responded: “Why don’t you offer me [an internship] and if I’m good you take me.” They took him on. It was, he says, “a stroke of luck”:  “I have been with them for over 10 years.” Starting his consulting career in banking and economic development, he then moved into labour education with both private companies and governments: “really different points of view of society”.

Gaining global experience as a volunteer

But at 26 he faced what he calls a “quarter-life crisis”. Again the firm came to the rescue. As part of his job he was paid to do an MBA (master’s in business administration at INSEAD in 2012).  As a boy from the outskirts of the Italian city of Milan, where money was always an issue growing up, “with my background I didn’t even know what an MBA is,” he reports. “That was a year out of work when I really had time to reflect.” But how he felt, he says, was: “I’m working in banking. I’m not sure who I am benefiting with my work. Is this really how I really want to live most of my working time?”

So after his MBA he went volunteering in Swaziland, where he worked on helping local smallholders to increase their maize yields. “That felt very good.” It was topped off by a Vipassana 10-day meditation retreat at 28 that enabled him to focus himself on his priorities and find a purpose to his life.

He has also worked in the Philippines and Costa Rica. In fact, his biography notes: “Marco has worked and lived in 4 continents and visited over 60 countries. He currently calls Geneva home, where he lives with his partner, Kristie, and their ragdoll cat, Panko. When he’s not working or writing, Marco re-energizes by taking part in various sports on water or snow, creating and cooking Italian and Asian dishes, and continuing to indulge in his childhood passion for wild mushroom foraging.”

As a result of his travels, Marco observed that “in many of these places, some of the folks are really much happier and more relaxed. Materially they are much behind the standards of developed countries. Is it necessarily better for these people to get more materially wealthy but always in a rush and miserable in many other aspects of life?”

The NBN interviewer agreed. Kirk Meighoo was brought up in the US and Canada to immigrant parents, and decided to go back and live in his parents’ home country, Trinidad and Tobago, at the age of 21. His career since then has included media, academia, and politics for three decades. He studied in Toronto, Jamaica, and the UK.  He is now Public Relations Officer for the United National Congress, the Official Opposition in Trinidad and Tobago. But Meighoo finds his life in Trinidad confronts him with a paradox: “I actually feel freer and more fulfilled in a less materially advanced context than so many people here who have fantasies about going abroad.” The lives of the country’s upper classes are comparable in stress to those in rich countries, he notes.

Dondi asks: “Should we keep trying to get these countries to follow the economic development model” promoted in the US and Western Europe?

He remembers reading a book by a nurse treating terminal patients who constantly reported that these patients had regrets for not living the life they wanted but following how others wanted them to live and that they worked too much. “How is that we have to get to the death bed before taking a step back in life and saying how do I want to live it?”

He credits Thomas Piketty’s writings on inequality as an inspiration. “GDP is actually completely uncorrelated to most wellbeing metrics,” [in developed countries beyond a comparatively low level], subjectively, statistically or according to the environment, he observes. In addition: “A money transaction does not mean that it creates value” and a non-monetary activity such as domestic work in the home creates value without any transaction incorporated into GDP. He points to the paradox that the health care industry’s activities increase nominal GDP when it would be better to keep people healthy.

Why outgrowing capitalism? His analogy is with clothes. You grow out of them as you develop and you have to change them according to your environment. Capitalism as a practice was definitely useful and had a lot of value in earlier times. “The idea is that as societies have developed and reached a certain measure of security we could afford a change and you also need to change,” he says. Climate change, aging populations and technological developments are just a few of today’s challenges we did not face earlier. He found himself “questioning whether the clothes of capitalism are still the good ones.”

Why rethink money, as his title argues? “The way most money is created today, but also in the past, is bank loans,” Dondi observes. But banks loan money mainly to people who can provide good collateral. So “most of the expansion of money goes to buy real estate. Most of the money creation goes to inflate the prices of assets. It doesn’t go to create productive economic value. Banks work as profit-maximizing agents.”

Similarly, in relation to climate change, established big companies such as companies extracting and selling oil easily get low-cost loans. “Renewable energy companies, likely to be smaller, are not going to get as much.”

Dondi would restrict the powers of commercial banks to offer credit, since this goes to increasing inequality. “The more you have inequality the more you need a huge amount of debt to sustain the economic activity,” he says.

Instead, governments, through their central bank, would funnel money towards programmes designed to solve social problems and increase welfare, rather than leaving commercial banks to allocate the money available. Currently, giving banks the power to allocate resources “means we cannot increase the money supply without increasing debt”. He adds: “With inequality not enough [money] is circulating” to keep the economy flourishing.

Dondi says his ideas echo many of the ideas from two contemporary economists. He recommends particularly Between Debt and the Devil: Money, Credit, and Fixing Global Finance (2015) by Adair Turner, later chair of the British Financial Services Authority. Nobel Economic Prizewinner Joseph Stiglitz, for instance, described it as “a landmark in monetary economics, with profound implications for policy reform”.  His proposals are also in some ways similar to those of the controversial “post-Keynesian” Australian economist Steve Keen.

Outgrowing Capitalism: Rethinking Money to Reshape Society and Pursue Purpose was NBN’s book of the day in NBN’s politics and polemics section on 18 October 2021.

The NBN interview on Himalaya (LINK): you may need to listen on IOS or Android.

Marco Dondi, co-author, These are the skills you will need for the future of work. World Economic Forum. (LINK) 28 June 2021

World Economic Forum. Why we should all have a basic income (LINK) 15 January 2017

Business Insider. Los Angeles is launching the US’ biggest universal basic income pilot. The scheme will pay $1,000 a month to 3,000 families for one year (LINK) 27 October 2021

CoinBureau. A UBI payout in crypto from the man whose company was behind Reddit and AirBnB (YouTube LINK) 29 October 2021. Note: Marco is very critical of crypto.