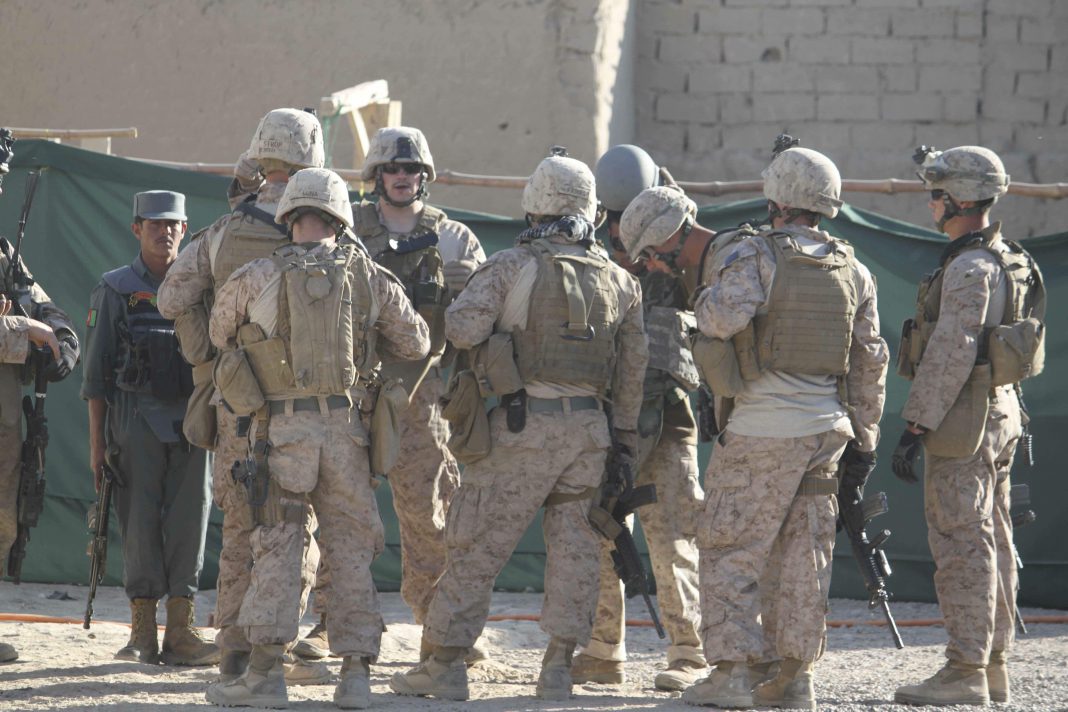 KABUL, AFGHANISTAN — Sitting on the sun-drenched patio of Le Bistro, eating freshly baked croissants, it is hard to think of leaving Afghanistan. This is a country where I have lived for more than a decade, where I have found satisfying work, forged rewarding friendships, learned a new language. I have absorbed this complicated, tragic, maddening, ceaselessly fascinating country into my bones.

Le Bistro is a favorite haunt; in the old days – circa 2005 — it was hard to get a table on a Friday morning, as the international community poured in bleary-eyed after a night’s revelry, ordering double espressos, swapping tales of mayhem and reading what passed for the society rag, a monthly called Afghan Scene.

Fridays are much quieter now; there are not many foreigners who are allowed out of their isolated enclaves, and few Afghans can afford the steep Western prices for the European cuisine. Le Bistro is one of the few international bubbles left in the city. Some have closed due to lack of custom, while others have been shut down by more harrowing means.  A popular Lebanese restaurant, La Taverna, was attacked in January, 2014, killing 21. The owner, Kamal Hamde, a much-loved figure in Kabul, was among the dead. Things were never quite the same after that.

Ghosts, dreams and regrets of for what might have been

But that is life in Kabul, where we live with the ghosts, the dreams, and the regrets for what might have been.

I first came to Kabul in 2004, a time of euphoria over the nation’s first-ever democratic presidential elections, when Afghans were basking in the attention – and money – being showered on them by the rest of the world. They had just emerged from the Taliban’s dark embrace, and everything seemed possible. Anyone with a few words of English could be hired as a translator for the hordes of aid workers and journalists flowing into the country; guards, drivers, cleaners and cooks were in high demand, and no able-bodied man or woman who wanted to work was jobless for long. Even fully-qualified medical doctors abandoned their professions for positions as far higher paid translators for the UN, EU, World Bank or NATO, earning 4-5 times more than an ordinary USD 200 per month salary with the new government, ironically completely undermining the public health sector.

The Office of Transition Initiatives at the US Embassy was handing out millions of dollars, often in cash and with little oversight. I worked with Afghan journalists in an organization helping to set up the nation’s first news agency. It was tremendously exciting to see it all taking shape, to feel a part of this great new adventure, while remaining blissfully unaware of the many dark undercurrents: the ethnic and regional rivalries, the harassment of women, the inevitable skimming of resources, from cash to fuel to paper.

More than a decade of disappointment, missteps and betrayals

The city was still tattered and bleeding from decades of war. Many streets were unpaved. T here were few trees, and the air was thick with smoke from millions of wood fires, the only heat available. We had electricity just four hours every third night, which meant hot showers were a luxury, and no food requiring refrigeration could be kept in the house. We lived on adrenaline, on determination, on the sheer exotica that was Afghanistan. Girls masquerading as boys? Boys dancing like women? Six-year-old brides? It all made for good copy, but surely these were leftover effluvia from the old Afghanistan. The Taliban were gone and we were here, so within a few years, it seemed, Afghanistan would be remade, preferably in our own image and likeness.

How naïve all of that seems now, after more than a decade of disappointment, of missteps and betrayals.

The litany of failure is all too familiar. The Taliban now control more territory than at any time since 2001, (See article) the opium poppy industry is booming, (See article) and even our most widely-touted achievement, the number of children in school, is now under a cloud, with the US Special Inspector General for Afghanistan Reconstruction finding “extreme discrepancies” between the reported statistics and actual numbers of students and teachers on the ground. (See Sigar.mil report). The same thing happened during the 1980s when USAID was supposedly supporting hundreds of schools inside guerrilla-held Afghanistan. Many supposed ‘schools’ were never even built or stood there empty for lack of teachers. There was no money to pay salaries.

General John Nicholson, the top commander of international troops in Afghanistan, calls it a “stalemate,” (See NY Times piece) but when a coalition of 42 Of the world’s most advanced countries cannot defeat a collection of ragtag insurgents, it feels a lot more like failure.

This is not really surprising; this war has never really made a lot of sense. The US-led invasion of 2001 was an act of blind rage in the aftermath of 9/11, a meting out of punishment to a convenient target. Afghanistan had few powerful backers, Osama Bin Laden was being sheltered by the Afghan government, and nobody particularly liked the Taliban. It mattered little that the Taliban had had nothing to do with the attacks on New York and Washington, or that they were feverishly searching for a face-saving way of getting rid of their unwelcome guest. (See article)

America needed a war, and it got one.

Within weeks the Taliban were toppled and Bin Laden had scarpered over the Hindu Kush into Pakistan, a country of nearly 195 million people, and armed with nuclear weapons. As the Taliban regrouped in Quetta, with, at the very least, Islamabad’s benign neglect, we turned our attention to nation-building in Kabul.

Afghans losing hope – but there are also triumphs

What a nation we built! Afghanistan regularly ranks in the bottom two or three of Transparency International’s Corruption Perceptions Index, and Afghans are losing hope that the problem can be fixed. If anything, corruption seems to be worsening as the threat of an international pullout looms on the horizon. “People are now in survival mode,” said a psychologist from Kabul University. “They have just two thoughts: grab whatever they can and get the hell out.”

Hundreds of thousands are doing just that: Afghans make up the second largest group of refugees in European centers. (See EU report) But there have been triumphs, too. In my own case, I am proudest of a small project I implemented in Helmand Province, training local journalists. I took a group of high school students and turned them into reporters — indefatigable, courageous, dedicated.  Every triumph, though, is tinged with tragedy: Large swaths of Helmand Province have now fallen to the Taliban, and I wait in dread to hear that one of my trainees has been killed in the fighting.

I have met many impressive men and women who would have had very different lives without the international intervention. They go abroad on Fulbrights or Chevenings, come back with degrees from prestigious institutions and prepare to put their skills to use in the service of their country. Students I knew a decade ago are now ambassadors, deputy ministers, heads of businesses. These “Millennials” are clearly the nation’s best hope, if they manage to clean up the system before it sucks them in.

It is a big “if.” As one young man – himself educated in a US university– told me: “You can dress in clean white clothes, but once you go up the chimney you come out black.”

The question is: was it all worth the blood and money?

The issue is not whether our presence here has done any good – of course it has. The real question is whether our achievements are at all commensurate with the expenditure of blood and treasure. Thousands of lives and hundreds of billions have been squandered – and for what, exactly? We told ourselves we were fighting terrorism, even though the Taliban have never been included in the US list of Foreign Terrorist Organizations. We told ourselves we were building democracy, even as we enabled one of the most corrupt governments on earth.

We poured billions into assistance programs that were designed and executed by a small army of highly-paid consultants who never left their heavily-guarded compounds.These are the conversations that many assistance workers are now having in Afghanistan, behind closed doors, after a few drinks on a weekend evening. During the day everyone is busily engaged in touting successes, organizing meetings, writing reports that no one reads, conducting workshops for Afghans who show up just for the lunch and the per diem.

It could make a cynic out of even the most committed Pollyanna. Much of what we have managed to accomplish may well disappear shortly after we withdraw.  The Afghan government still relies on international largesse for 70 per cent of its operating budget,  (See Sigar.org report) and if the money goes, the state may well follow.

Have we failed because we never understood Afghanistan?

And yet it is hard to argue that Afghanistan would have been better off without us. On a recent Thursday evening, I drove through the crowded downtown area near my house, and felt the buzz of life in the city. Shops and stalls were strung with colored lights, balloon sellers roamed the crowds, and delectable smells of kebab and roast chicken filled the air. Families were out with their children, buying shir yakh, a type of Afghan ice cream, or crowding into the Barg Continental for a family meal. It is a far cry from those early days, when the city plunged into darkness and gloom as the sun went down.

Is it enough to justify what we have all been through? I no longer know. I cannot escape the feeling that we have failed – not because we were incompetent, or corrupt, or ill-intentioned, but because we never really understood what we were trying to accomplish. If you don’t know where you’re going, any road’ll take you there, said the Cheshire Cat to Alice.

For me, the time has finally come to leave Wonderland.  With love and tears, I am taking the road out of Afghanistan.

Jean MacKenzie has worked in Afghanistan both as a media trainer and a journalist since 2004.

Ahmed Rashid article in Global Geneva: Is Russia back to old tricks.

Killing the Cranes: A reporter’s journey through three decades of war in Afghanistan. By Edward Girardet. See Chelsea Green Publishing or Amazon.com