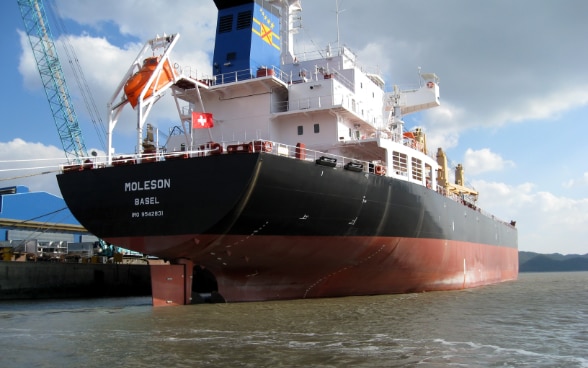 This article is part of Global Geneva’s Focus on Oceans series and appears in the Fall, 2019 print and e-edition.

STROLLING ALONG THE COBBLED-STONE STREETS of Geneva’s Old Town, you can take a quick side-trip by entering the city’s 17th century Hotel de Ville, or town hall, to view the “Salle Alabama”. A dark red-adorned conference room flanked by paintings, this is where, in 1872, the United States and Great Britain agreed to the arbitration of their dispute over the ship CSS Alabama.

The United States claimed that Britain had violated neutrality by allowing five warships, including the Alabama, to be constructed knowing full well that they would eventually enter into naval service with the Confederacy during the American civil war and enable them to conduct raids against the Union.

Other institutions and events also mark Switzerland’s ocean history. The Geneva-based International Committee of the Red Cross (ICRC), whose charter was signed eight years earlier in 1864 in the same room, marking the beginning of “International Geneva”, according to the official tourism site. The ICRC has long depended on humanitarian delivery by sea as part of its world-wide operations.International conferences to codify the customary principles of the law of the sea also have been held in Geneva. The United Nations Conference the Law of the Sea (UNCLOS), for example, met in the Palais des Nations from 1972 to 1982.

For many years, too, the Graduate Institute of International Studies (Institut de hautes études internationales) offered regular courses on the Law of the Sea. Switzerland’s oceans interests have been manifested in trade, shipping, research, exploration and dispute settlement. Thus the Swiss Confederation has pressed for guaranteed access to the seas and has played a pivotal role in securing oceans access rights for all non-coastal and geographically disadvantaged states.

MARE LIBERUM: FREEDOM OF THE SEAS

Since the rise of nation-states with the Treaty of Westphalia, humanity has confronted the problem of access versus control of the seas. When Portugal interfered with Netherland’’s trading in 1602, the Dutch East India Company seized a Portuguese galleon leading to a diplomatic incident and a legal claim. A young Dutch lawyer named Hugo Grotius was commissioned to write the brief in the case which was published in 1609 as Mare Liberum or Freedom of the Seas.

He argued that the “high seas”, which came to be defined as the open ocean existing beyond national control, must be accessible for trade and exploration. “The sea then, like the air, cannot be appropriated,”he noted. This idea that the seas are open to all evolved as the norm of freedom of navigation.

However, access to the sea and the exercise of freedom of navigation depends on geography: the land dominates the sea. This means that countries which host the largest amount of coastal area also control the optimal marinespace. States originally claimed ocean territory sufficient to protect coasts and in those early days, there was only one maritime zone – the territorial sea – whose breadth was the reach of a cannon ball.

In multiple treaties after-wards, territorial sea claims were extended and the customary law of the sea was codified, culminating in 1982 with UNCLOS, the United Nations Convention on the Law of the Sea. The convention basically provided more marine space to countries with broader coasts, leaving fewer high seas.As a result, only coastal states with land can dominate the seas.

So what about the world’s 37 landlocked countries, ranging from Andorra to Mongolia or Kazakhstan? Lacking a coastline, they are at a disadvantage, particularly with regard to trade. They depend on transit over the land territories of neighbouring countries. Thus land-locked states have long demanded recognition by the international community of a fundamental right of ocean access and transit to maritime ports.

Switzerland and Afghanistan at the forefront

In 1919 Switzerland submitted a Memorandum on the Claim to a Maritime Flag to the Paris Peace Conference. “The realization of the principle of free access to the sea…has long been cherished by Switzerland,” it stated. “…the Swiss Confederation would attach great value to a formal recognition of this right by the Powers, all the more so since Switzerland,in spite of her landlocked situation in the heart of the continent has a considerable share in the world’s commerce.

”Switzerland underscored that during the Great War (World War I). The transport fleet of the International Committee of the Red Cross flew the Swiss flag. On the basis of equal sovereignty and for international trade and humanitarian support operations, Switzerland sought recognition of its maritime flag on the oceans, citing the evolving norm of international law that “every State has the right of unrestricted navigation upon the open sea.”

By the 1950s, draft articles on the law of the sea were being reviewed by the International Law Commission of the United Nations. The draft articles, however, contained no provision pertaining to landlocked states. Anticipating the UN Conference that would consider the proposed articles with a view to a binding multilateral treaty, Afghanistan conveyed a note on behalf of such states calling for a universal declaration “stating the right of free access to the sea of all countries whether landlocked or not… and recognizing a universal right to transit by air, railroad, road and water-ways through their respective territories.”

As a Central Asian and Indian subcontinent country surrounded on all sides by the (then) Soviet Union, China,Iran and Pakistan, Afghanistan sought a legal right to transit, particularly via Karachi to the Indian Ocean, as part of ocean access for desperately needed development. The fact that James Michener’s reference in the opening paragraph of his book Caravans to the US naval attaché at the American embassy in Kabul may strike some with amusement, it does underline Afghanistan’s dilemma – and deep concern – as a landlocked country.

Recognizing the rights of landlocked countries

In 1958 the Swiss government convened a conference in Geneva of “States without direct territorial access to the sea”. Kicking off with the 1957 Afghanistan Memorandum and stressing their geographic common denominator, the participating states unanimously agreed that the new codification of the law of the sea must include the rights already granted by jus gentium (the [customary] law of nations) to landlocked countries.

With energetic lobbying by both Switzerland and Afghanistan, the promotion of those norms is now expressed in UNCLOS Part X. Article 125 (1). This proclaims that landlocked countries shall have “the right of access to and from the sea” including “freedom of the high seas and the common heritage of mankind”. It also granted the right of “freedom of transit” through neighbouring‘transit’ countries, such as Austria through Germany or Chad through Cameroon by all means of transport, such as road, rail, air or water.

Afghanistan signed UNCLOS in 1983 but – with ongoing war – has yet to ratify. Switzerland signed in 1984 and acceded to the Convention in 2009. Being surrounded by stable and friendly European Union States, Switzerland can depend on functioning transit agreements. Afghanistan, however, has difficult neighbours.

The Afghanistan–Pakistan Transit Trade Agreement (APTTA) signed in 2010 is supposed to ensure access to Pakistani ports, especially Karachi. Despite this, the agreement has been subject to political uncertainties derived from bilateral tensions, leading to interruption of Afghan-Pakistan border transit. An alternate three-nation transport and transit corridor pact between India, Iran and Afghanistan was signed in Tehran on 23 May 2016. The aim is to secure a Kabul trade route that bypasses Pakistan.

And there is a new factor that will bear upon Afghanistan’s transit trade and ocean access: China and the new Silk Route – overland and maritime. Access to the resources of the water column, the seabed and the coastal shelves has propelled civilizations and development. States lacking sea coasts are geographically disadvantaged.

Oceans enable nations to trade, fight, fish, exchange cultures and beliefs, and generate energy to run lights, vehicles and computers. When political tensions cause suspension of bilateral transit and maritime port agreements, land-locked States can invoke the law. Access to the oceans for all States is now a right enshrined in the international law of the sea—a legacy of Switzerland and Afghanistan.

Global Geneva contributing editor CHARLES NORCHI is the Benjamin Thompson Professor of Law and Director of the Center for Oceans & Coastal Law in the University of Maine School of Law USA.