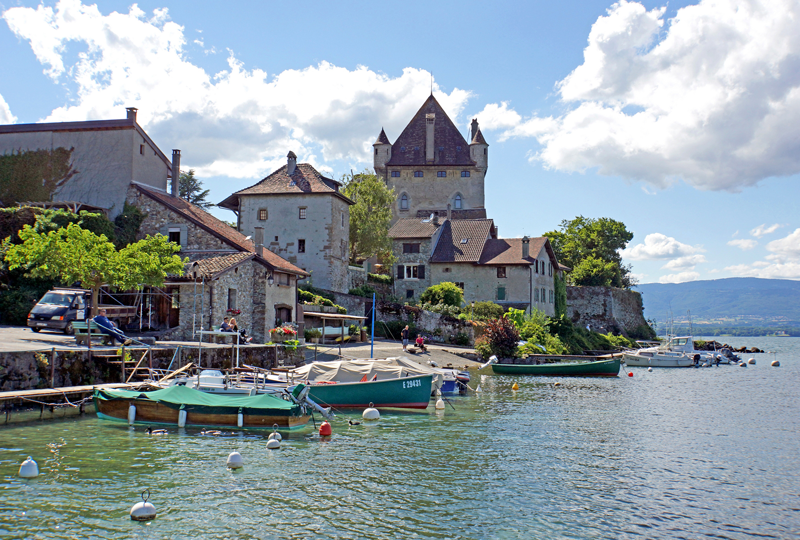 To many who forget its name, this pretty little village across the lake may already be familiar. It tends to be the first place one is escorted to when visiting Geneva. And with reason. Its cobblestoned streets, ramparts and restaurant choices make it the perfect day trip during hot summer months, with boats leaving every 20 minutes from Nyon on the Swiss side. I say Swiss, because Yvoire, one of Geneva’s favourite outings, is actually on the French side of the lake.

In high season, Yvoire embraces more than a million visitors, most of whom at some point must have stopped to chat below my window when I lived there for two years. These visitors usually cross the lake briefly for lunch or to grab a quick souvenir from one of its 65 shops. That whirlwind ‘eat and shop’ tour may be the perfect plan for an initial visit, but what if Yvoire enchants you enough to return? What if your own friends or relatives visit for a day?

Yvoire vaguely claims signs of Roman settlement as far back as the 2nd century BC, but the medieval stronghold we know today really begins to take its present form in 1306. The original fortified chateau, strategically positioned at the crossroads between warring Savoy and Geneva, was burned to the ground during one many local conflicts. It was eventually rebuilt by the Yvoire family, which has lived in it since the 17th century. In fact, the Yvoires were my landlords and owned the flat I rented within the village walls.

In 2006, Yvoire’s 500-1,500 permanent residents (no one seems to know for sure) proudly celebrated seven centuries of the village’s existence. Given this rich history, rushing back to Geneva’s waiting arms would be a dismal day trip outcome. Yvoire has far more than it willingly unveils the first time, preferring to hold back a few tantalizing secrets for those willing to return.

Take the labyrinth of the Jardin des Cinq Sens, which occupies what was once the chateau’s vegetable garden. With its 1,300 medicinal plants and aromatic herbs, its aviaries and fountains and vintage rose bushes, it looks like a formal medieval garden, but with a twist: you’re invited to use all your senses during the visit. (To tell you more would ruin the surprise.)

Though you cannot visit Yvoire’s very-much-lived-in chateau, you can take a 20-minute stroll to the Châtaignière-Rovorée and its magnificent grounds. Not quite a castle, this 24-hectare complex is home to two handsome manors. One of them (Rovorée) is closed to the public and houses the library of the Haute-Savoie but the other, La Châtaignière, is a regional cultural center with regular exhibits. Too tired to walk? A solar-powered boat will drop you off right from the Yvoire dock.

One of the more pleasant local excursions has nothing to do with Yvoire itself, but with the discreet little village next door. After an unforgettable lunch of filets de perche at Yvoire’s Restaurant du Port, walk off your indulgence along Lake Geneva for an hour until you reach the quiet little fishing haven of Nernier. The French poet Alphonse de Lamartine was so seduced by its paved alleyways and stone houses he moved here. Compared to Yvoire’s brashness and popularity, Nernier yields a sober and discreet feel.

Back in Yvoire, those with artistic tastes might enter one of the village’s intriguing galleries, leaving only when the last boat toots its horn. Yvoire has succeeded in promoting artisans and artists, and the result is (mostly) an absence of tacky souvenir shops. A few, though, have managed to edge in.

Yvoire’s metamorphosis has been absolute since the 19th century French writer Alfred de Bougy called it “a jumble of huts on a hill, twisted and rocky streets leading to the lake – if one can give the name ‘street’ to its nauseating passageways that serve more as gutters for manure.” And that is as complimentary as he gets. Of course Yvoire’s present-day residents laugh at that past, having transformed their downtrodden village into one of France’s most remarkable hamlets, a charming fishing port with a picture-postcard perfect view across Lake Geneva.

Leyla Alyanak is a Contributing Editor of Global Geneva and writes about travel at Women on the Road, www.women-on-the-road.com