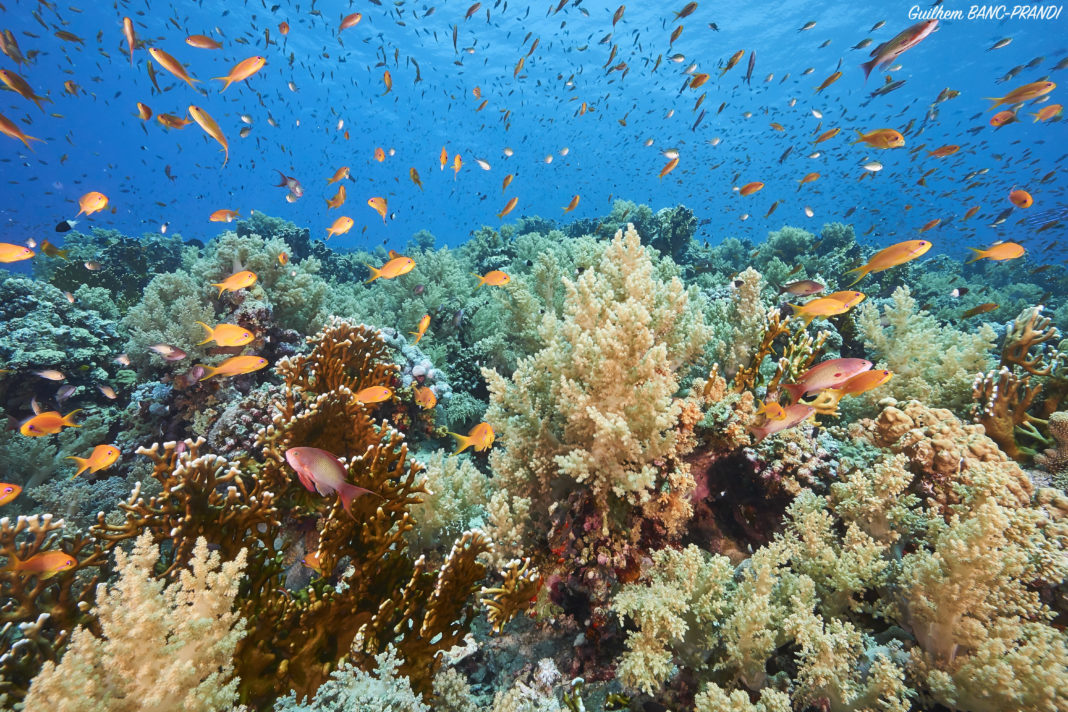 UPDATED 24 June 2021: The following article (SEE BELOW) was first published in April 2019, including in our Special Focus on Oceans 2020 Summer Print/e-edition, which was made widely available on a complimentary basis to international conferences, schools and universities. For the updated June, 2021 article, please CLICK HERE.

This article has also been published elsewhere as part of Global Geneva Group’s policy to make such content available free-of-charge to other media worldwide in the public interest. (If you would like to support such reporting initiatives to help audiences, both young and old, better understand the role of science, conservation and other planetary concerns, then please DONATE.

ORIGINAL ARTICLE BY ANDERS MEIBORN: It’s not everyday a scientist gets to work on a project that has implications of a truly global scope. But recently my research group, along with colleagues from Israel, Saudi Arabia, Egypt, and the United States, have been able to show that the coral reefs in the Northern Red Sea and the Gulf of Aqaba are extremely resistant to the stress of global warming.

This is a small miracle against the backdrop of devastation of coral reefs across the planet. In most parts of the world, corals are dying at an incredibly depressing rate. Entire marine ecosystems are disappearing from year to year right before our eyes.

As critical sources of marine biodiversity, coral reefs host millions of species. They are also crucial to economic survival, whether as a food source, tourism or protection of coastal areas and disaster risk reduction, for up to 500 million people living in tropical countries worldwide. And yet, this extraordinary natural heritage is in the process of rapidly dying from the effects of global climate change, primarily the steady rising of water temperature caused by increased atmospheric CO2 levels.

Take for example the Great Barrier Reef, the Earth’s largest coral reef structure (the size of Italy!). During the past four or five years alone, upwards of 30 per cent of this immense reef structure has come under direct threat of extinction, or has already died off, as a result of global warming.

More precisely, the thermal stress caused by global warming coupled with increasingly frequent heat waves on these fragile organisms cause a disease-like condition known as coral bleaching, which eventually kills these corals.

The picture above shows how these bleached corals look – white as snow. What happens is that as waters warm, the coral starts losing its population of millions of little single-cell organisms, small algae, that live in symbiosis inside the coral cells and give the coral its vibrant colours.

A two-step process leading to death

When this symbiosis breaks down due to heat stress, the algae leave the coral and two things happen:

First, the coral turns white because the white carbonate skeleton they form underneath their tissue becomes visible.

Second, the coral dies, if its population of symbiont algae does not recover within a few days. The coral literally starves to death. This is because the little algae normally provide a major part of the coral’s diet, through the process of photosynthesis, which is the process in which CO2 is turned into nutritional sugars.

The symbiotic algae master this process effectively and feed their coral host by handing them the extra sugar (and other metabolites) they produce, but do not use for their own metabolism. The coral can live from this source of nutrients from photosynthesis alone. But when the algae are no longer there to feed them, the corals die within a matter of days.

And while the white, bleached corals may initially have a beauty of their own, they are in fact in a death process. Because corals are at the base of the reef ecosystem, when they die the result is a dramatic decimation of other biodiversity in the reefs, such as the fish population.

Our teams of researchers have now discovered (and confirmed through numerous controlled experiments) the presence of at least one region on the planet capable of harbouring large and highly biodiverse coral reefs that are much more resistant to the effects of global warming, notably the Red Sea – in particular the Northern Red Sea and the Gulf of Aqaba (see satellite photo).

Here, due to a unique geology and very special evolutionary history, the corals have developed a capacity to tolerate water temperatures much above the temperature at which they currently live. In other words, the Red Sea is granting us an incredible gift, a lifeline of opportunity for the rest of the world, because it sustains a large coral reef refuge capable of resisting global warming.

For the moment, despite the Paris Agreements on curbing CO2 levels coupled with the refusal of many governments to act, it is highly likely that global warming will lift planetary water temperatures by 2-3 degrees C by the end of the century. When this happens, as current indicators and recent extreme weather conditions suggest, all major coral reefs outside the Red Sea are likely to be dead or greatly diminished.

If we manage to ensure that the Red Sea corals are properly protected against local environmental stress, then this region could still host a fully functioning coral reef ecosystem. This, in turn, would serve as an immense benefit to the countries harbouring reefs off their coasts. These reefs could also serve as an enormous repository of healthy, heat-resistant corals that, with further advances in science, might enable reefs around the world to be renewed. For the moment, however, this is not possible.

The opening of new doors and diplomatic possibilities through science

The Red Sea region is host to continuous political tension and conflict, such as the current war in Yemen and the complicated Arab-Israeli relations. Nevertheless, through science we can open new doors and create new possibilities for dialogue. Furthermore, in a part of the world touching on the Middle East, Africa and the Indian Ocean, this is where the International Switzerland community can help play both a key diplomatic and scientific role.

The fact that the Red Sea corals are likely to survive when other reefs are dead, gives us scientists a unique opportunity, notably to understand more thoroughly these unique organisms and the ecosystems they support. For this to happen, however, the only way to secure the reefs of the Red Sea for future generations is to scientifically study – and, above all, manage – this exceptional natural resource on a regional scale and with global support.

A crucial environmental initiative without frontiers

Pollution knows no boundaries and effective environmental protection requires international collaboration, coordination and planning. It is for this reason that we, together with the support of scientific colleagues from the Red Sea region, decided to create the Transnational Red Sea Center (TRSC). Significantly backed by Swiss diplomacy, we are now in the process of pulling together an initiative that will eventually involve at least the eight countries bordering or otherwise linked to the Red Sea (i.e., Jordan, Egypt, Saudi Arabia, Israel, Sudan, Eritrea, Yemen and Djibouti) as part of a long-term ‘cross-border’ scientific collaboration on the Red Sea coral reef ecosystem.

The concept of international scientific collaboration is not new, of course. CERN on the outskirts of Geneva has for years been engaged in ‘quiet’ engineering diplomacy on issues ranging from water to nuclear research involving specialists from all over the world, including countries in open conflict with each other.

The TRSC, however, will be somewhat different. Established at my host university EPFL in Switzerland, it will – when properly funded – coordinate scientific work both at home and in the field. Equally crucial, it will create a new dialogue (scientific as well as diplomatic) to underpin effective regional efforts to protect these unique reefs ecosystems against destruction.

A research environment without borders

Imagine a Red Sea research ship flying the neutral Swiss flag, equipped with cutting-edge scientific instrumentation and enabling multi-national teams from the region, but also the European Union, United States, Southeast Asia and the Caribbean to work together to study the Red Sea corals, despite on-the-ground politics. For this vision to come through, it will require the help of the Swiss Ministry of Foreign Affairs, which strongly supports the project, to negotiate appropriate collaborative scientific agreements that rise above politics.

Many large-scale socio-economic developments are in progress or planned in the Red Sea region for the coming decades. These include a massive urban development project in the northwest of the Saudi Arabian peninsula which, if not properly planned and implemented, could threaten the entire region’s marine biodiversity.

For these reasons, it is important for scientists to work closely with developers in order to help prevent impacts that could undermine the region’s coral heritage, and indeed the financial foundation of the projects themselves. It is absolutely vital that these developments progress in the environmentally most responsible manner. If not, they could result in the destruction of coral reefs on a scale that could prove devastating – and in a matter of few years, humanity would have lost its ‘last reef standing’.

Since 2012, Anders Meibom has been a full professor  in the Institute of Environmental Engineering at the Swiss Institute of Technology in Lausanne (EPFL) and is also professor at the University of Lausanne, in the Faculty Geology and Environmental Sciences. His research group focuses on understanding metabolic processes in marine organisms, corals included, under environmental stress.