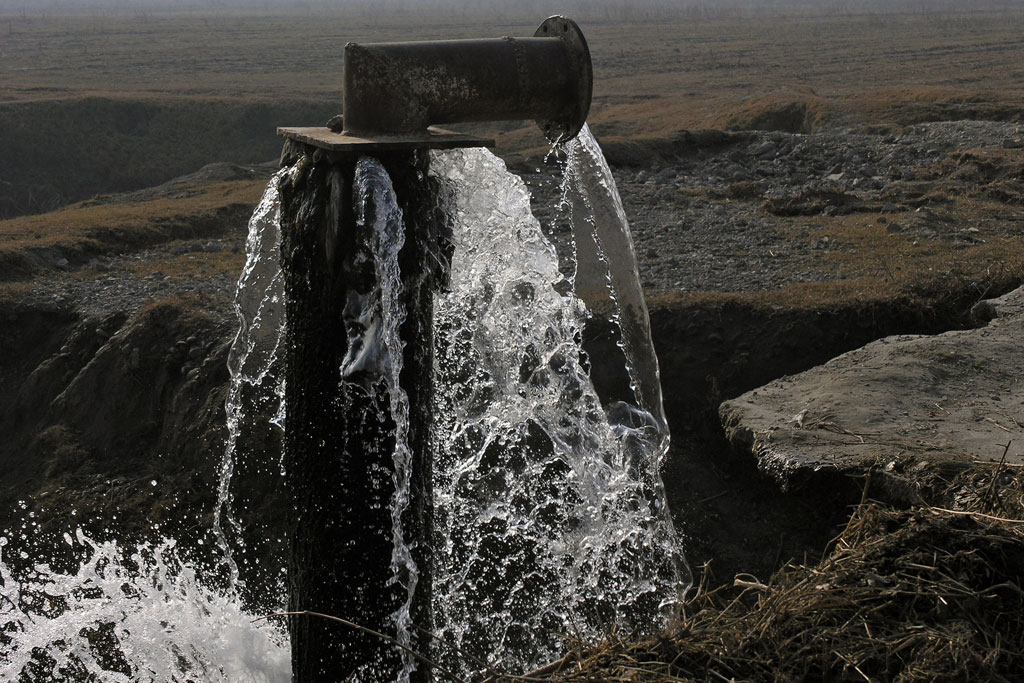 WHEN SWITZERLAND’S FOREIGN MINISTER DIDIER BURKHALTER ANNOUNCED ON 14 SEPTEMBER, 2017, that “Water is a Swiss foreign policy priority,” he was not just delivering an off-the-cuff speech on his country’s commitment to a resource of which it knows it has plenty. Flooding and drought-motivated tensions are affecting ultra-dry regions from Somalia to Mali as well as the disasters that have dominated most of the world headlines and television news spots in recent weeks.

Speaking at the Global High-Level Panel on Water and Peace in Geneva’s Maison de la Paix, a few hundred metres from the Palais des Nations, Burkhalter committed Switzerland to making Geneva the global water capital of peace. With international agreements on peace and water security as scarce as rivers and wells in the Sahel, his pledge served as a launching pad for the historic work of a special gathering of royalty, academics, international experts, diplomats and young water activists who have recognized the crucial importance of this vital planetary resource for human survival.

The so-called Blue Peace initiative for a global framework to promote water cooperation as an instrument for peace began in June 2010, when the leaders of Jordan, Lebanon, Syria and Turkey met to launch a new era of cooperation in the Middle East. They also invited Iraq to join. In the second half of 2010, it appeared that elements of a future Middle East Union were being formed to operate in trade and transit, but also including water and environment. Success has ebbed and flowed since then, partly because of conflicts in the region. 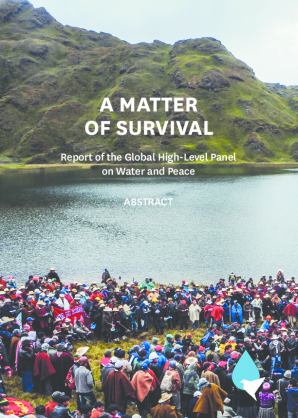 ‘THE DRAMA OF WATER’

Speaking of “The Drama of Water,” the synopsis of the report – A Matter for Survival – says that some “two billion people lack access to safe drinking water. Most of them live in fragile, often violent regions of the world. In contemporary armed conflicts, water resources and installations are being increasingly attacked and used as weapons of war.”

The report highlights water scarcity, exacerbated in a world with an expanding population facing human-induced climate change. But despite such problems, humanity must find out how to produce 50 percent more food and double its energy production by the middle of the 21st century. In the words of panel chairman and former Slovenian president, Dr Danilo Türk, the group believes that international water cooperation needs to be developed – and used – in a big way to strengthen inter national stability and peace, and conflict prevention.

“International Water Law – as developed in two UN conventions on international watercourses and lakes, and in a number of basin-specific agreements – offers a good platform for such a role,” he noted.

Somewhat unusually for such events, but important to highlight the contribution of culture, a special Symphony for Water and Peace, created by composers from different countries, was played at the close of the ceremony. As one participant pointed out, the event was held on a gloomy, rainy afternoon in autumnal Geneva, suggesting an abundance of water which so many other countries lack.

In South Africa’s Cape Town, for example, water was being rationed at the end of the 2017 winter wet season following a year packed with wild floods elsewhere on the planet. Months of water scarcity have raised tension between the local government in Cape Town and tens of thousands of people living in poor and informal settlements around this gem on Africa’s southern tip.

It prompted Helen Zille, the premier of Western Cape Province, to reveal that she only showers “briefly” every third day and that she regards “oily hair in a drought to be as much of a status symbol as a dusty car.”

“The link between the scarcity of water and conflict is well-documented,” said Burkhalter. “Water-related issues have contributed and exacerbated conflicts in Syria, Yemen, and elsewhere. Water has even been turned into a weapon of war, be it through withholding it, contaminating it, or flooding. And competition for access to water is bound to grow, given the growing demand for water, urbanization, ongoing pollution, and climate change.”

An example of acute water shortage and the linkage to climate change lies in the dry conflict, is the Sahel, Africa’s transitional zone between the desert and the tropical south. Until late in the 20th century it was infused with baobab and acacia trees, and covered sparsely with grass. Encroaching desertification is altering the landscape and overrunning precious agricultural and habitable land, a factor in recent regional conflicts.

Although water conflicts proliferate in different parts of the planet, they represent a key focus in the Middle East and North Africa. There are three major river basins in the region: the Jordan River Basin, the Tigris-Euphrates River Basin, and the Nile River Basin. It is a region covering some 11.1 million square kilometers with three main deserts, the biggest which is the Sahara stretching across a massive nine million square kilometres, comparable to the whole of China or the United States.

WATER ON THE SECURITY AGENDA

Yet, Burkhalter said that despite the worrying development, “water is only gradually emerging on the international security agenda. Cooperation in this field has been limited so far.” He noted that while the risk of water turning into a major source of tension is real, “there is much potential to make water a key instrument for cooperation and a driver for peace.” Switzerland sees water being firmly established as a peace and security issue on the political agenda in the same way it has gained recognition as a development issue.

One panellist observed that, as the home of the Geneva Convention which sets out a legal framework for rules in the conduct of conflicts and wars, the city could also add its name to a convention relating to water and peace. The reasoning behind Switzerland’s initiation of the Global High-Level Panel is that it deems it essential to encourage a planet-wide discourse and framework on how to deal with the water crisis and turn water into a key tool of preventing conflict and sustaining peace.

Burkhalter stressed the shared benefits of good and common water governance in watersheds crossing different national boundaries. “They include more trust, better access to water and other basic services (such as energy, agriculture and health), and generally better conditions for sustainable growth,” he said. “This is why Switzerland is committed to promoting transboundary water cooperation, strengthening hydro-diplomacy and pushing to do more to leverage water for peace.”

Burkhalter further singled out as important initiatives that Switzerland intends to push: facilitation, mediation, and hydro-diplomacy capacities for decreasing water-related tensions and preventing such conflicts. “The idea of an impartial clearing house for such activities – what the report calls a ‘Global Observatory for Water and Peace’ deserves to be pursued further – and why not here in Geneva?”