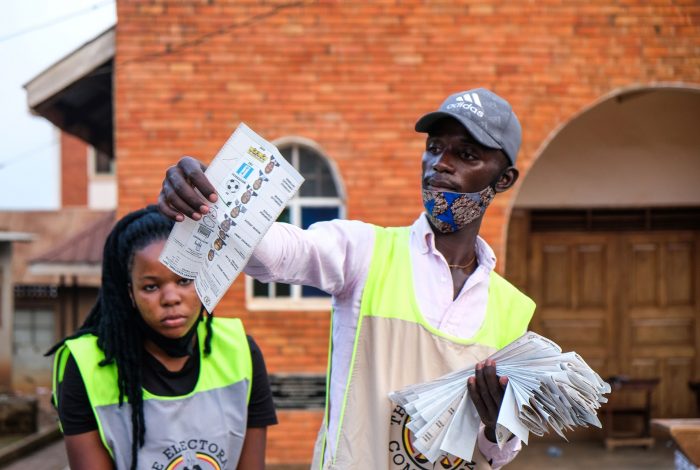 This is a shared follow-up on article on Uganda by Global Insights Magazine/Global Geneva and our media partner, Who, What, Why. (See William Dowell’s earlier piece as part of his regular Tom’s Paine column on Facebook targeting questionable election tactics in Uganda)

While Donald Trump was preparing to scuttle out of Washington a few hours before Joe Biden’s inauguration, Uganda’s 76-year-old President Yoweri Museveni was touting his election victory and a seventh term in office.  Meanwhile, Museveni’s opponent, reggae singer Robert Kyagulanyi, 38, better known by his stage name, Bobi Wine, reported his home is now under siege, surrounded by security forces.

Wine has claimed, much as Trump had done, that the election he just lost had been fraudulent. But that’s where the comparison ends. In contrast to Trump, Wine’s complaints have real legitimacy.

Police and Uganda’s army regularly harassed candidates opposing Museveni in the months leading up to the election, and more than 50 of Wine’s supporters were killed in rioting that broke out in November. At one point, Wine’s entire campaign staff was arrested.

When replacements took up the campaign, they too were arrested. Wine was also repeatedly arrested during the campaign, and Museveni declared massive campaign rallies illegal on the grounds they were likely to spread the coronavirus. Museveni’s campaign suggested that Wine restrict his campaigning to social media, and when that proved extraordinarily successful, it pleaded with Facebook and Twitter to shut off his access.

Global Insights Magazine/Global Geneva is partnering with the Who, What, Why investigative newsportal to help broaden free reader access to independent and critical reporting in the public interest worldwide. Tom’s Paine is William Dowell’s regular column for Global Insights Magazine. A reminder: If you like what we do, then please become a Support Member of our non-profit Global Geneva Group and subscribe to our newsletter.

Facebook and Twitter finally decided to shut down operations in Uganda for the duration of voting. On election day, Wine found himself confined under what amounted to house arrest with a gang of heavily armed police occupying his house. The police countered that Wine was now an important personality, and he should be happy that they were there to ensure his safety. (See Wine talking to the press about Museveni tactics in this video)

Museveni probably did not have to go to all the effort. Many Ugandans still support him on the grounds that he provided stability after a bloody struggle with his predecessor Milton Obote.  After Obote was gone, Uganda had to contend with a two-decade struggle with the Lord’s Resistance Army, a murderous rebel movement led by a self-styled prophet, Joseph Kony, who kidnapped tens of thousands of children and turned them either into child soldiers or sex slaves.  Traces of the LRA continue to operate in the Central African Republic and along the border in the Democratic Republic of the Congo.

Museveni’s ace card in the election was the fact that the 10 opposition candidates running against him sapped each other’s slice of the vote to the point that Museveni probably would have carried the election even if he hadn’t cheated. In Uganda, a candidate who gets more than 50% of the vote automatically wins.

Although Museveni’s supporters were dancing in the streets after his unsurprising victory, only 57 percent of Uganda’s 17.6 million registered voters had bothered to cast ballots. That is the lowest turnout since Museveni has been in office and a possible sign that Ugandans are losing interest in their perennial president.

While Museveni has brought stability to Uganda, the younger generation feels that he has let Ugandan society stagnate in the process. Youth wants change, and Wine, whose music increasingly points to Museveni’s failures to offer anything new, is fast becoming a rallying figure for that change.

Bobi Wine earned an impressive 35 percent of the vote, and even more significant, the National Unity Platform (NUP) picked up 30 seats in Uganda’s 529-seat parliament. Edward Ssekandi, Museveni’s previous vice-president, was defeated along with several members of Museveni’s cabinet. The biggest loser in the election was the opposition party, the Forum for Democratic Change (FDC), which lost 35 seats. Wine won his parliament seat as an independent in 2017 but decided to join the NUP last year. Before Wine, the NUP had not won any seats.

The real issue emerging in the election is the growing divide separating generations. Wine was only four years old when Museveni seized the presidency in 1986. Two thirds of Uganda’s population is under the age of 35. While Museveni has brought stability to Uganda, the younger generation feels that he has let Ugandan society stagnate in the process. Youth wants change, and Wine, whose music increasingly points to Museveni’s failures to offer anything new, is fast becoming a rallying figure for that change. For his part, Museveni insists that Wine represents only poor people and that it is the wealthy, established elite who are best positioned to decide Uganda’s future. The mass riots during Wine’s campaign and his growing support call that logic into question.

Wine, who has time to think about the future, may actually be lucky to have been beaten by Museveni this time around. A number of analysts questioned whether Uganda’s establishment, especially the police and military, would have accepted Wine, even if he had garnered a majority of votes. Sooner or later, change will be inevitable, and even though Wine lost this time around, he has demonstrated that he can be a potent political force in the future.

If he can win the establishment over to his side, he just might have a bright future down the road.