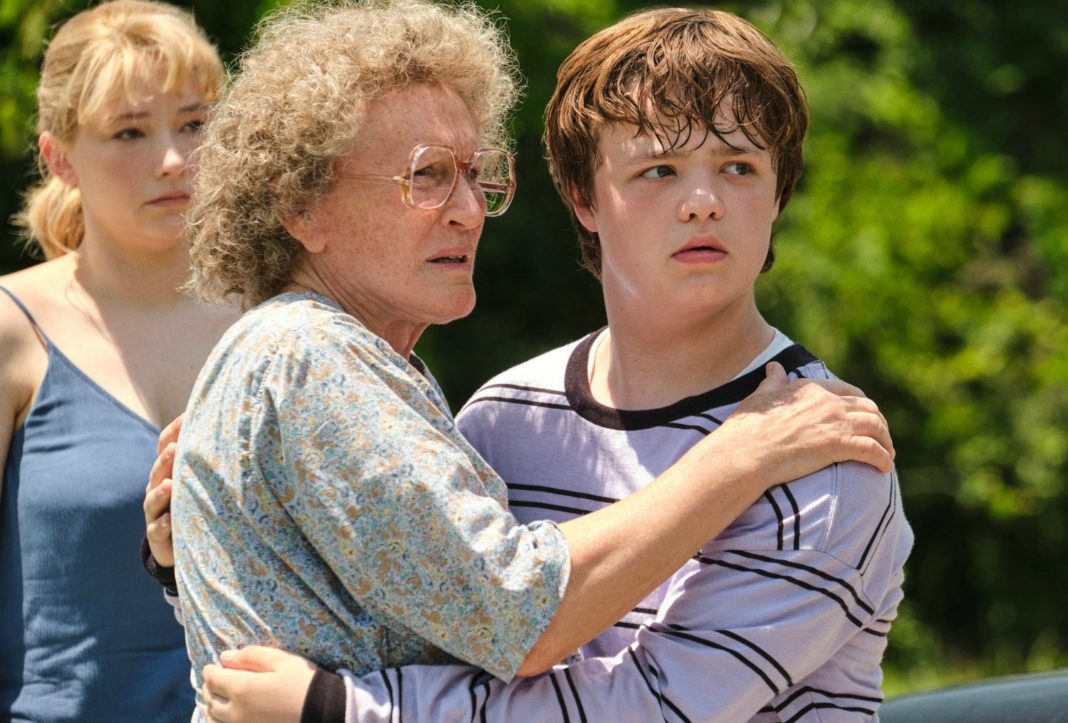 You’re not expecting a masterpiece, given the title, right? But did you anticipate this ordinary ($25m) film from Netflix (See trailer) would cause so much anger among liberal critics, when Glenn Close and Amy Adams are there to give it at least a minimum feel of authenticity? Close has even been nominated for an Oscar as best supporting actress.

FILM REVIEW: The following is a companion article to Peter Hulm’s look at (some) of the Americans who voted for Donald Trump, and why

As reworked by Ron Howard, the phenomenally successful and prolific former child actor and director of many uplifting films, the memoir from a former student of Judge Brett Kavanagh and self-declared conservative Republican, telling the story of a dirt-poor Appalachian child who fights his way out of dead-end life and qualifies as a lawyer, becomes the film most critics hated most this year.

David Sims, in his review for The Atlantic, wrote that the movie boasts an “Oscar-friendly narrative of personal triumph” but argued that it is “also one of the worst movies of the year.” A common reaction when it appeared on Netflix: “The movie fails to express any meaningful understanding of the plight of the American working class, instead caricaturing some of the country’s most disenfranchised citizens for cheap and ineffective pathos.”

Global Geneva makes its content available for free worldwide in the public interest. We also seek to highlight the work of writers, photographers, film-makers and cartoonists as part of our support. If you like our approach to independent journalism and our Youth Writes educational initiative, then please join us as a support member. Or simply contribute. Quality journalism cannot exist without your help.

In fact, Howard’s film, given its premiere on 24 November 2010, does not buttonhole liberals about Trump followers (in contrast to the book). It does show how difficult it can be for poor kids to escape their exploitation and how distant middle-class life can seem from the way they have learned to live.

The New Yorker found it odd for Hillbilly Elegy to focus on an academic dinner where the young man (Gabriel Basso) panics because he does not know what cutlery to use. For New Yorkers it might not resonate, but for many others in the U.S., its East Coast elitism would surely have struck many chords.

Seeking a way out of hopelessness

As with The Crown, the dramatic reorganization (invention) of factual material does not convince. But these days audiences will accept it in favour of a greater truth: that in poor America once (dirty) work has vanished and hill towns have emptied of all but the hopeless, the military can be a way out of desperation, and staying still is hard work: the student “hero” is simply unable to pay his college tuition without three jobs, and taking his chance at a more prosperous life means turning his back on his addict mother.

Only his tough old grandmother (Glenn Close) makes it clear how difficult it is going to be to change his life. His mother, who became addicted while gaining access to drugs as a nurse, forfeits her job for rollerskating through the hospital corridors when high (true), and loses all hope.

In contrast perhaps to the published “memoir”, Howard does not just give us a message that people can break out of poverty if only they work hard, are emotionally tough, and grasp unappetising opportunities. It’s not “if only” but often “only if”. And people who have succeeded are not always dismissive of those who fail.

Glenn Close and Amy Adams (the mother) “are the kind of actors who can make an average movie watchable by their sheer presence” but neither have won an Oscar, despite being nominated seven and six times respectively. More than one critic described the film as “a melodramatic movie made in a lab to finally get Glenn Close or Amy Adams their Oscars”.

I’d be surprised. They turn down their performances way down from the heart-tugging histrionics the Academy likes (think Forrest Gump). I kept expecting them to put on a performance but they are both too smart for that.

The poor are actually good at managing money: they just don’t have any

The film may offer a rich person’s idea of what being poor means (your credit card is declined at a filling station). As 2019 Nobel Economics Prizewinners Abhijit Banerjee and Esther Duflo showed through experiments, the poor are actually very good at managing money. It’s just that they don’t have any, and usually keep very good track of what they have. And we know the credit cards maxing scene in hospital was invented.

Vance himself “started a venture capital fund with Trump fanboy Peter Thiel” and has complained of his fellow hillbillies buying cellphones. He is also a producer of the film. So some of this may have happened. There’s the excuse that J.D. Vance — “easily the most loathsome protagonist since Holden Caulfield” — was in the military and presumably learned the importance of credit cards to American life. In addition, Howard — a good liberal — has said they reached agreement on the treatment, and brushed aside the political implications in favour of a more fundamental treatment of America’s poor vs middle-class mores and economic realities.

Howard does not shirk from depicting the difficulty of a poor American getting health care or rehabilitation without an open pocket book. The key turning point in Vance’s life, according to the film, is when he realizes that his grandmother’s buying an $86 calculator necessary for school forces her to beg from the meals-on-wheels delivery boy for extra food that month because she no longer has money.

I think the critical reviews expected an angry tirade but that wasn’t Howard’s purpose. That is partly responsible for the film’s weaknesses in dramatizing its events (I expected crashing the grandmother’s car to lead to some kind of follow-up but perhaps that is how it was in the book). Howard, whose audience has to be white middle-class America, surely wants viewers to remember what they saw rather than react immediately to the drama. As a result, I think, a number of reviewers found it dull. Given that the screenwriter was award-winning Vanessa Taylor of The Shape of Water and Game of Thrones, it is hardly likely to have resulted from incompetence or inability to create dramatic scenes.

What few critics picked up on is how Vance’s sister (Haley Bennett) sacrifices herself so that her brother can find a better future. Some have noted that Howard foregrounds the women in the film much more than in Vance’s book. Among them, his Indian-American girlfriend (Freida Pinto) whose father came to the U.S. with nothing, but is not entrapped in the systemic exploitation characterizing the American poor. It would have taken us outside the film’s theme, but this is surely an explanation of immigrant-U.S. poor antagonism and envy.

Many critics have also swallowed whole the idea that Mamaw, as Glenn Close is called, speaks the truth. She and Vance are fans of the Terminator 2 film and she speaks of Good, Bad and Neutral Terminators (the film apparently invents the neutral Terminator idea), hinting that her husband, an alcoholic and abusive husband, was a bad Terminator.

One sympathetic review states: “Hillbilly Elegy tries to indoctrinate that beloved national ethos, which affirms you can escape your past, and achieve prosperity simply through hard work and self-determination.”

In reality, Howard’s film undercuts this mentality. Vance’s right-wing politics, whose book cites racist scholarship as well as “a list of myths” about the working class, are of no interest to Howard. “Family is the only thing that means a goddamn thing,” says Mamaw in what the critic does at least realize is an incompatible message. What we see of her daughter is the woman’s hard work, determination, ability and intelligence (we learn she was No.2 in all her school, leading to her hospital nurse’s job). Vance does not escape his past until he turns his back on it despite the emotional cost.

Vance only moves forward when he decides to leave his mother behind after her latest relapse, and drives off for an interview to join the middle class (with the help of his girlfriend) that demonstrates his choice (apparently another invention). But it is not a triumph or a victory.

The flurry of dismissive commentaries for the film, when the polemical book was given such an easy ride in 2016, highlights the problems American intelligentsia face in discussing U.S. inequality. No reference to the classic over-emotional, economic-collapse-as-natural-phenomenon movie The Grapes of Wrath (1940) or even The Devil All the Time (2020), which also has Haley Bennett and pitilessly (i.e. compassionately) dissects the devastation caused by fundamentalist religion in American life. So the Black Lives Matter street rallies and Proud Boy provocations all burst onto the television screens as a surprise, just as the irrational no-maskers in Switzerland seek to publicly and provocatively break the blind consensus on conformity that crowded living in apartment blocks imposes on their lives.

Billionaire investor Peter Thiel is putting $10 million behind a political career for the rightwing author of Hillbilly Elegy. — 15 March 2021

Reviews you may want to read

Is It ‘Classist’ to Think ‘Hillbilly Elegy’ Is a Raging Dumpster Fire of a Movie? — thedailybeast — 24 November 2020

Why does Hillbilly Elegy feel so inauthentic and performative? – vox – 25 November 2020

“The movie is not good. Not only is it a surprising clunker to watch, it also fails to compensate for flaws in its source material (facile ideas about “hillbillies”, a not-very-interesting protagonist) while introducing new problem of its own (baffling narrative structure, forehead-slapping dialogue, and plot devices).”

“Hillbilly Elegy shows the tricky task for Hollywood in trying to surf the political zeitgeist in the age of Trump, where a divided American electorate and a working class that feels alienated from the American Dream defies easy analysis and where a book can seem to capture the spirit of the times one minute only to seem out of touch the next. Ron Howard got caught in a conundrum he couldn’t solve: The politics of the book are unpersuasive at best and possibly wrong at worst, but the story doesn’t work without those politics giving it a narrative backbone. Ironically, Howard probably would have made a better movie if he had been willing to make a controversial one. Sure some viewers would have disagreed with the message, but at least they would have something to disagree with instead of the anodyne offend-no-one-film that resulted.”