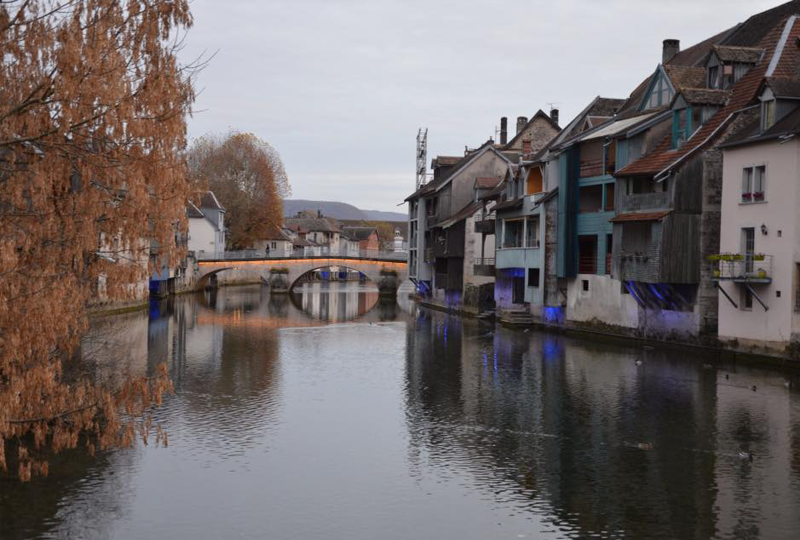 A preferred hideaway for those seeking to escape the urban bustle, you can be enjoying the Franche-Comté is less than two hours, driving (or biking) through the valley of the river Loue, wondering why on earth you don’t escape on weekends more often. Ornans, the birthplace and home of painter Gustave Courbet, is a perfect destination.

Head to Yverdon and then continue towards the French border through the Cluse de Joux with its imposing 11th-century chateau protecting this narrow pass and ancient merchant route that has traditionally linked northern Italy to Champagne and Flanders. Today, the chateau hosts a museum of arms with over 600 early 18th to 20th pieces. Over the seven centuries that followed, the chateau was remodelled and upgraded, most notably by Vauban. Aficionados of defensive architecture can take a guided tour of the hilltop fortress.

The drive into the Jura continues through Pontarlier, not the most elegant town but known as a good starting point for excursions in summer and sports in winter. Pontarlier was famous for absinthe until around 1915, when the addictive drink was banned. The city turned to producing pastis instead. With the lifting of the ban in the 1990s, the distilleries returned to the emerald-coloured liqueur once again, albeit without the key hallucinogenic ingredient, wormwood. If you have time and the Green Fairy beckons, consider a visit to the local distillery or check out the absinthe story at the art and history museum, located in one of the city’s oldest buildings. Or plan another weekend following the new Route de l’Absinthe.

Continue following the N57, but be sure to stop at the Relais du Terroir et Fromagerie Napiot, near the hamlet of La Vrine. The family-owned inn specializes in regional products for which the Jura Mountains are famed, including cheese (Comté, Morbier, Mont d’Or and Bleu de Gex), smoked meats, wines and liqueurs. For a quick lunch, order at the counter but make sure to stock up on locally-produced wine, beer, sausages and cheese. Better still, plan a picnic weather permitting.

Not too far past the fromagerie, turn left at the sign for Ornans and Mouthier Haute-Pierre. Depending on time, take the next turn towards the Source of the Loue, located just before the village of Ouhans. Until the end of the 19th century, the river, technically a resurgence of the Doubs River, was home to a multitude of mills, filling the valley with the sound of industry. Today, it’s a peaceful place to walk and contemplate. Courbet painted the source over a dozen times, trying to capture its grandeur as the river gushes from a deep rocky cavity at the foot of towering limestone cliffs.

For a more active weekend, lace up your boots and walk to the source. The hike starts from a small parking area located on the D67 after the village of Mouthier Haute-Pierre, and takes you on a circuit along the river through deep gorges, climbing to its source. Other nearby activities include mountain biking, fishing and kayaking. About 13 centuries ago, Mouthier Haute-Pierre was the site of a Benedictine monastery; today, it is better known for the production of cherry kirsch, considered among France’s best.

After admiring the views, continue into Ornans, the jewel of this valley and a fine weekend destination. With several hotels, it is considered the prettiest town on the prettiest river in the region. If you prefer a bed and breakfast to a traditional hotel, Le Jardin De Gustave might be a good choice. The guest rooms are individually decorated, while breakfast consists of pastries, homemade jam, orange juice and local cheese and cake. Guests can request traditional meals and are free to relax by the fireplace in the lounge. Another option is La Table de Gustave, also a restaurant, located on the river with views of the town.

Given the names of these hotels, one can guess that a prime tourism focus in Ornans is Courbet himself. Don’t miss the museum dedicated to the painter’s life and work, overlooking the river. Courbet is perhaps best known for his landscapes but, more interestingly, he scandalized the art world by painting life-size tableaux featuring scenes of daily life with ordinary people. Until this ‘revolutionary’ act – at least for critics at the time – this format was reserved only for portrayals of religious or noble historical scenes. He was also known for his portraits of women, many of which are displayed in this small jewel of a museum.

Courbet’s life took a turn with the Commune of Paris in 1871. Taking part in the unrest, he was arrested and blamed for the dismantling of the Vendȏme Column. He was sentenced to six months in prison and ordered to pay the total cost of rebuilding the column. Worse, the art world turned against him, banning him for life from the prestigious annual Salon. Financially ruined, his career in tatters, he was exiled in Switzerland and died a broken man in Tour-de-Peilz near Vevey. The museum in Ornans devotes space to explaining the events of the era, and features items related to their devastating effect on Courbet.

After the museum, be sure to stroll along the river and cross its bridges to admire the mirrored reflections of the buildings overhanging the Loue. The town is best explored on foot, and features several 17th century mansions, notably the hȏtel de Sanderet de Valonne and the hȏtel de Grospain. If a morning with Courbet isn’t your thing, you can visit the Musée de Pȇche for everything you’ve ever wanted to know about fishing.

Before leaving, take the small road up to the Château d’Ornans, perched on the cliff above the river. The drive itself is scenic, winding steeply through the forest to the top with its incredible views of the valley below. A nearby 12th-century chapel is worth a peek as are the ruins of a strategically-placed castle that used to guard the salt route in the Middle Ages, but was then destroyed on orders of Louis XIV when he reconquered the region for France.