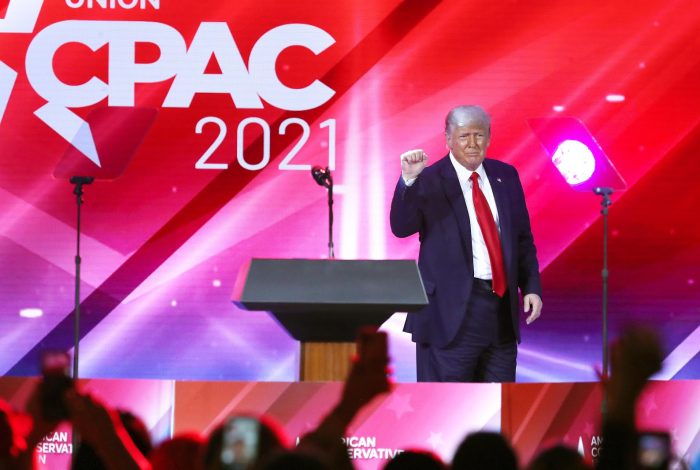 CPAC used to be a hangout for right-wing conservatives — the Republican Tea Party crowd. Not anymore. Conservatism has gone the way of the dodo. A cult of personality has taken its place with a vengeance.

Anyone who doubted the extent to which this CPAC celebrated a personality cult on steroids only had to glance at the 6-foot statue of Donald Trump, sporting shorts and flip-flops, that was wheeled into the Hyatt auditorium. The statue, almost as garish as Trump Tower on New York’s Fifth Avenue, appeared to be made of pure gold. Of course, like Trump and his tower, it was fool’s gold.

When the false idol himself appeared on Sunday, Trump made sure to again castigate the American justice system for not overturning the 2020 election and went off on the US Supreme Court, claiming it was the one that acted shamefully. “This election was rigged,” he declared. The CPAC crowd shouted back, “You won! You won!” and then began chanting, “We love you! We love you!”

To no one’s surprise, Trump promised he wasn’t leaving the Republican Party. And why should he? He’s remade his “beloved GOP” in his own image. Trump even stoked his supporters’ dream that he might run again in 2024, without actually committing himself, even though he is expected to launch yet another super PAC to raise additional millions.

Listening to the former president and others who spoke at CPAC, it might be easy to forget that a mob of thousands of pro-Trump fanatics trashed the US Capitol less than two months ago in an attempt to keep the US Senate from officially certifying the results of the last election — and that many of Trump’s former campaign aides had to be pardoned at the last moment to keep them from doing hard jail time. Political dirty trickster Roger Stone even did a little dance outside the hotel entrance while a performer did his best to rap Trump’s praise and an admiring member of the Proud Boys grinned from the sidelines.

The real question this year’s CPAC raised, however, is what will happen to the Republican Party now that Trump has made it clear that he is determined to continue sucking all the oxygen out of the room. Even more to the point, does anything resembling genuine conservatism still exist?

Trump may be many things, but after spending four years disrupting and trashing virtually every branch of the US government, it is hard to think of him as conservative, unless it involves conserving himself. (See Trump video)

Both the GOP and genuine conservatism itself are clearly at a crossroads. They’ve been there for quite some time. The Republican Party has lost the popular vote in seven of the last eight presidential elections. Republicans have known for a long time that if they want to survive as a political party in a country with an increasingly diverse population, they need to extend their reach beyond wealthy, white suburbia and the mostly rural, white heartland. So far, they have failed to do that.

Trump was able to limp across the finish line to secure an election victory in 2016 by mobilizing a coalition of white racist groups, voters from depressed manufacturing areas, and assorted rural populations, who for the most part had given up on voting until Trump came along. But it was obvious, even to Trump, that if everyone gets to vote, the future of the Republican party is doomed.

Trump’s strenuous efforts to discredit voting by mail were nothing less than an effort at voter suppression and a last desperate hope that the COVID-19 pandemic would keep voters from going to the polls.

Taking that into account, it is not surprising that what was promoted at this latest CPAC conference had little to do with traditional American ideas about democracy. What we got instead was a confusing mix of would-be autocracy, anti-intellectual populism, and a pseudo-nationalism that is veering increasingly close to fascism.

Republican Sen. Mike Lee, from Utah, may have summed up the new direction for the Republican Party best when he issued a tweet last October: (See LINK)

Lee summed it up in a nutshell. But one might ask, “Liberty for whom? Peace for whom? Prosperity for whom?” For Mike Lee’s constituents, the answer is pretty obvious. Utah has a total population of 3.3 million people — exactly 1 percent of the US population. Slightly more than 1 percent of Utah’s population is African American. That is not hard to understand either. Roughly 62 percent of Utah’s population is Mormon — members of the Church of Jesus Christ of Latter-day Saints — and until 1978 the church’s official policy held that anyone who was Black was cursed by the Mark of Cain and consequently better to avoid.

Lee, of course, is only one small part of the Republican coalition that has circled the wagons around Trumpism. Most have flip-flopped so much recently that it is hard to know where they stand. The only values they all share in common are self-preservation and the hope that by tapping into the mob mentality of die-hard Trump supporters, they might somehow advance their careers down the road.

After the assault on the US Capitol, Sen. Mitch McConnell (R-KY) delivered a stirring denunciation of Trump’s unacceptable behavior. McConnell now says he will support Trump if Republicans pick him as a candidate in 2024. Sen. Lindsey Graham (R-SC) has switched sides so often it seems likely that even he doesn’t know where he stands on the Capitol riot these days. One thing is clear: he’s with Trump. Sens. Josh Hawley (R-MO) and Ted Cruz (R-TX) were among the first to try to explain away Trump’s incitement of the riot at the Capitol.

Given the various motivations, it was to be expected that the CPAC meeting would end up repeating the lies and half-truths promoted by the former president. The conference did not disappoint on that score.

Mother, rancher, housewife, and, incidentally, governor of South Dakota, Kristi Noem (R), was one of the few to come close to mentioning the pandemic. Her assessment: Dr. Fauci and the other medical experts who had tried to get Trump to develop a coherent strategy to deal with the pandemic weren’t right all the time. Translation: Despite a half-million Americans dead in just a little over one year, we still don’t need to listen to the experts.

Mike Pompeo announced that now that he is free and no longer Trump’s secretary of state, he can tell the world what he really thinks: A good deal of what has gone wrong in the US can be blamed on China.

But the underlying theme that obviously grabbed everyone’s attention was an ongoing urge to get in line with Trump’s denial of reality by rejecting the results of the last election and with them the basic US electoral process.

Probably no one would seriously compare today’s Republicans to the National Socialists who overthrew the Weimar Republic in Germany in the lead-up to World War II, but it is hard not to notice that Trump’s die-hard supporters have adopted a strategy that is strikingly similar to the German movement’s brilliant propagandist Joseph Goebbels. The most famous insight attributed to Goebbels is that it is easy to kill a democracy. All you need is a “big lie” that you keep repeating until everyone begins to believe it. Interestingly enough, Germany had been one of the most intellectually advanced countries in Europe before Hitler came along. It took him just under a decade to leave it in ruins.

Whether the comparison fits or not, the participants at this year’s CPAC made it abundantly clear that what they are really after has little or nothing to do with traditional concepts of American democracy or, for that matter, the established American system of government — at least as we have known it until now.

What they want is political power at any price, and they have fixed their efforts on the midterm elections that will take place in 2022. Their best hope to regain power is to make certain that the Biden administration fails and that Americans are plunged into even greater despair than that created by the coronavirus pandemic. The bottom line that came out of the weekend’s CPAC conference is that the political forces that will keep us from dealing with the pressing problems that are damaging America are internal. They are sitting in Congress. As political cartoonist Walt Kelly once put it: “We have met the enemy, and he is us.”