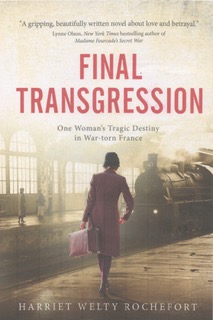 When I sat down to write a novel several years ago, there were a lot of things I didn’t know.

For starters, I didn’t know how to write a novel.  I was strictly a nonfiction writer and not at all sure that I could make the switch from writing newspaper and magazine articles as well as light-hearted books about France and the French to penning a serious novel about a dark period of French history.  Things like building the framework for the story, creating characters and figuring out everyone’s names and occupations and birthdates, then putting these imaginary people into precise settings and letting them go about their business were mysteries to me. The task I set myself was not for the faint at heart.

I didn’t know as much as I thought I did about Second World War history, especially the épuration sauvage (wild purges) that took place in France at war’s end. The purges, in which French people killed other French people in acts of vigilante justice, were central to my story so I had a lot of reading and research to do.

Global Geneva makes its content available for free worldwide in the public interest. If you like our approach to independent journalism and support of writing, then please join us as a support member or contribute. (MEMBER AND DONATE LINK).

I didn’t know, and was surprised to discover, that the more you talk about your idea for a novel, the less you will work on writing it.

And I certainly didn’t know –– and never could have guessed –– that should I ever finish the book, it would come out during a disastrous pandemic that would bring normal life – and book tours –– to a halt. But that, fortunately, wasn’t a worry I had to deal with while writing this novel.

Giving up would have been an easy option

Knowing all that I didn’t know could have, perhaps even should have, discouraged me. It would have been so easy to give up!  But I didn’t, because the story had taken root and wouldn’t go away. It was impossible not to write this story.

The idea for the book came to me in a single moment on a fine spring day several years ago when I was at my French in-laws’ country home outside Paris. On the mantelpiece was a picture of a lovely young woman with dark brown hair worn in the style of the 1940s. She was smiling at the camera and on all fours with a young child – who I later learned was my husband – propped up on her back.  The photo was charming and since I had never noticed it before I immediately asked my mother-in-law who the person was.

“My sister”, she replied. She added: “She died in the War. Pneumonia.”  And that was it.  My mother-in-law loved to talk and would tell wonderfully incomprehensible stories that made  neither head nor tail. But for once she went silent. It was clear that she did not wish to elaborate. I asked my husband about his aunt. All he knew was that she had died in the war.

Delving into a mysterious and concealed past

Time went on and although I didn’t forget the mystery surrounding this hitherto unknown family member, I didn’t try to solve it either. Then, one day at a formal party held at my in-laws’ Parisian apartment for their 50th wedding anniversary, an older gentlemen friend of theirs turned to me as we were having a drink and remarked: “Terrible business about B, really. Never should have happened.” I held my breath. I knew that he was going to assuage my curiosity at last and couldn’t wait to hear what he would say. But my hopes fell as quickly as they had risen. Like many people who are hard of hearing, he was speaking very loudly; it wasn’t hard to deduce that in the smallish room where we were gathered my mother-in-law would hear every word of what he would say.

I changed the subject.

The ensuing disappointment was probably the best thing that happened to me.   I realized that I would never know what had occurred to this real person in actual life but that I could take the barebones of the true event and build on the little that I did know. Since I had heard that B had taken a train from Paris to return to her hometown in the southwest of France at the end of the war, that is what my protagonist did – right at the beginning of the book.  It was a particularly risky time to take a train because the Resistance was blowing up railroad tracks and committing other acts of sabotage. The fact that she ignores warnings not to travel establishes her from the get-go as a woman who is going to do what she wants no matter what. Her decision to undertake her journey in spite of advice to the contrary sets in motion all the events that lead to her tragic destiny.

Getting a story idea is not enough

Now that I had this good start, it might seem that the rest was a breeze.  Mais non!  But the creation of this imaginary woman named Séverine who was beautiful and intelligent and headstrong, even obtuse, did indeed inspire me to continue: to create a countess who was her mentor and protector and a hometown that she loved and where she felt safe. I was getting the feeling of playing God, in fact, and it wasn’t disagreeable.  Since Séverine lived in Paris for a time, I had free reign to decide where she lived, who she lived with (a husband who was a wealthy collaborationist cad), where they went in Paris (fancy dinners at Maxim’s, for example).

Since she had grown up in a small town in the Périgord, I travelled there to soak up its particular ambiance of wine cellars and castles. I also made up an imaginary town, a composite of the real village and surrounding ones, and consulted the local archives (I also ate a lot of foie gras while on my mission).

My personal library grew fat as I collected and read scores of books both in French and English on the Nazi occupation of France, the shock of the German invasion and lightening victory, the Exodus as Parisians fled from Paris to join millions of displaced Belgians and Luxemburgers on the road. I devoured books about the épuration sauvage or wild purges at the end of the war, particularly in the provinces and in Périgord, in which an estimated 10,000 French men and women accused of collaborating with the enemy were killed in acts of vigilante justice (legal trials came later with 300,000 acccused and about 600 death sentences.) At this period of time the score settling was political, but oftentimes personal.

Although I had seen many pictures of wartime France, I didn’t fully realize how hard daily life was under the Occupation. I learned, for instance, that the legal food rations were half of what is considered necessary to survive – not because there was no food but because the Germans took the food for themselves. I remembered a day in my mother-in-law’s kitchen when I was blithely peeling potatoes, leaving thick pieces of skin on the counter. My mother-in-law looked at me aghast and gently commented that it was obvious I had never lived through a war. I thought it strange at the time but now I understand –– and how.

She was a woman who ate almost everything, but she told me that after the War she could not bring herself to eat a rabbit, fearing that it might be a cat because that happened so many times during the war.  The French were hungry, for sure, and they were cold as well.   Sartre and de Beauvoir were writing in cafés, not to be sophisticated, but to be warm – as were many French people who flocked to cafés to flee the homes they couldn’t heat because the Germans controlled the coal.

Shut up and write

In the beginning, I was so thrilled by the results of my research and the imaginary world I had created that I talked – endlessly – about my novel to anyone who would listen. Soon I discovered that all those words that so easily and eloquently flowed out of my mouth shriveled to nothing once I got back to the computer to write them down. I eventually learned my lesson and to “shut up and write”. Talking rather than writing is deleterious because writing is work of an inspired nature – but not only. It is technical and requires the writer to sit alone to figure out the process, what will be put down where and whether it holds together. It is painstaking and exhilarating. It cannot be done while talking.

My novel, which was published in June this year, came out at what was probably the worst time for a book to hit the market. The coronavirus pandemic had stopped book tours, bookstore signings and personal appearances in front of audiences. Fortunately, it did not diminish the interest for books. On the contrary.  Suddenly authors, myself included, were connecting to their readers via zoom or other online outlets to present their books.

On a recent evening, as I sat in front of my computer staring at the little rectangular squares filled with people who had come to hear me talk, I couldn’t help but laugh to myself. During the session I noticed that one woman had made herself so comfortable that she was in her bed; another asked a question that wasn’t a question but a means for her to promote her own book. And yet another – someone I knew well from a past life – showed up disguised and under a false name.  I was amused to see the participants coming alive, each in their own way, on my screen. All this – with the exception of the lady on the bed – might have happened in a “real” meeting but I was amused to see all this happening on my screen.

Those audience antics were yet another novel experience in a series of the many novel experiences I encountered while writing my first – and I hope, not my last – novel.

Harriet Welty is the author of French Toast, French Fried and Joie de Vivre. Final Trangression is her first novel. Information on Final Transgression can be found at www.understandfrance.org/Books/Transgression.html  and the book is available at select bookstores as well as on Amazon both in Europe and North America. Living in Paris, Welty is a former journalist who has worked for TIME and other news organizations.