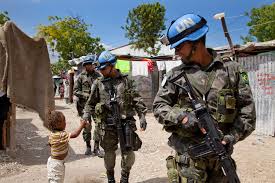 A slightly shorter version of this article was first published in the Oct/Nov. 2017 print and e-edition of Global Geneva magazine.

THE UN WAS CREATED IN 1945 not only to maintain global peace and security, but to achieve more effective international cooperation. Critics, however, like to point to the UN’s inability to halt notorious crimes against humanity, such as the Cambodian and Rwandan genocides, the massacres of Srebrenica, in South Sudan and the Congo, as well as the wars in Yemen and Syria. The Security Council, for example, was paralyzed during the Cold War, but the same thing is happening with the rise of nationalism and religious extremism in many countries, such as the Burmese military’s hounding of the Rohingya.

None of this augurs well for a reform of the Security Council. Its five permanent members tend to veto any resolution affecting their interests or those of their client states, such as Syria for Russia and Israel for the United States. On the positive side, many governments consider that obtaining a Security Council decision is crucial to give the stamp of legitimacy to any form of international intervention. This includes the use of UN-led peacekeeping operations.

THE U.N. HAS NO REAL CONTROL OVER ITS PEACEKEEPERS

One problem, however, is that the UN has no standing security force of its own. This means that participating states contribute their own military and police personnel. Some nations, such as the Irish and Fijians, have even made peace-keeping a speciality. While identified as UN forces by their blue helmets and badges, the peacekeepers nevertheless wear their country’s uniforms, and they remain under the authority of their own commanders.

The first UN peace-keeping operation was the United Nations Emergency Force on the Egypt-Israel border in 1956, following the Suez crisis. By mid-2017, there were 112,911 troops, police and civilian personnel involved with 16 UN peacekeeping operations. Such interventions are not without danger or cost. Since 1948, some 3,557 peace keepers have died; 1,776 alone in current operations. The 2016-2017 deployment bill is roughly $7.87 billion.

“The UN’s policy is morally unconscionable, legally indefensible and politically self-defeating. It is also entirely unnecessary.”

Over the years, UN operations have come under severe criticism, both for the behaviour of its troops and organizational practices. One major controversy blew up over the accidental introduction of cholera in Haiti by Nepalese forces in October 2010. Some 9,000 people died.

Rather than openly debate or rectify the issue, the UN has sought to absolve itself of all responsibility. As part of a long-standing but highly counter-productive approach, the UN Secretary General – presumably advised by the UN Office for Legal Affairs in New York – argued that no government can be held liable.

In his October 2016 report, UN Special Rapporteur Philip Alston criticised the UN for rejecting any form of compensation, while at the same time claiming absolute immunity. “The UN’s policy is morally unconscionable, legally indefensible and politically self-defeating. It is also entirely unnecessary,” Alston maintained. As both he and others believe, a new approach is urgently needed, not only for situations such as Haiti but also human rights abuses brought about by peacekeeping contingents.

Such chastising obliged a UN spokesman to admit that the organization needed to do more about Haiti, yet also reiterated its unchanged legal position. The UN finally offered a $400 million aid package, half to help affected communities, the other half to pay for cholera eradication and improved sanitation. This belated, yet unfinanced plan, however, completely failed to face up to the UN’s own responsibility.

One particularly odious crime perpetrated by UN peacekeepers involves demanding sexual favours from minors in exchange for food or money. Despite asserting “zero tolerance” on all forms of sexual exploitation, the UN – for the moment – can do little to enforce its position.

The national officers in charge are formally responsible for maintaining discipline, including punishment of offenders. All the UN can do is issue policy instructions, and, in some cases, send peacekeepers home.

There also appears to be a general reluctance to crack down on abuses, particularly if they are brought to public attention. The case of Swedish whistle-blower

Anders Kompass illustrates the UN’s acute embarrassment regarding such cases. The Swedish diplomat, a Field Operations Director for the UN High Commissioner for Refugees (UNHCR), leaked a confidential internal report on child abuses in 2014 by French troops in CAR to the Paris authorities. Kompass found himself condemned for misconduct and suspended from his job. An independent panel later found that the charge of misconduct was “disingenuous” and that three senior UN officials had abused their authority. In May 2015, the UN Appeal Tribunal ordered the UN to lift his suspension as prima facie unlawful. Fourteen months later, Kompass resigned after 21 years in UN service.

What such incidents demonstrate is that the UN needs to act more in the public interest by halting its retaliations against the whistleblowers and instead focus on conducting proper investigations against alleged perpetrators. There is no room for privileging political considerations at the cost of UN integrity.

PEACEKEEPING REPRESENTS ONE OF THE MOST COST-EFFECTIVE OF UN INITIATIVES

The world clearly needs peacekeepers. The Uppsala University & Peace Research Institute in Oslo found a direct correlation between increased deployment of ‘blue helmets’ and the gradual decline in the number – and severity – of armed conflicts worldwide since the mid-1990s. Peacekeeping operations not only reduce the level of violence, but also the duration of conflicts. They represent among the most cost-effective forms of intervention in the UN’s toolkit.

For peacekeeping operations to serve their purpose, however, there needs to be real reform. Without doubt, the UN is a frequent target for attacks as a “bloated bureaucracy of overpaid staff” or “underwhelming leadership”. But the UN does suffer from a serious lack of accountability and trust in senior officials who are often more involved in dysfunctional political intriguing than in ensuring the effective management of their staff.

US diplomat James Wasserstrom, for example, was forced out after disclosing alleged kickbacks involving politicians and senior UNMIK (UN Interim Administration Mission in Kosovo) officials. He was awarded $65,000 by the UN Dispute Tribunal, but this was later vacated on procedural grounds by the UN Appeal Tribunal.

In another case, according to two 2013 UNDT judgements, former UNHCR senior investigation officer Caroline Hunt-Matthes, was unlawfully retaliated against for reporting irregularities in the UNHCR Inspector Generals’ Office through internal channels.The corruption she reported included obstruction of the rape of a refugee by a UNHCR official in Sri Lanka. The UN Ethics Office has remained silent regarding its failure to protect. Instead, UN lawyers appealed on technicalities but the facts were not disputed. Her litigation now continues into its 14th year.

This failure to provide impartial oversight and to protect those who speak out is one of the UN’s biggest problems. From its creation in 2006 until 2014, the UN Ethics Office received 447 allegations from staff complaining of retaliation for revealing wrong-doing. It only identified four as legitimate. Such approaches need to be completely overhauled given that they discourage whistleblowers from reporting corruption. Equally to the point, it is a violation of their human rights. The responsibility of UN host countries such as Switzerland to whistleblowers should be re-examined, especially when reports constitute crimes in national jurisdictions.

In May 2017, UN Secretary-General Antonio Guterres seemed to be moving in the right direction by emphasizing the need for the UN to reform and adapt. He also approved a whistleblower policy. Various member states reiterated this need for change at the General Assembly in New York in September.

But for such assertions to be taken seriously, even in an atmosphere where UN employees are no longer afraid to voice their concerns, the UN is going to need more than just the creation of an ‘independent’ Ethics Office. The unit will require real power to act, rectify injustices and provide compensation. Speedy investigation with transparent procedures and protection for whistleblowers are just the start. Peacekeeping nations themselves will have to start taking immediate and forceful responsibility for the abusive acts of their personnel.

Yves Beigbeder who cut his teeth as a legal aide to the French judge at the Nuremberg Trials lives as an author and legal counsel in Thonon, France, overlooking Lake Geneva.

Whistleblowing: Time for international Switzerland to meet the global standard