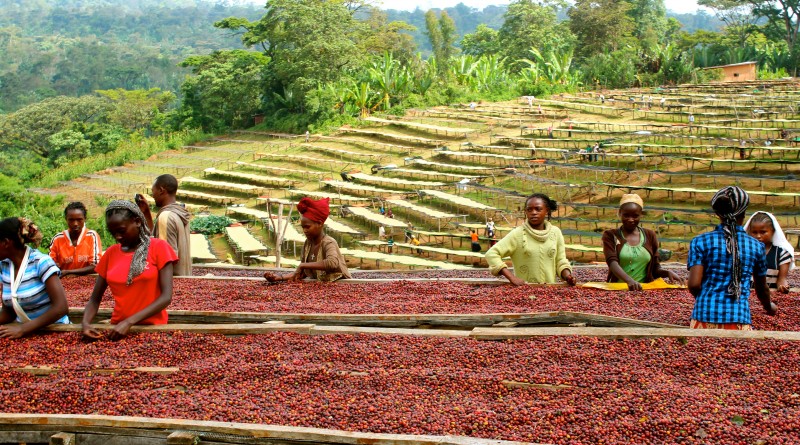 Agents Provocateurs is a print and online oped section open to all members of the Global Geneva Support Community or at the specific invitation of the editors.

As you sit drinking your tea or coffee reading this article, it is worth noting that of the four Euros you paid in the café, the South American farmer who produced the coffee beans was lucky if he got eight cents and the Grenadian nutmeg that you sprinkled perhaps two cents on the dollar. The exclusive West Indian cotton shirt that your wife bought for you while on your trip to New York at Christmas probably cost $300; the West Indian farmer got less than five dollars on the original cotton.

And those top of the range CHF 200 golf gloves made from the leather of the nearly extinct capra goat in Ethiopia enabled the farmer (or poacher) to be paid $1 for the hide which is known for its durability and lightness. Then comes the gift you made to your wife of that exclusively-branded Shea butter, which retails at a $1000 per kilo in a chic Bond Street store, and yet the female former child soldiers in South Sudan who produced it were ecstatic to be paid 50 cents.

But this is still better than the “Masai look” chemise from a Milan fashion house on the Via Montenapoleone, which paid exactly zero to the Masai nation for using their unique cultural brand. I could go on, but you get the point. There are numerous products from the developing world for which you – as a customer – pay top dollar and yet the producers themselves barely receive two cents.

The point being is that there are many developing world value-added products that are treated as commodities at source but as “premium goods” when branded to western ‘end’ consumers – where 98 per cent of their intangible value goes to “middle men”.  This market is huge. Indeed, USAID and DFID-funded research indicate that in Africa alone, over 200 such value-added products are worth $25 billion.

There is an additional social element to all this. The further you are from a port, the less likely as a community you can compete on the narrow and volatile margins of a commodity price. Development is strewn with the victims of this volatility. And there are numerous other impacts, notably the destruction of local heritage and natural wildlife resources. It also aggravates conflicts between farmers and conservationists. Or, in worst-case scenarios, they fuel the world’s fourth largest illegal trade: animal trafficking. Not only can the African elephant expect to be extinct in the wild within 15 years, but, as Time magazine reports, the ivory trade significantly funds international terrorism.

So how should such ‘abuse’ be tackled? A traditional response is increased government spending. But donor support is increasingly under pressure from other “more pressing” issues, such as migration. Another is to appeal to the world of foundations. However, such institutions represent a highly inefficient form of capital and incentive structures. Furthermore, the extent of their contributions – in real terms – has been more or less flat over the last ten years. At the same time, the number of charities and social enterprises looking for capital has grown by 40 per cent.

Or maybe you are a stage further and now looking at impact investing or venture capital opportunities. As the G8 Impact Investing report suggests, this can mean seeking social entrepreneurs to address these issues bilaterally. Or as some government funders argue, going down the value chain and moving manufacturing to these countries. “Let them make the underpants” as one major development finance institution memorably put it at a recent conference.

The good news is this can now be done with “Intellectual Property Value Chain Capture.” To you and me, this means trying to rope in more of the brand value paid by the consumer to the benefit of the  local communities and farmers.

By taking control of the brand and the IP (Intellectual Property – See Pie Charts)can ensure that the producing community receives a more equitable share of the final retail value. It also links the return directly to the farmer and community. This is based on the less volatile and higher retail price rather than the commodity itself.

One of the clearest examples is Ethiopia, the home of coffee, where actual returns have increased by 275 per cent. This includes a rise of over $100 million in coffee exports resulting in the doubling if not tripling of the income of the farmers themselves. http://lightyearsip.net/ethiopian-farmers/ Similar initiatives are being pursued with Shea Butter in South Sudan, where women and former child soldiers are the primary stakeholders. In the same way, the African IP Trust https://africaniptrust.org/ has been seeking to recapture the cultural brand value of the Masai in East Africa resulting in direct benefits for the tribe itself.

All this is not an iteration of free trade where the consumer pays a little more for a “Fair Trade” label. Instead, it is a process aimed at fundamentally shifting the terms of trade – in essence “Trade for AId, but get Paid”

Lightyears CEO Ron Layton was recently invited to explain the concept to the UK All Party Trade out of Poverty Group chaired by the former CEO of HSBC Lord Green. This resulted in a reconfiguration of the process whereby the focus is no longer on replicating one-off projects, but rather creating  a large-scale replicable process in partnership with other major social and commercial organisations as well as UN Institutions. Indeed, given the clear cash flows created with IP structures, there are now significant opportunities for working with enlightened banks seeking credible impact investment offerings. Even more enticing, is the possibility of creating another impact Investment asset class like Green Bonds, which is now well on the way to becoming a $75 billion market. These are among the few concepts that you find in Impact Investment that offer large scale replicability with both social and economic returns, something which is rarely found on one-off VC Impact Investments.

But would corporate players not see their margins eroded? This would certainly be the case with the traditional model whereby the more you screw down the margin of the farmers, the better your return. However, as smart corporates are learning, the IP approach is a highly effective way of differentiating and enhancing product offerings, thus securing margins consistent with the values of their western customers.Even more significantly, it does not damage their brands to future customers the developing world, a potentially massive markets. Most marketing research now indicates that Millennials are increasingly sceptical of traditional brands. The future lies in working with social brands in win-win scenarios that retain customer loyalty.

Finally, we need to build infrastructure to scale, not just in an IP silo. This means working with impact platform providers in the US, UK and Switzerland, much in the same way banks moved from product silos to customer-focused models. This requires a more open framework that can be replicated in a manner that will draw numerous players, thus compounding the network effect. It is while building “the plumbing” across the same social value chain that this architecture could  be applied to a range of social issues at much lower cost.  The key, however, is not to replicate infrastructure, but rather to create a new ecosystem paradigm with impact.

Arthur Wood is a former Bank Director of an award-winning Financial Product Development team. First joining Ashoka in 2005 as a Leadership Group Member where he conceptualized the Social Impact Bond. He is recognized as Impact Investment pioneer.

This concept was included in that report which has  just been issued. http://tradeoutofpoverty.org/about-inquiry/

To this end  published with academic Meg Brindle a book was launched this week through Rutledge called “Social Entrepreneurship and Development”  – noting how such a strategy can be created. As a special offer of to readers of this article add in FLR40 to get 20 per cent off.

Whistleblowing: Time for international Switzerland to meet the global standard